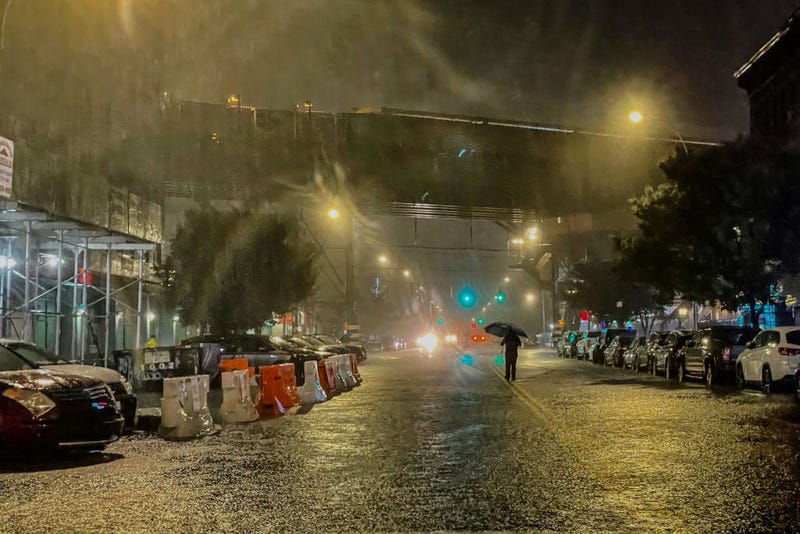 A person makes their way in rainfall from the remnants of Hurricane Ida on Sept. 1, 2021, in the Bronx. Photo credit David Dee Delgado/Getty Images
By Steve Burns

NEW YORK (WCBS 880) — New York City lawmakers on Tuesday were tasked with figuring out if the city was partially to blame for the devastation caused by the remnants of Hurricane Ida.

According to Councilman Yoanis Rodriguez, the storm was unprecedented but, “we were not prepared as a city.”

At a hearing examining Ida’s impact, he asked the group of city officials testifying on Tuesday if more could not be done.

“Did the homeowners receive a notice that their basement could be in risk?” he asked.

“That is not in the current messaging and that's what the mayor has addressed in the extreme weather task force,” said Emergency Management Commissioner John Scrivani.

Dozens of messages went out prior to, and during the storm, but none warned about the potential for basement flooding.

A total of 13 people died in flooded basement apartments throughout the city, and many have been left wondering why there were not more evacuation warnings.

Scrivani said the city will be more proactive in sending notifications to New York residents and letting them know about the changing situation during the next storm.

“I think we've learned that we just have to be hyper aggressive with letting people know what we're seeing,” he said. “We can't be reliant on people's apps on their phones or watching the news for the weather.”

Meanwhile, city lawmakers are also pushing officials to prioritize upgrades to the city’s sewer system. Though, Vincent Sapienza, Commissioner of the City's Department of Environmental Protection, noted the system worked as it should.

“It was just designed and built for a different time,” he said.

The sewers can handle around an inch and a half of rain per hour, but twice as much fell during Ida.

Sapienza believes replacing the entire system, however, would be too difficult.

“To say we're going to rip out the entire 7,500 miles of sewers and put in sewers twice as big – it's not gonna happen,” he said.

Councilman Justin Brannan understood the concerns but added that the city should prioritize upgrades in areas that are prone to intense flooding.

He also notes that hard, impermeable surfaces, such as concrete and asphalt, make up about 70% percent of the city – making it prone to flooding.

“The city was not built to handle such intense rain,” Brannan said.

He wants to see more green infrastructure projects in the future, that use the ground to absorb water and keep it out of the sewer system in the first place.