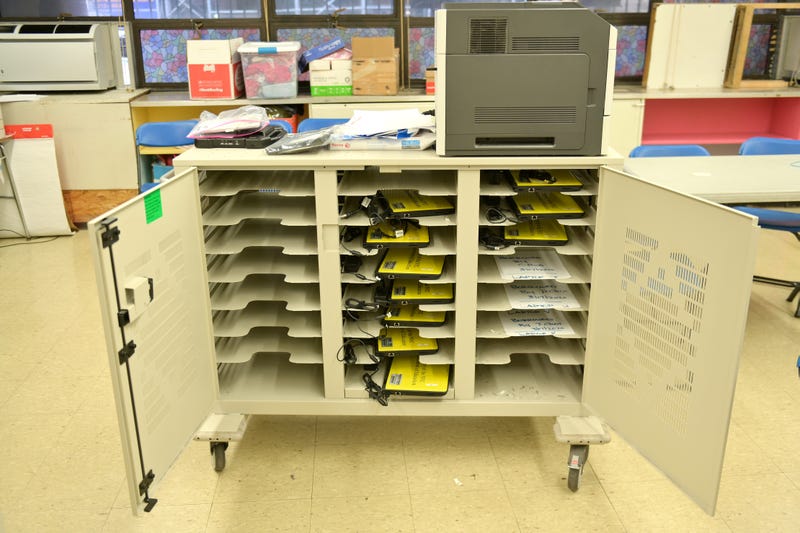 A cart is used to hold and organize school-owned laptops to be distributed to students in need for remote learning in Manhattan. Photo credit Michael Loccisano/Getty Images
By Kristie Keleshian

NEW YORK (WCBS 880) -- The Legal Aid Society is threatening to sue the de Blasio administration if it doesn’t fix internet connectivity issues at city shelters that are causing problems for homeless students trying to learn remotely.

The organization says families from at least four shelters across the city report having internet issues, making remote learning difficult or impossible for students amid the pandemic.

“It’s the city’s problem to create a system to solve all of these issues so that the kids can connect,” said Josh Goldfein, a staff attorney with the Legal Aid Society.

Late last week, the organization sent a demand letter to the de Blasio administration giving the city until Oct. 15 to respond to the issue or face a lawsuit.

The de Blasio administration has not yet responded to the letter.

Goldfein said the issue has been brought up consistently to the city since March and that it’s been a blame game between the Department of Homeless Services, Department of Education and T-Mobile.

“The best solution to the problem would be permanent housing, but as long as we have tens of thousands of people in the shelter system, then it’s the city’s obligation to make sure that the kids in shelters can connect to the internet and go to school like everybody else,” he said.

Goldfein said the problem has an easy solution: “They could open up Wi-Fi access at some of the shelters. They could improve the T-Mobile situation. They could provide a troubleshooter at every shelter who could just sit down with each family and say, ‘What problem are you having and how can I help you fix it?’”