NEW YORK (WCBS 880) — A recent college graduate has found a way to help people living on the street one sock at a time.

As a sophomore at New York University in 2014, Adina Lichtman, of West Orange, New Jersey, saw homeless people on the street and started to make them sandwiches.

“One guy said, ‘Ma’am, it's so nice you're giving out sandwiches, but one thing we could actually really use are a pair of socks,'" Lichtman recalled. “So I decided to knock on every door of my floor, and in about 15 minutes, I got over 40 pairs of socks.”

That was the inspiration for her nonprofit Knock Knock Give A Sock, of which the recent college graduate is now CEO.

The mission has since blossomed and the effort has gone from college campuses to corporate involvement.

According to its website, Knock Knock Give A Sock "aims to humanize homelessness one sock at a time by turning transactions of sock donations into meaningful interactions where neighbors can get to know one another."

The organization uses a two-step process that first involves encouraging a company or community to host a sock drive for those living in local homeless shelters.

Then, Knock Knock Give A Sock helps host a "Meet Your Neighbors Dinner," which brings the two groups together and turns "the transaction of simply donating socks into an interaction that further the aim of breaking stigmas while breaking bread."

During one event, employees of SalesForce sat down for a meal with a group of homeless people and the effort has been repeated dozens of times with dozens of companies.

“People were saying, 'Adina, we can’t tell who’s homeless and who’s not,' and people were just seeing each other as people," the 27-year-old Lichtman said. 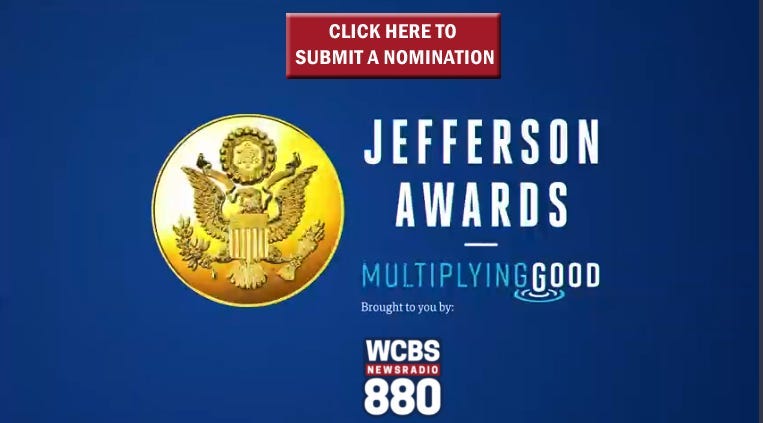 “People do a lot of talking in this business. There’s a lot of promises, there’s a lot of hot air, there’s a lot of empty words and it's just nice to have someone that follows through," said Will Woods, who worked for a big corporation until illness drove him to unemployment and homelessness.

He is now an administrative associate at Knock Knock Give A Sock.

So what is it that makes Adina such a moving force?

That's what makes Lichtman a difference maker and now a Jefferson Award winner, thanks to our partnership with Multiplying Good.

To tell us about a Difference Maker in your community, we invite you to share their story and nominate the person or group for a Jefferson Award.