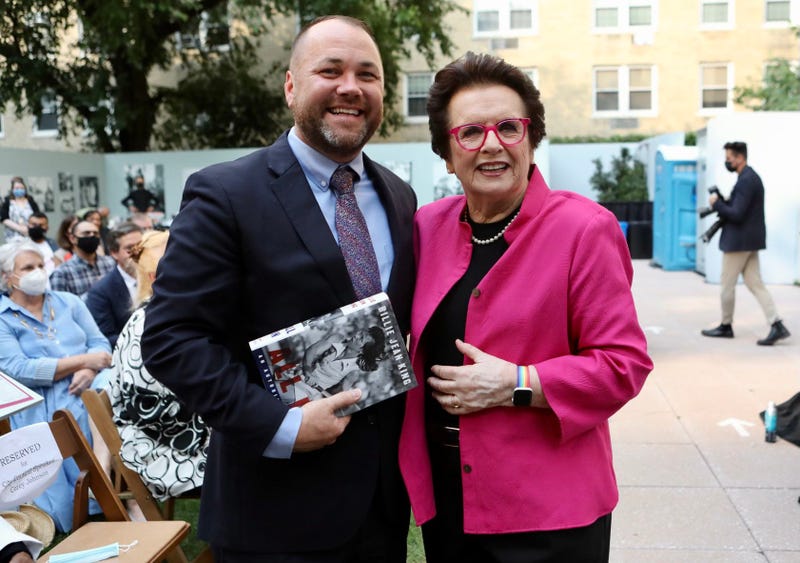 It was announced in July that the New-York Historical Society would be expanding its home on Central Park West by more than 70,000-square-feet in part to house the museum.

“There are many places in the world where people fought struggles, unquestionably, and many, many people who did the right thing and suffered often for it, but there's no place where it crystallized like it did here. So, it is rightful that this museum will be here,” said de Blasio.

In the expansion, which will include space for new galleries and classrooms, the historical center will create a dedicated space for the United States' first museum dedicated to LGBTQ history and culture.

“Some people change the world profoundly, and Billie Jean King, someone who captured the hearts, the admiration, the respect of this nation, as both athletes and activists,” said de Blasio about the 39-time Grand Slam winner.

Ground was broken today at the future home of the LGBTQ History Museum at @NYHistory! A great moment for the community. Great to see the legendary @BillieJeanKing, an inspiration to us all. pic.twitter.com/EeJbjxVz94

Johnson particularly spoke with pride about the museum, as he is the first openly gay man to be New York City Council speaker.

“Without the stories of our pioneers, I wouldn't be who I am today. They're what will continue the LGBTQ movement, and I can't wait to see it,” said Johnson.

As the first openly gay man & HIV+ person to be @NYCCouncil Speaker, it was an honor to be at @LGBTQ_Museum’s groundbreaking ceremony.

Without the stories of our pioneers, I wouldn't be who I am today. They're what will continue the LGBTQ movement, and I can't wait to see it. pic.twitter.com/8HeQ8jCw7S

The Upper West Side museum is expected to open in 2024 and will occupy the expanded building’s fourth floor, encompassing two galleries with access to the roof garden.