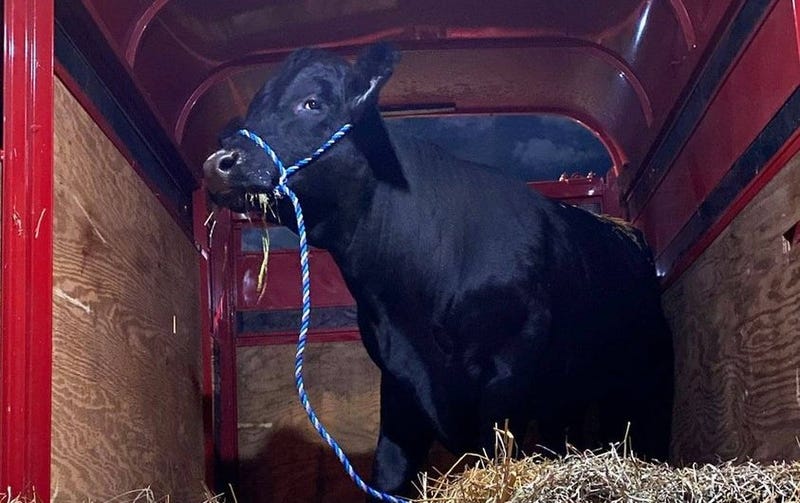 MORICHES, N.Y. (WCBS 880) — A 1,500-pound bull that has been on the run since escaping slaughter in late July was captured in Suffolk County late Wednesday evening.

According to the Suffolk County SPCA, the black bull – who was named Barney by locals – was captured around 11 p.m. by members of the Skylands Animal Sanctuary and Rescue at the former duck farm on Barnes Road in Moriches.

Barney had been on the lam since July 20, when he escaped from the slaughter house at the same farm where he was found.

Look who we found cruising around Long Island. He is one handsome kid ❤️❤️ Eddie, Joe, Karen, Dave, Nick, thank you for...

Posted by Skylands Animal Sanctuary And Rescue on Thursday, September 23, 2021

After escaping, he was seen running through residential neighborhoods throughout Suffolk County, and even shut down part of Sunrise Highway.

Rescue groups and Suffolk County Police worked tirelessly for two months trying to locate Barney, and even brought in a cow, named Norma Jean, in the hopes of catching him.

"I think it was about 40 days of me sitting there basically all day long and all night," said Mike Stura of Skylands. "It really became a part of my life."

Using a special feed capture contraption, when Barney went to eat a mixture of alfalfa and hay, he became trapped and was finally humanely captured.

The Suffolk County SPCA said Thursday that Barney will live out the rest of his life at the Skylands Animal Sanctuary and Rescue – “a 232-acre farm housing many rescued and abused animals” — in Wantage, New Jersey.

The bull will be evaluated by a veterinarian to make sure he is healthy after roaming through Long Island for two months.

"I can't wait until he's able to go in with others of his kind," Stura said. "Some of the pictures that I have of him he just looks so lonely. It's heartbreaking. Now, he'll never have to be lonely again, I love it."