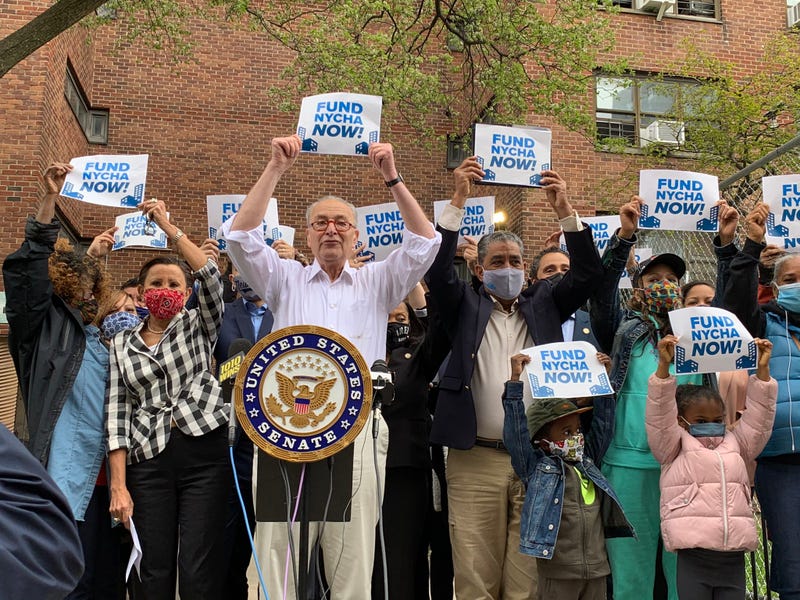 The $40 billion set aside for public housing nationwide is equivalent to the repair backlog in New York alone, Schumer said at the Washington Houses in East Harlem on Sunday.

Schumer is leading a coalition looking for more money to be set aside for public housing in Biden’s American Jobs Plan. The senator wants to at least double the $40 billion figure to $80 billion.

“For too long, public housing has been neglected, left to get worse, and we’re not going to stand for it anymore,” Schumer said.

.@SenSchumer and more from New York’s congressional delegation calling for public housing funding in the infrastructure bill to increase from $40 billion to $80 billion @wcbs880 pic.twitter.com/bbl3Lhldob

The senator said at least half of the $80 billion would come to New York, enough to eliminate the estimated repair backlog for the New York City Housing Authority.

Resident leaders said the beleaguered housing authority has seen chronic mismanagement, all while they deal with lead, mold, leaks, heat and elevator outages. Around 600,000 people are estimated to live in public housing in New York—equivalent to the entire city of Baltimore.

Schumer said he’s determined to pass the bill, despite Republicans coming out against the tax increases needed to pay for it.