NEW YORK (WCBS 880) — We at WCBS 880 and Entercom New York are pleased to partner with the New York Urban League to shine a spotlight on issues of inequity in our community in important areas like health care, education, the digital divide, social justice, the economy, and civic engagement.

Last week, we looked into the racial inequities in health care and education.

As we dig into a comprehensive report released by the New York Urban League titled, "The State of Black New York," we take a deeper dive into the issues of income inequality and race.

The tracker found 59% have lived in poverty for at least one of the past four years and 35% of adult New Yorkers who exit poverty fall back in the following year. 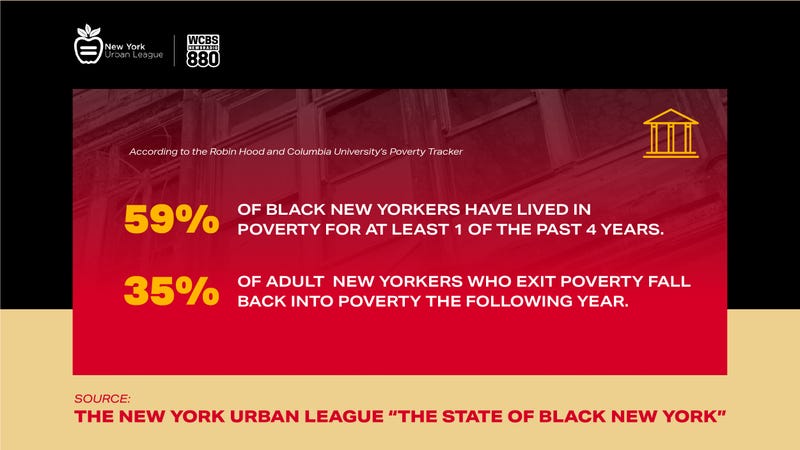 "We have seen an increase of 1020%. Right now we are distributing food to 14,000 families per week, which is beyond the thoughts of what we could ever think," Samuels said. "We're seeing that families are in dire need for food. It has been very, very scary."

Samuels said in the last survey they conducted, 75% of those that have come for food are there because of unemployment.

The New York Urban League found half of the city's job growth since 2010 has been in industries with average annual wages under $40,000.

"Sixty-one percent of those we serve do have a job, but they struggle in order to put food on the table, and for obvious reasons. The rents are very high in New York City," Samuels said.

Before the pandemic, gains were being made in the city's communities of color, said Noreen Springstead, executive director of WhyHunger.

"The hunger numbers were actually moving down, we were making a lot of progress. As soon as the pandemic hit, they skyrocketed. I think most people have seen those long lines of people in need, really human suffering, looking for food to feed themselves and their families. So it's not a new problem, however, it has been exacerbated by the pandemic," Springstead said. "We have skyrocketing hunger. It is the ripple effect and it's going to take a long time to recover from this hunger crisis."

Fifty-four million Americans do not have enough food. The undocumented cannot qualify for SNAP benefits to feed themselves or their children.

"The COVID pandemic has really pulled the covers back on what has been true for a very long time — that communities of color suffer at disproportionate rates of health crises, food crises, housing crises, and what it does is creates an opportunity to begin to address those issues much more holistically," said Sprinstead. 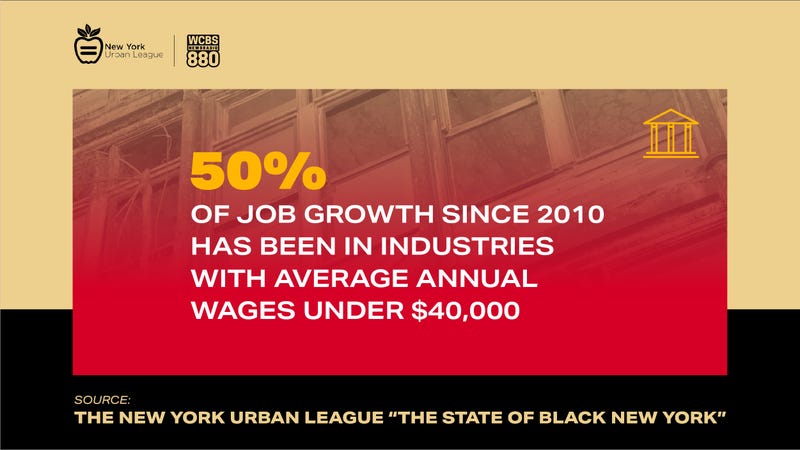 As part of our coverage of this topic, we wanted to engage some of the people running for mayor of New York City to discuss the problems and potential solutions.

Democratic candidate Kathryn Garcia has been in city government for 15 years working in housing, environmental protection and sanitation. Most recently, she worked as the city's food czar during the early days of the pandemic and saw firsthand the need.

"I think that this is really a tragedy to see these types of numbers, but know that there's a human face behind them and a human family, usually with kids. And there's a lot the city can do. Not only does the city need to ensure that we're supporting people through the safety net programs that we have, but also creating real opportunity for people across the city and particularly for Black people and for women who have shouldered the burden so often in this city and we're not creating jobs for them," Garcia said. "That is why I would pair the concept of economic development with workforce development and ensure that those two things go hand in hand."

Garcia said the city must also guarantee that high-paying jobs are available for students coming out of CUNY.

Garcia is also focused on making the city more affordable.

"First and foremost, when we talk about housing we have to make sure that we are renovating all of the NYCHA apartments and making them high quality places for people to live and raise their families," Garcia said. "We also need to continue building and build deeply affordable housing for those who are at the lowest incomes levels, but also just make it easier to build housing. We've been in a scarcity situation since before I was born."

"We know the virus went rampant in overcrowded housing and got many more people sick because they couldn't quarantine from each other, we know that it means that you can be much more successful in school, and we know that it's easier to hold down a job when you have a permanent home," Garcia said.

Meanwhile, just this week, Mayor Bill de Blasio announced plans to help close the wealth gap in New York City with a program to encourage people to shop at and celebrate Black-owned businesses.

There is no question that COVID-19 has wreaked havoc on local businesses, but studies show that Black businesses are twice as likely to shut down during the pandemic.

There are twice as many white entrepreneurs as Black ones in the city, according to the New York Urban League, and the Black-owned businesses that do exist make up just 2% of the total, and even less than 2% of the employees are Black.

The biggest challenge for Blacks in getting their foot in the door is money. Stats show banks won't give it to Black as much as they will to whites.

Dawn Kelly, owner of a popular juice bar in Jamaica, Queens, was well aware of those realities when she lost her job in public relations at Prudential a few years ago. 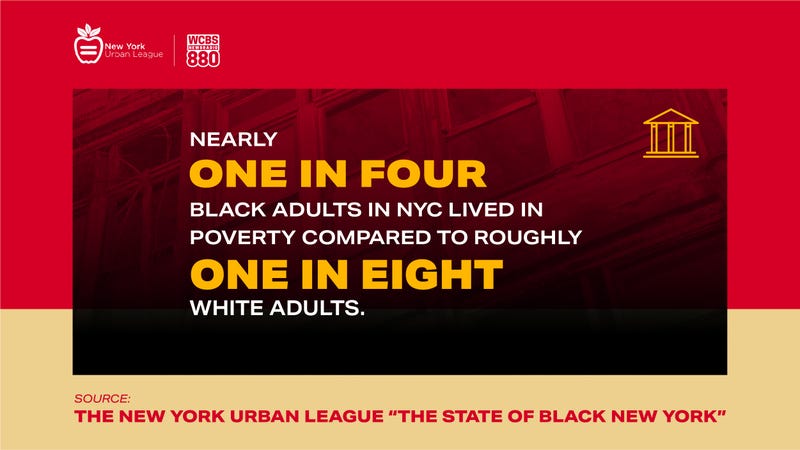 Our Mack Rosenberg asked her whether she thinks she would've been able to start her business if she didn't get a severance package and had to rely on a loan.

"I would tell you that I think it would've been challenging and difficult at best," she said. "The stories are out there. Black people, for the most part, and first time business owners, so I don't want to just say Black people, but Black people more often than not don't get the capital from the banks and lending institutions that they need in order to start a business and to sustain  a business."

Aside from her success since opening The Nourish Spot is her success as a mentor to young Black people looking to become entrepreneurs.

Also in on the mission to expand the Black economy is the city's Small Business Commissioner Jonnel  Doris. He started BE NYC, with “BE” standing for Black Entrepreneurs. With funding from the city and big companies like Ernst & Young and Mastercard.

They operate on what Doris likes to call the three M's — money, mentorship and marketing.

"Help you with access to capital by bringing in new partners like Goldman Sachs and others, making sure that they're connected to other peers that can help them sort of get through the program, and how do we expand and grow to digital storefronts but also enhance your online presence being that we're in the pandemic most of what we're doing online," Doris said.

He calls Kelly a star, in large part because of her mentoring.

Three young Black people have already started their own businesses thanks to her.

"Because I know more, I must do more. There's a famous saying in the Black community, 'To whom much is given, much is required.' And so I see my life, not really differently than others, I just have made different choices than others, and so because I have had the opportunity to do more, see more, experience more, I see it as my role to teach others," Kelly said.

Doris said it's critical for entrepreneurs to help other entrepreneurs like Kelly is doing. But he still sees the financial challenges as a stumbling block.

"These things are critical. What others don't have to think about when they start a business, the businesses that we're talking about here today do," Doris said.

As we round out this week's reporting on the New York Urban League report on the "State of Black New York," we wanted to bring in another candidate for mayor.

His is African American and self-made.

Our Lynda Lopez spoke to him this week about his thoughts about the racial divide in the economy.

He said his plan is to lead the largest most inclusive economic comeback in the history of this city.

"Which is to put people to work, give people jobs, move them from no class to middle class," McGuire said. "My plan is go big, go small, go forward, putting 500,000 New Yorkers to work so that they can earn a wage, earn a living, that takes them from the lower income to the middle income so they can participate in the way that all of us want to participate in this city."

At the center of his plan, is a focus on infrastructure that includes affordable housing.

"It should not be the case that people make $15,000 to $30,000 a year, who are really essential to how this city works, pay 50% to 60% of their income to rent. That's not truly affordable, so we need to make certain that we build truly affordable houses," McGuire said, adding that the digital divide is also an issue he plans to address. "It's had such a negative impact and profound impact on how we educate our kids and what my plan is, my go big plan, is to focus on building broadband so that people have access. We have 1.5 million New Yorkers, people who are lower income, don't have access to broadband or mobile and we need to fix that."

His plan also focuses on small business that he describes as the lifeblood of the communities.

"I have a plan to support the small business with wage concessions, 50% wages, so they can keep their sales tax receipts, so that we cut the bureaucracy and give them relief on many of the fines that have been levied," McGuire said.

His goal is to uplift the city economically and grow out of this crisis. 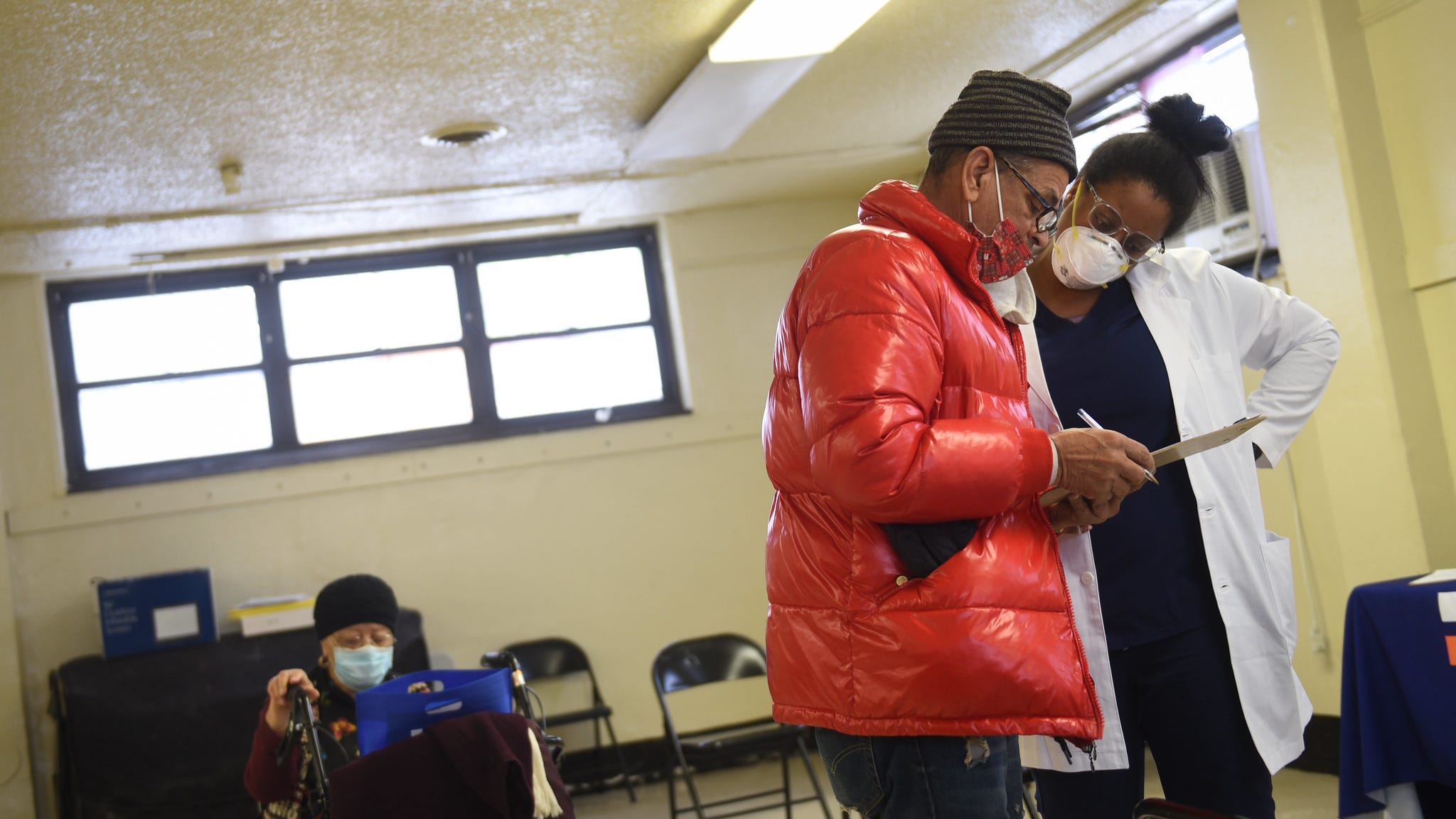 State of Black New York: The racial divide in health care and education