"It puts my mind at ease and makes me feel good about what I can do to help myself and everybody else," said 76-year-old retired teacher Gary Greenberg, who had no trouble making an appointment on the state website. "It was beautiful. It just dropped down Javits and I was able to do quite well the very first day I was eligible."

"But we only get 300, 000 doses each week from the federal government and at that rate it could take up to 6 months to vaccine everyone currently eligible," Zucker said.

The Javits Center will have the ability to vaccinate 25,000 people a day, but on Wednesday they will administer 1,000 doses.

Sites at Jones Beach and SUNY Albany will also open on Thursday and Friday, respectively, Gov. Andrew Cuomo said in a press release. 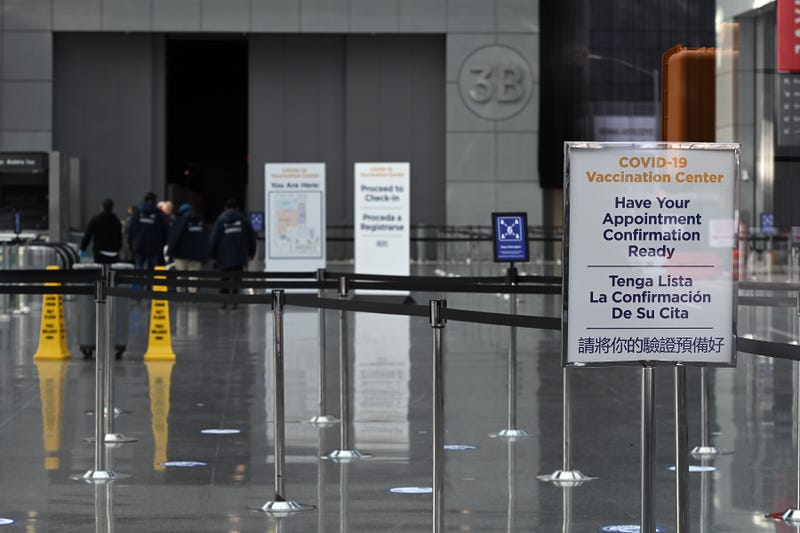 “Since federal supply severely limits the ability to distribute vaccine, New Yorkers are encouraged to remain patient and are advised not to show up at vaccination sites without an appointment,” Cuomo said in a statement.

The governor said the state’s “vast distribution network and large population of eligible individuals far exceed the vaccine supply coming from the federal government.” He said the state is only receiving 300,000 doses each week even as millions are eligible.

“Eligible New Yorkers should be prepared to receive an appointment date as far as 14 weeks or further in the future,” Cuomo said.

New Yorkers can check their eligibility to get vaccinated at the New York Health website.

Check your eligibility and find vaccination locations near you.

I urge patience as unfortunately there are far more eligible NYers than there is vaccine supply from the federal gov.

In addition to the five state-run sites opening this week, there are plans to open 15 more sites “in the coming days.” The new vaccine network will include doctors' offices, federally qualified health centers, county health departments, ambulatory centers and pharmacies. More than 1,200 pharmacies have already committed to participating in the network, with nearly 400 scheduled to come online this week.

Pharmacies will help provide vaccines for New Yorkers 65 years old and up, while hospitals will continue vaccinating Phase 1a healthcare workers, and local health departments and union-organized efforts will serve essential workers in Phase 1b.

Appointments are REQUIRED. Do not show up without one. #VaccinateNY pic.twitter.com/loBx6pgiQJ

On Tuesday, Cuomo expanded the vaccine eligibility requirements in New York to include anyone 65 or over.

People who are age 75 and up and a much longer list of workers, including transit employees, grocery clerks, teachers, police officers, firefighters and others became eligible to get the vaccine Monday.

Cuomo also said Tuesday that he wants to start opening restaurants, theaters and offices by launching rapid testing sites in New York City and eventually other city centers throughout the state.

The governor said he wants to launch hundreds of new rapid testing sites statewide by partnering with the real estate community and working with local governments to reduce bureaucratic hurdles.

New York has a higher per-capita infection rate than 37 other states and reported 210,000 new COVID positive tests over the last 14 days.

New York City is also operating sites in addition to the state. On Tuesday, Mayor Bill de Blasio announced that a 24/7 mega vaccination site was coming to Citi Field. The site will be run by NYC Health + Hospitals and is expected to give out between 5,000 and 7,000 vaccine doses per day.