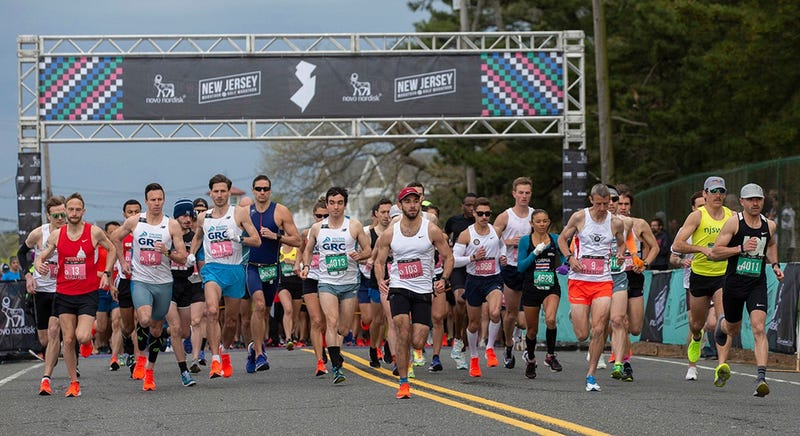 Start of the 2019 Novo Nordisk New Jersey Marathon and Half Marathon which started at Monmouth Park in Oceanport and ended at Ocean Promenade in Long Branch. Photo credit © Peter Ackerman
By The Associated Press

TRENTON, N.J. (AP) — Concerns about COVID-19 have prompted the cancellation of one of New Jersey’s premier road races for the second year in a row.

The New Jersey Marathon and Half Marathon were scheduled to be held in and around Long Branch on Oct. 16 and 17.

In a statement on the event’s website, organizers said the city has decided not to hold large events this fall. The races annually attract thousands of runners to the New Jersey shore.

“With the unknown impact of the COVID-19 Delta variant, and the City’s charge to protect its citizens, Long Branch has made the decision to not allow large events this fall,” organizers wrote. “We appreciate the difficult position that Long Branch is in and their 25 years of support.”

George Jackson, Long Branch’s business administrator, said Monday that while the city has hosted some outdoor gatherings — including a recent charity swim involving hundreds of people — the races posed bigger challenges due to the sheer numbers of people expected and the amount of coordination needed among police and emergency medical services in Long Branch and surrounding towns, all against the backdrop of rising coronavirus infections.

“This race brings in thousands of people, and the finish is on a promenade where it gets pretty crowded,” he said. “We just felt it was too much at this time.”

Runners who had registered for the races can transfer their registration to a marathon and half marathon scheduled to be held in Atlantic City on the same weekend, according to the website.

State officials announced Monday that positive coronavirus cases have risen about 29% in the last week. New Jersey recorded 1,145 new cases of COVID-19 on Monday, up from 884 new cases a week ago. Hospitalizations reached 853, the highest level since May.

Lt. Gov. Sheila Oliver delivered an update on the figures Monday in New Brunswick, where she hosted U.S. Health and Human Services Secretary Xavier Becerra, along with other officials, to discuss reducing drug costs.

Oliver is serving as acting governor, with Gov. Phil Murphy on vacation in Italy and expected to return on Thursday.

Murphy, a Democrat, has said most of those hospitalized with COVID-19 have not been vaccinated.