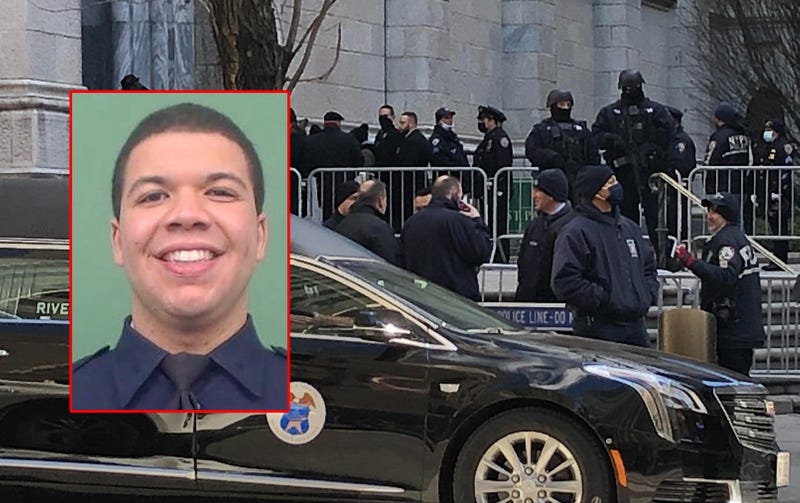 NEW YORK (1010 WINS) — It was a heart-wrenching day for many, as large crowds turned out for the wake for fallen NYPD Officer Jason Rivera on Thursday.

The wake drew hundreds of police officers and New York City residents, who waited outside the church and held a moment of silence as Rivera’s casket was carried inside following a procession from Inwood.

It came hours after an emotional vigil was held from Rivera and his partner, 27-year-old Officer Wilbert Mora, in Harlem. 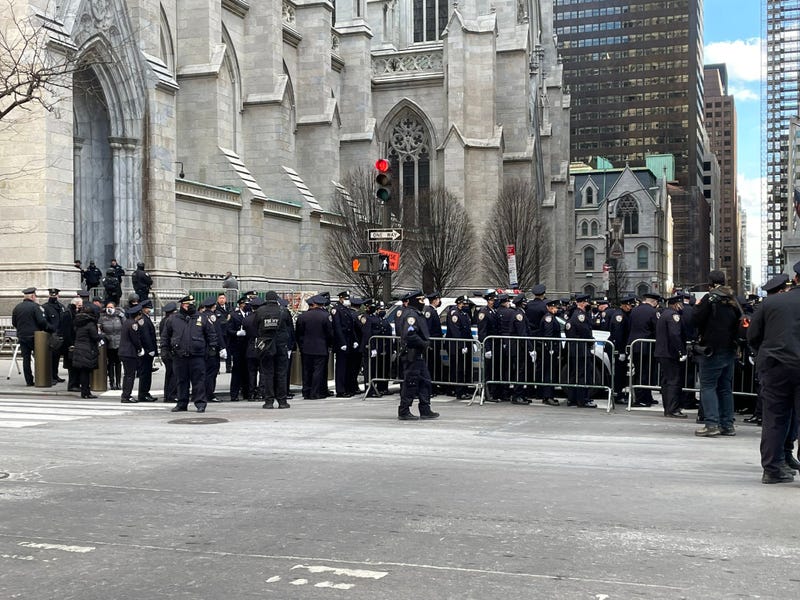 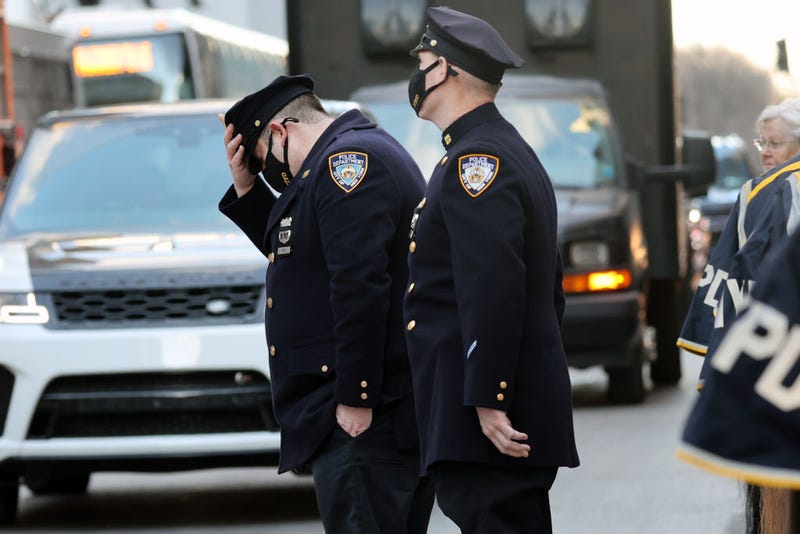 Mayor Eric Adams attended the wake for Rivera around 4 p.m., and a host of other city officials and members of the public continued to stream in throughout the day.

While the mayor did not speak at the wake, during the vigil Wednesday night, he honored the fallen officers and stressed that the NYPD is working every day to end gun violence.

“Violence won’t divide us. It will unite us,” he said. 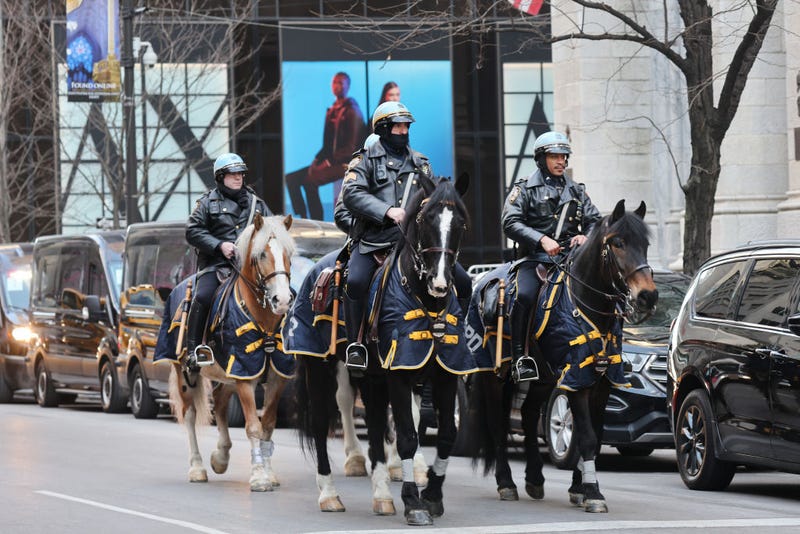 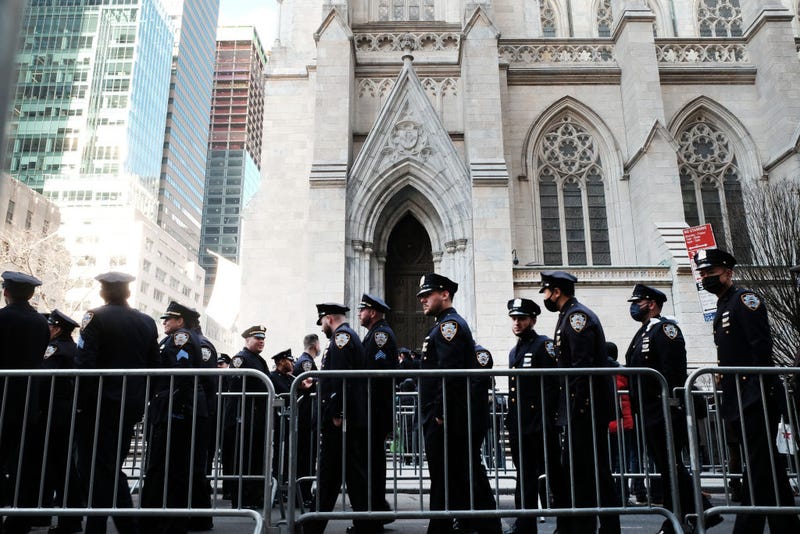 Police officers and members of the public line up to pay their respects to the fallen NYPD Officer Jason Rivera during his wake at St. Patrick's Cathedral on Jan. 27, 2022. Photo credit Spencer Platt/Getty Images

Gov. Kathy Hochul announced that flags across New York State will be flown at half-staff on Friday in honor of Mora and Rivera's funerals.

"The losses of Officer Rivera and Officer Mora are felt widely and deeply by all New Yorkers - my thoughts are with their families and loved ones," Hochul said in a statement.

She added, "Today we mourn as they are laid to rest, but tomorrow we must work to eradicate the epidemic gun violence has become in our communities. We must get to the root of this issue to prevent tragedies like this from happening. New Yorkers deserve elected officials that will work for them to solve this problem and that is exactly what they will get."

Adams and the governor will attend Rivera's funeral on Friday morning.

The NYPD warned commuters Thursday evening that there will be street closures in Midtown beginning at 6 a.m. for the funeral, and drivers should use alternate routes.

ADVISORY: There will be street closures surrounding @StPatsNYC tomorrow, beginning at 6:00 am, for the funeral of Police Officer Jason Rivera. If traveling in Midtown Manhattan, expect delays and use alternate routes when possible. pic.twitter.com/v1GQLfUc6c

The wake and funeral for Officer Mora is scheduled for next week, also at St. Patrick’s Cathedral.

The two officers were fatally injured when responding to a domestic disturbance call at an apartment on West 135th Street, just down the street for the 32nd Precinct stationhouse.

VIDEO. NYPD cops entering St. Patrick’s Cathedral for the wake of murdered Officer Jason Rivera. The 22yr old was gunned down on Friday. Some say they hope Rivera’s death will help bridge the divide between cops and the community. @wcbs880 pic.twitter.com/T82OhkdNw0

Authorities said as they entered the apartment, 47-year-old Lashawn McNeil allegedly ambushed them, shooting at them as they walked down a narrow hallway.

McNeil died from his own injuries at a hospital on Monday, according to police. 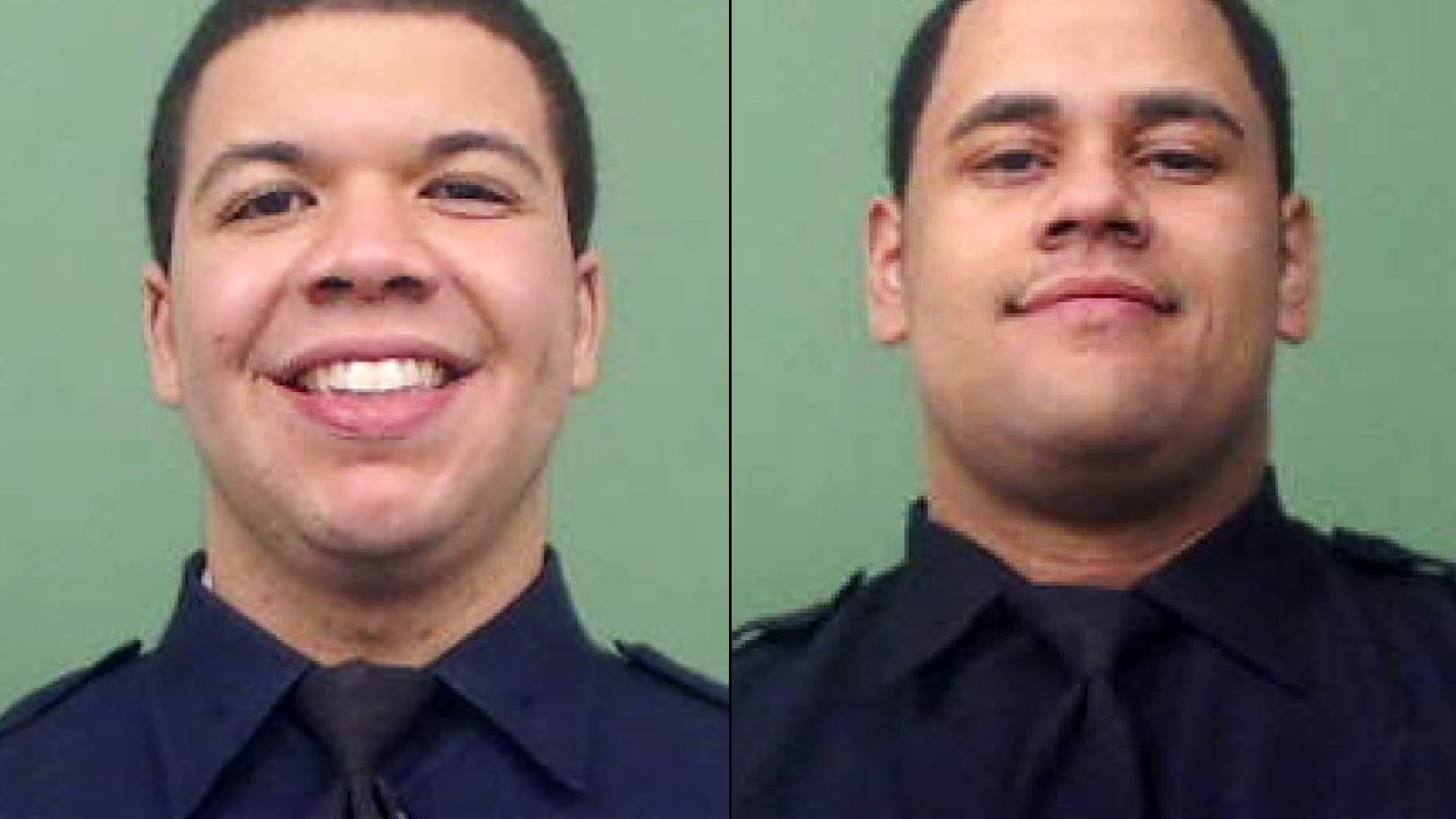 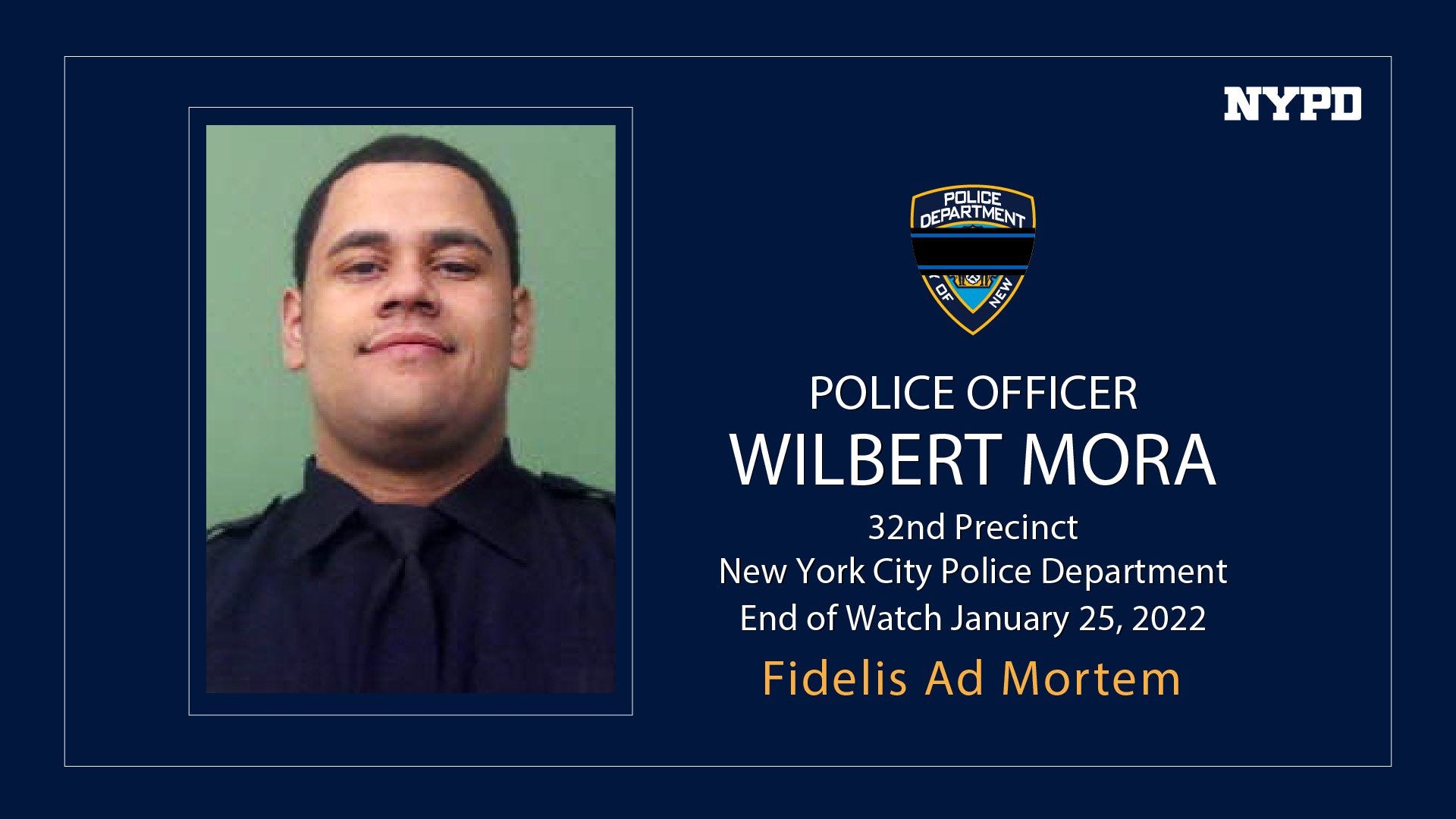 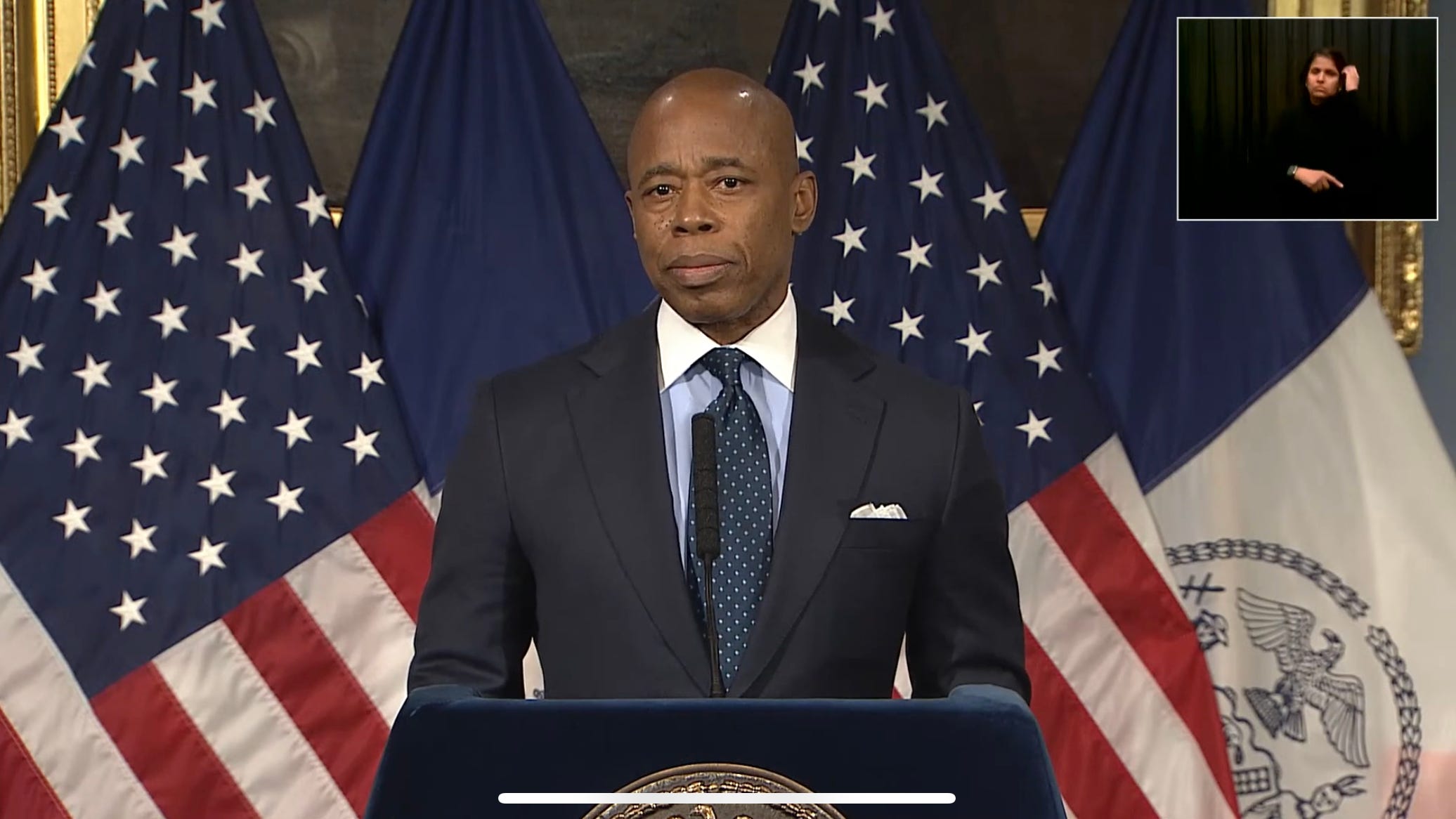