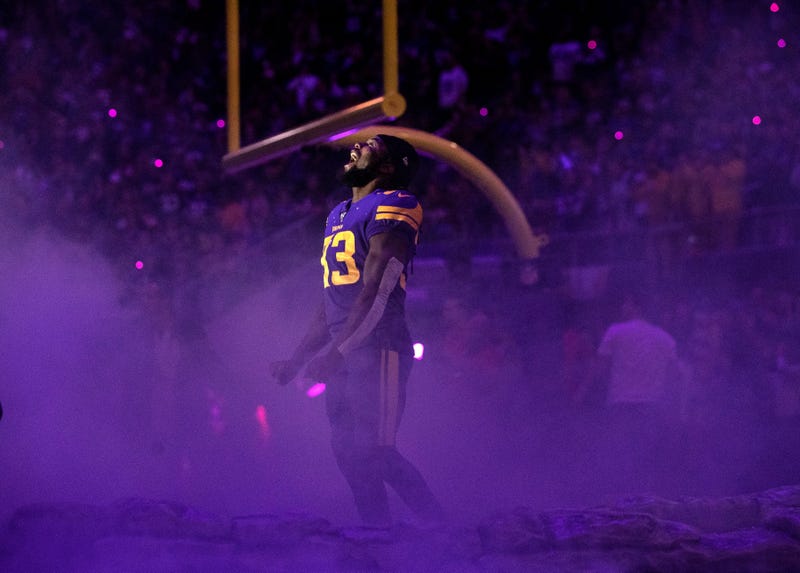 The Vikings are continuing their virtual offseason program with players and coaches participating in videoconference meetings in preparation for a potential return to the team’s facility in the coming weeks. But there reportedly was a prominent absentee in the virtual sessions this week—Pro Bowl running back Dalvin Cook.

As expected, Cook is turning up the heat on Vikings management in contract negotiations towards a possible lucrative extension as he enters the fourth and final year on his rookie contract.

With the Vikings offensive scheme basically unchanged, it’s not a big deal for Cook to miss these voluntary web meetings as long as he’s diligent with his workouts so he keeps himself in shape for when he reports in-person. It will be a problem if Cook and the Vikings can’t come together on a new deal before training camp or early in camp that is expected to begin as scheduled on July 28, pandemic-willing. For the Vikings need Cook in top shape for the regular-season opener against the Packers on September 13 and without an extension in place, Cook reportedly plans to hold out from training camp.

Despite missing 17 games in his first two seasons due to knee and hamstring injuries, Cook wants to use the leverage he has as one of the league’s top dual-threat backs after having his best season last year with 1,654 total yards rushing and receiving and 13 rushing touchdowns. He knows that Coach Mike Zimmer and offensive coordinator Gary Kubiak want the running game to be strong as was the case for their playoff team last season when Cook led the way for the league’s sixth-ranked rushing attack and set up Kirk Cousins to have success in the play-action passing game.

Cook is under contract for $1.331 million in base salary this season and the Vikings don’t have a lot of salary cap room considering they have to sign their 15 draft picks (including two first-rounders). But they can free up cap room as needed through reducing or restructuring other player contracts.

Even with a fine second year back in Alexander Mattison, GM Rick Spielman and Coach Mike Zimmer know that Cook is an elite player when healthy and they like to reward highly productive players who were drafted by the team. They also know of Cook’s injury history and how league-wide there is hesitation on paying big bucks to running backs on their second contracts with due to players such as Todd Gurley who signed a big deal with the Rams two years ago, had knee problems and was released this year with a big dead money hit to the Rams (before he recently signed with Atlanta).

Cook’s camp will say at 25 years old in August, he should have several more years of elite performance. They will point to the league’s top running back contract of Carolina’s Christian McCaffrey who recently signed a four-year extension with $64 million in new money and he also is going into his fourth season (as was Dallas’ Ezekiel Elliott when he held out and then signed a $15 million per year new money extension last year). McCaffrey had two years left on his rookie deal for $11 million total so the actual value of his deal is now $12.5 million per year. Cook’s agent will take the position that his client is a versatile and dynamic player like McCaffrey and should land equal or close to that salary level when factoring in new money plus his existing 2020 salary.

Another pressure point is if he reports late to training camp, Cook will lose an accrued season according to the new CBA which could make him a restricted free agent in 2021 if he doesn’t get extended (rather than unrestricted) and he also risks being hit with substantial fines since he’s under contract.

With all that’s at stake for both sides, I expect the Vikings and Cook to come to an agreement close to the start of training camp so the team has one of its best players under contract for the next several seasons.

With the blessing of the NFL and the state of Minnesota, the Vikings now have approximately 60 employees working at their Eagan headquarters. The Vikings coaches continue to work remotely even though the league is now allowing coaches to work at team facilities if governmental authorities allow it which is the case now for many teams.

Vikings staff members working at the team facility are wearing masks when not in private offices and have their temperatures taken before entering the building.

The NFL also has told all 32 teams that they must hold training camps at their home facilities this summer due to COVID-19 concerns. This won’t affect the Vikings who moved their training camp from Mankato to their Eagan facility when it opened two years ago. But it will impact the eight NFL teams who spent the early portion of training camp on college campuses in 2019.

Around the NFL Observations re: social justice and Vikings owners commitment:

“I personally protest with you and want to be part of the much-needed change in this country. Without black players, there would be no National Football League. We are listening, I am listening, and I will be reaching out to players who have raised their voices and others on how we can improve and go forward for a better and more united NFL family.”

Kendricks said Goodell’s response was “what we wanted”  and said he expects to speak with the commissioner in the next few days.

The players and public will now be watching to see how the league and team owners put Goodell’s positive thoughts into productive action.

The Vikings and the Wilf family have reacted quickly and impressively by announcing on Wednesday a $5 million donation to social justice causes throughout the United States. In a video call with members of the team’s Social Justice Committee earlier this week, Vikings Owner/Chairman Zygi Wilf and Vikings Owner/President Mark Wilf stated the contributions from this fund will be determined in part through collaboration with the players and directed toward organizations fighting hate, racism and inequality.

“We continue to be inspired by these players as they advocate for transformational change in this very challenging moment,” said Mark Wilf. “We are proud of their efforts to use their platform in an effort to end deep-seated social injustices. Their thoughtful approach and our conversations with them have deeply moved us, certainly in large part because of our family’s history and long-standing commitment to human rights, but also because of their steadfast dedication to not sit idly by when they have the ability to make a difference.”

The Vikings also announced the endowed George Floyd Legacy Scholarship, which is being created by the Vikings Social Justice Committee in memory of George Floyd. The $125,000 initial establishing gift will generate approximately $5,000 annually to benefit African American graduating seniors in Minneapolis-St. Paul who are pursuing post-secondary education.

Jeff Diamond was the NFL Executive of the Year in 1998 after the Vikings' 15-1 season. He also is the former president of the Tennessee Titans. He does sports/business consulting, media and speaking work including corporate and college speaking on Negotiation, Management, Leadership and Sports Business--contact him at diamondj4@comcast