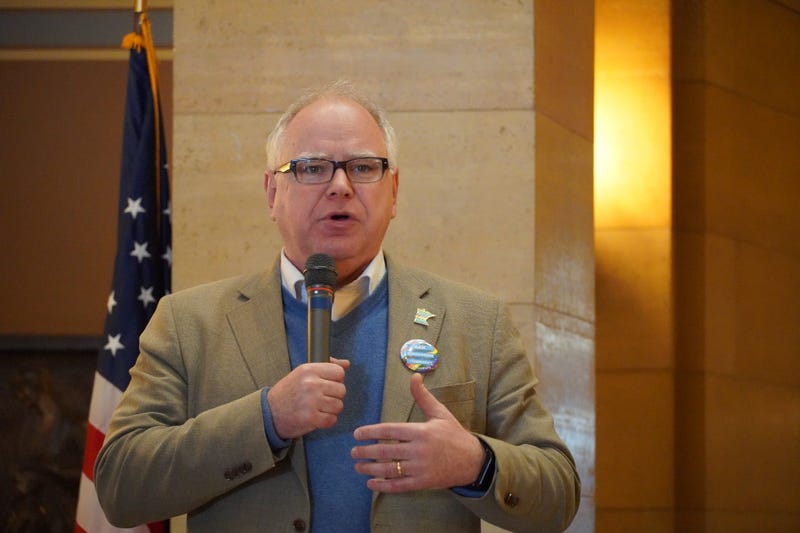 Governor Tim Walz joined the Dave Lee on the WCCO Morning News in a wide-ranging interview Friday as Minnesota continues to take on the coronavirus pandemic, and the aftermath of the George Floyd protests.

Due to continued economic fallout from the coronavirus pandemic, according to a new planning estimate announced Friday by the Minnesota Management and Budget office, the state is predicting a major shortfall of $4.7 billion in their two-year budget cycle. Walz told WCCO will lead to tough decisions.

"I undestand the economic situation of this, Walz says.  "It's blood out of a turnip.  You don't tax businesses who don't have the capacity to pay and are trying to get back on their feet."

Walz said they will have to cut jobs at the state level.

'We've had to start laying off people, we've had to start thinking about in prioritizing services,but still increased quality of life. So I think we can talk about everything, that the idea that you're gonna fix it with a tax increase alone is not going to work. In the idea that you're going to fix it just by cutting, instantly cuts off your growth for the future. We need to be smart. We've got a couple of years to balance this. We've done it before,  You get to the point where you need to shave some things up.  But I'm telling you, get to the point where you're not cutting fat, you're cutting bone and and it's gonna be tough."

Earlier this week a report suggested that Mayor Frey says he hadn't gotten the support from the state level they asked for in containing the protests and riots following the death of George Floyd.

Governor Walz downplayed any issues between the two when asked about the report.

"I just want to be clear," said Walz. "Those days were the hardest days anybody would be up against. And I believe that Mayor Fry was making the best decisions in the best interest of his city as quickly as he could. And I think the same was for us.  It's a difficult situation. It it has nearly never been done. And if you saw, like in Portland, the National Guard was never called out. So it's hard to know.  I just think this thing is it's not a rift. I consider Mayor Fry a good friend. I think in the aftermath of this, we should all take stock. It is kind of armchair quarterbacking, but there's there's value in that. There's things we could have done differently."

Walz also says the city and state responded to the situation as fast as possible.

"When we prepared for big events like the Super Bowl,18 months of planning goes into that," Walz told Dave Lee. "With this we had about eight hours, so I just believe this is this is not a personal rift. As we said, the mayor called for the National Guard as quickly as he could. We responded as quickly as we could, and certainly we're glad there wasn't more loss of life. But this is what happens when society got to the point that George Floyd killing erupted and we have to do better."

The governor was also asked about high school sports in Minnesota following the High School League's decision to move football and volleyball to spring."There was no decision that was going to make everyone happy. But their job wasn't to make them happy it was to keep our kids safe and figure out how to get them playing."

You can listen to Dave Lee's entire interview with Governor Tim Walz here.