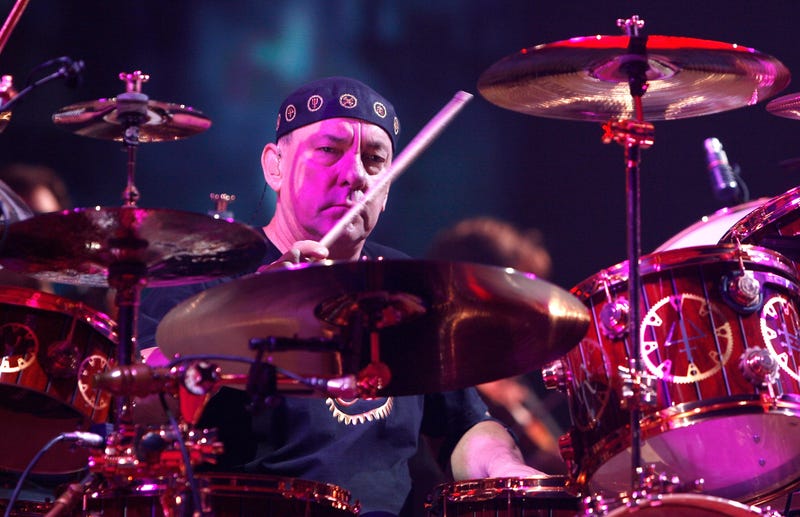 One of the greatest musicians to ever pick up drum sticks, Rush's Neil Peart died Tuesday after suffering from brain cancer.

Peart was not only a terrific drummer, he was the main lyricist for Rush.  The band leaned heavily on Peart's heady writing, which drew upon such diverse sources as Ayn Rand, and science fiction for inspiration.

The band retired from the road after a farewell tour in 2015.  In January of 2018, bandmate Geddy Lee confirmed that Rush had called it quits due to Peart's health issues.  Rush was inducted into the Rock & Roll Hall of Fame in 2013.  Their albums in the late 70's and early 80's, such as Permanent Waves, Moving Pictures, and Signals, made them worldwide stars.

A native of Port Dealhousie, Ontario, Canada, Peart played in regional bands looking for a career as a drummer.  In the summer of 1974, he hooked up with Lee and guitarist Alex Lifeson who had been floundering for 6 years, and a classic rock band was born.

Rush's first album with Peart, Fly By Night, contained the band's first attempts at the progressive rock that would make them famous.  Complex arrangements and multi-section formats matched Peart's ethereal lyrics perfectly.  Peart's drum fills on songs like Tom Sawyer were "pop hooks in their own right" according to his obit in Rolling Stone.