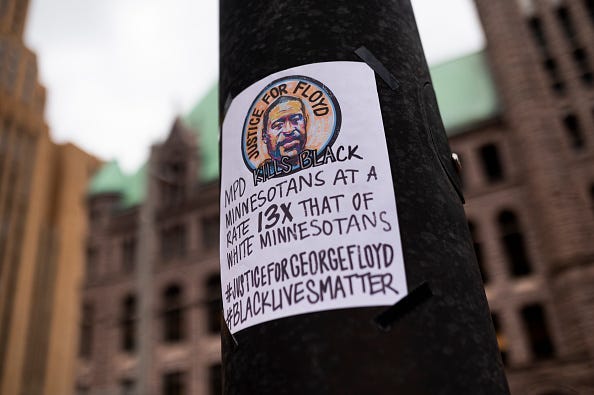 (WCCO) The George Floyd arrest video that set off 1,000 protests tells one story -- that of a man slowly being killed by the weight of Officer Derek Chauvin's knee on his neck as he begged for his life -- while the official autopsy tells another: That of a man with heart disease and intoxicants in his system who died from a combination of those factors.

The Floyd family entered a third into evidence Monday afternoon with their own independent autopsy results.

"He needed a breath of air," prominent civil rights lawyer Benjamin Crump said during the press conference. Their findings found he died of asphyxiation, not only from pressure applied to his neck in the video, but also from officers on his back. Knees on his back compressed his chest, forcing him to be unable to draw breath as another officer knelt on his neck, per the newest findings.

A forensic pathologist from the University of Michigan said the manner of death was homicide.

With that information, the family wants first-degree murder charges against Chauvin, and charges to the fullest possible extent against every other officer on the scene. "They want equal justice for African Americans because black lives matter and George Floyd's life matters," Crump said.

Attorneys said there will be permanent changes to the Minneapolis Police Department because of what happened to end Floyd's life -- a kind of maneuver that never should have been allowed. They'll stop at nothing short of that, Romanucci said.

Still, as painful as the video is to watch, Crump urged the public to keep demonstrations in his memory respectful.

"We still would implore people. .. standing with the family of George Floyd to follow the example of George Floyd," a representative urged, said that during uprisings in Ferguson, Mo., Floyd called for peaceful protests. "Had George been alive today and it was some other person, an unarmed, unthreatening person of color who had been unnecessarily and unjustifiably killed by the police, that George would be right now praying for peace."

Toxicology results can take weeks, so it's unknown what is used as evidence of intoxication in the official autopsy. In the 911 call, the caller describes Floyd as “awfully drunk and he’s not in control of himself.”

The Floyd family's independent autopsy was conducted by Fox News contributor and forensic pathologist Dr. Michael Baden, who has conducted independent reviews in similar cases, including that of Eric Garner, a black man who was placed in a choke hold by New York police.

Baden said the autopsy shows Mr. Floyd had no underlying medical problem that caused or contributed to his death, a direct contrast to the official county autopsy. "He was in good health," Baden said. He explained that pressure on the neck wasn't evident in the first, official autopsy because it can only been seen while pressure is being applied, or in this instance ... when it's on video.

Floyd was a father of six who was arrested for allegedly passing a counterfeit bill. Chauvin, the officer with his knee on his neck, was fired and charged with manslaughter and third-degree murder; Three other officers at the scene were fired, but have not yet been charged.

"Everybody else could see that they were killing him, except for the police -- except did they?" Crump said.