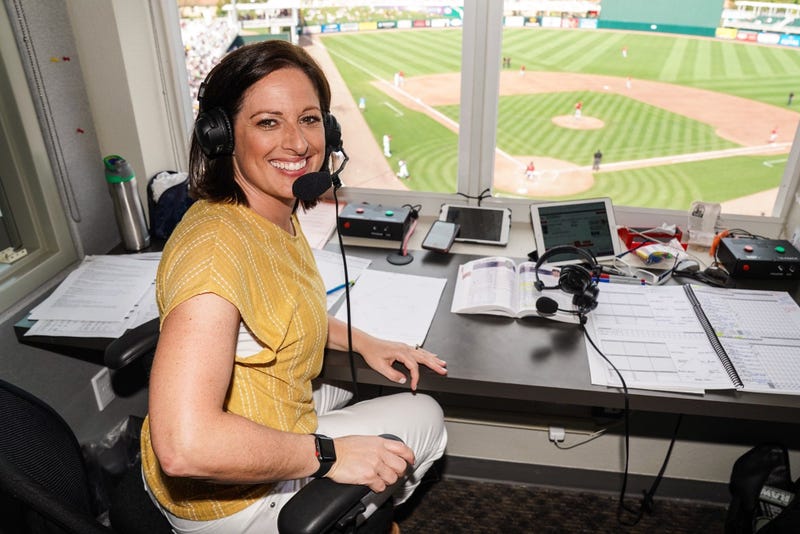 Fox Sports North Broadcaster Marney Gellner made history Friday when she became the first woman to do play-by-play for a Twins game when she called the team’s 4-3 victory over the Boston Red Sox, which we carried live on WCCO Radio.

It was a big moment for her professionally, and one that came with a unique set of challenges. After seeing an outpouring of fan reaction on Twitter, Reddit and elsewhere, we caught up with Gellner after the game to see how she thought it went, her chemistry with analyst and former Twins player Dan Gladden, and how she sees her accomplishment.

Gellner will also do the play-play for Sunday’s game versus the Phillies at 1:05 pm and Monday’s game vs the Baltimore Orioles, also at 1:05 pm.

WCCO Radio: This was a big moment for you. How will you look back on it?

Marney Gellner: I think I will remember this as one of the most memorable personal moments of my career. I grew up as a Twins fan in Minot, North Dakota, and that's a big part of Twins Territory. We as a family, we're Twins fans. I can remember going to my first Twins game in 1988. I would have been 15 years old and I have been a Twins fan basically my entire life. So to be able to actually call a game with a guy, Dan Gladden, that I also grew up watching was just, it was a moment for me. I can remember during the national anthem I was standing up in the broadcast booth and had a million things running through my head and I just kind of looked out and saw the baseball field and palm trees and my headset on my head. And I thought, holy cow, I am about to call a Minnesota Twins game. It was pretty awesome.

WCCO Radio: It seems like it shouldn’t be a big deal that a woman is calling a baseball game in 2019, but it is and people notice it. How do you see it?

So, I feel like you could have a new person, male or female, come in to broadcast the game for your favorite team and some people are going to love him or her and some people are going to hate him or her. And sometimes the only reason the person is not liked is because it's change. I actually had a couple of comments from people on Twitter leading up to this that had already said, 'I won't listen. I don't like it when women call men's sports. Sorry if that makes me a chauvinist, but I'm out." And to each their own.

I do understand that change in itself is difficult for some people. We're in 2019 and it seems pretty natural to have a woman on occasion call a game because I think that there are a lot of females who are as qualified, if not more qualified, than the men who are calling games.

WCCO Radio: Let’s address one thing that’s out there: some fans objecting to the tone of the back and forth between you and analyst Dan Gladden, with some people feeling offended on your behalf. Were you offended? How do you see it?

MG: There was no point today where we fought or where I felt insulted or threatened or anything. I just thought we were having fun. He threw a couple sharp shots at me and I thought I threw a couple of sharps back at him.

He texted me after this game tonight, we were at dinner and he texted me to say that he thought the broadcast went well and that he was proud of me and that he looked forward to doing another game on Sunday, which is exactly what I would expect him to do.

WCCO Radio: Since you know each other, were you glad to have him with you on your first time calling a game?

MG: I am pretty thin skinned so I tend to be a little more affected by negative comments and take things to heart, probably more than I should. But I was overwhelmed by a lot of the positive reaction and a lot of people who just wanted to take a minute to say I listened and I liked it and you were good or it was a fun game today. A little pat on the back. I really, genuinely, honestly appreciate that.

WCCO Radio: OK, back to the game itself — how did you feel going into it?

MG: I felt like I was pretty well prepared. I've been reading the articles and doing my research for the last couple of weeks. So I knew I was prepared. I just have never called a baseball game before, so I didn't have a routine and I didn't really have much of a rhythm. There was really no way to prepare for that.

So I felt comfortable in knowing that I was ready in my knowledge and all the prep work that I had to do. It was more just kind of being anxious to get the game going so I can get a rhythm and get the flow of how the game would go and where I would physically have all my notes and my score sheet and the roster.

MG: Spring Training in particular is challenging because you will hardly ever have a player who starts the game, finish the game. So guys are usually playing four innings, maybe five innings. And then usually the seventh, eighth and ninth innings, every single position is changed out -- like the starting third baseman by the seventh inning for sure is gone, sometimes by the fifth inning. And you might have three different guys who play third base before it's all said and done.

WCCO Radio: And the changes aren’t announced to the press box, right? So you have to eyeball it?

MG: Right, it is not announced to the press box. It is in an actual Major League Baseball regular season game. There is a formality that managers have to go through and then the umpire turns to the press box area and makes the announcement. And there are not very many of those.

But in Spring Training it's pretty constant. So we just use Kyle Hammer, who was the producer of the Twins broadcast, and Dan Gladden, who is the analyst, and between us and some binoculars and some scratch pieces of paper we just eyeball the changes as they come. It's a real fly by the seat of your pants type of thing when you get into those late innings, which makes it even more challenging. You're not just calling the game. You're also trying to stay organized and figure who the people are that are playing the game.

WCCO Radio: You’ve made history. Are you proud of what you accomplished today?

MG: Yeah, I'm absolutely proud. It meant a lot to me professionally, but I didn't make a bigger deal out of it because I honestly don't look at myself as a female broadcaster. I just consider myself a broadcaster. I understand that this was unique because the Twins have never had a woman call the game. From here on out maybe this will just be normal. There will be a broadcasting change. Sometimes it'll be a female, sometimes it won't and it won't be that big of a deal.

I worked with this team in some way shape or form for almost 16 years and I was just so thrilled and honored and grateful that they would trust me with a broadcast. They believe in me and my skill enough to know that I could handle play by play of the game and they've asked me to do three of them. They didn't say here, try it out and we'll see if this might work and if it doesn't work, we're going to pull you off it. They just said, we know you can handle this, here are three. Do you want to do them? So I was thrilled and kind of blown away that this opportunity even came up. It was not on my radar at all, but I was thrilled to have it.

But yeah, I am proud of it. I am proud of this game and this day and it will be something that I never forget. I know it was only a Spring Training game but for me personally it was my first and it was a pretty amazing day.

This Q&A was edited for clarity, concision and readability.