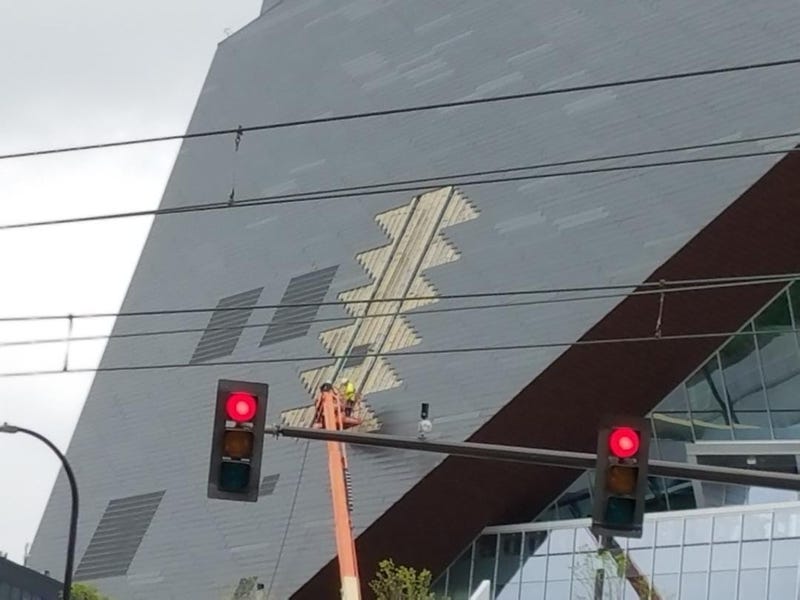 The leaky exterior panels on US Bank Stadium in downtown Minneapolis are more problematic than originally thought.

And they all have to be replaced.

The cost os $21 million dollars, which will not be paid by taxpayers, who footed a large part of the bill for the billion-dollar home of the Vikings.

In a settlement announced on Friday, the repair plan will be split between the building's general contractor Mortenson, and seven others.

Here is the joint statement on the settlement:

We are pleased to announce the Minnesota Sports Facilities Authority (MSFA), eight companies associated with the design, engineering and construction of U.S. Bank Stadium, and their associated insurance companies recently reached a mediated agreement to collaboratively resolve issues regarding the Stadium, which was completed in 2016. These companies include M.A. Mortenson Company; M.G. McGrath, Inc; Custom Drywall, Inc.; TRI-Construction, Larson Engineering, Inc.; Thornton Tomasetti, Inc.; HKS, Inc.; and Studio Five Architects, Inc. Participants agreed that a mutually determined solution was the best approach to this matter given its scope and complexity. Reaching an agreement took time, but all parties were committed to the process and achieving a fair and appropriate outcome.
The MSFA and the companies associated with the design, engineering, and construction all have exceptionally high expectations for this facility. The remaining issues and claims were tied primarily to the stadium’s exterior enclosure, which experienced some wind damage and water issues following the construction of the building. While those individual issues were identified and fixed, all parties want to ensure the building performs as intended, both inside and out, for its entire lifetime.
At the core of the agreement, U.S. Bank Stadium will receive a completely new, enhanced exterior enclosure. The design and construction team’s responsibility was to deliver a building that would pass the test of time and there was sufficient evidence to be concerned that the system as designed and built may not. As stewards of the public’s investment in this stadium, the MSFA also questioned whether the original enclosure system would perform its necessary function over the life of the building. All parties agreed it was in the MSFA’s best interest to replace the original exterior enclosure with a superior system to what is currently in place.
The new, enhanced exterior enclosure will be designed, engineered and constructed differently than the original enclosure, and it will provide water barrier redundancies not included in the original design. It will have a similar appearance, which is an important design element, but there may be some minor visible variations. Stadium architect HKS will oversee the design work. Simpson, Gumpertz & Heger will conduct the engineering. As the construction manager for the Stadium project, Mortenson will manage the construction effort and M.G. McGrath will perform the new construction work.
The cost of the new enclosure system will be paid for through a general account established as part of the mediated agreement, which will be funded by the eight companies associated with the design, engineering and construction of U.S. Bank Stadium, and their associated insurance companies. No additional public dollars will be required beyond those planned and reserved for the original construction of the stadium.
Construction will be completed over the next two years. The work will be planned in careful coordination with stadium events. We want to again recognize the commitment of everyone involved, and we believe this mutually agreed solution is the fair and responsible approach. All parties are pleased to reach a final agreement.

Mortenson Senior Vice President John Wood, who oversaw the stadium's construction, was quoted saying they're embarassed by the fact the building has had these issues.

He says the company can do the right thing and fix it.