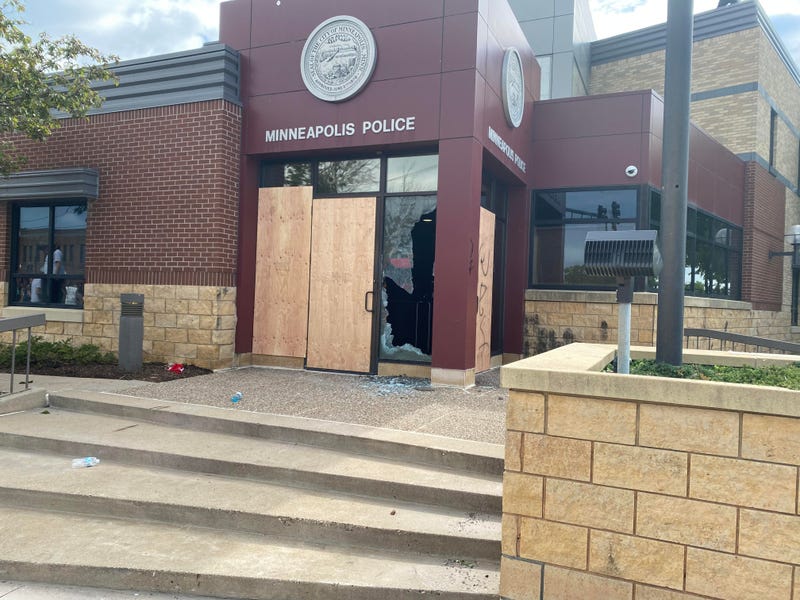 The second day of protests calling for justice for George Floyd devolved after hours of peaceful protest outside the MPD 3rd precinct.

At one point in the afternoon community activists from MAD DADs took the mic to plead for peace and respectful protests.

"You gotta be willing to work through the process," Pastor Brian Herron told an attentive audience. "Don't you know the system process is denied to make you quit, to make you feel in despair so that you quit and you turn on each other and you devour each other while they continue to do what they do."

Interesting dynamic and growing crowd with Mad Dads van and mic advocating for peaceful protest.“I understand emotions are running high” but we’re “tearing up” our own community. “We got to be a little bit smarter than that and be an example.” pic.twitter.com/Q9nxA0YQnY

Around 5:30, the demeanor changed:

And it escalated throughout the night:

Officers on the roof of the precinct have been firing flash grenades and other projectiles into crowd. pic.twitter.com/riE0dPbuWB

The inside of the Target is smoky; people are trying to break into the cash registers. Alarm is blaring pic.twitter.com/qfd97sfNTr

A fire was started at AutoZone. Some protesters attempted to extinguish it some posed for photos. pic.twitter.com/1EGwTPrUTq

That’s why I’m pushing for a full, fair, and expeditious investigation that will bring us closer to justice. We must continue to examine and address the systemic inequities and discrimination that led to this incident and far too many that have come before.

U of M president Joan Gabel announced the university was cutting some ties with MPD:

St. Paul Police Chief Todd Axtell asked his officers to reflect on the video of Geogre Floyd writing that if officers said they wouldn't have done something differently, "I told them to reconsider their career choice."