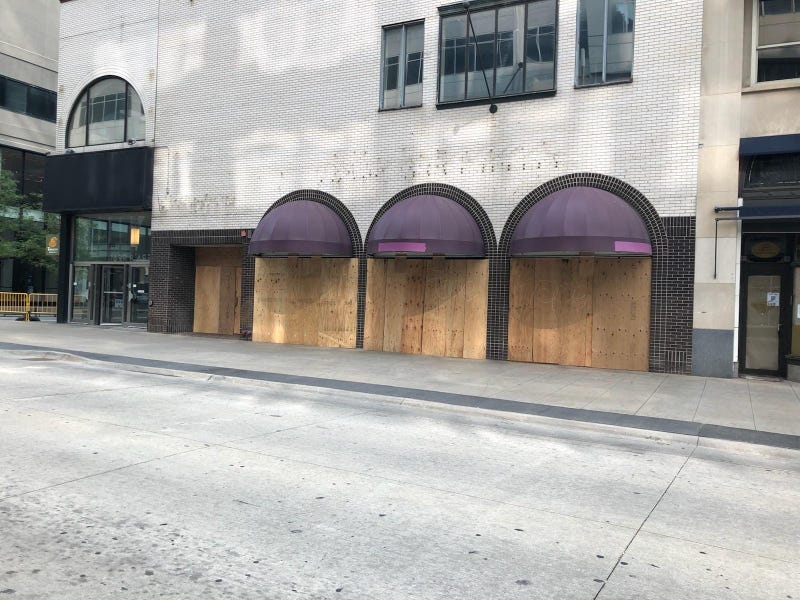 All this week, we are looking at the effects of the pandemic on the Twin Cities.

WCCO's Susie Jones has more on how retailers are doing, with fewer people working downtown, and the unrest that followed the killing of George Floyd.

Remember when downtown Minneapolis was filled with department stores like Donaldson's, Powers, J.C Penny, and of course, Dayton's?  All of them gone now and not likely to ever return in their old form.

Today, many of the windows are boarded up after the social unrest that followed the killing of George Floyd, and the recent chaos that was sparked by miscommunication involving a murder suspect.

Much of the decline of retail downtown has been in play for some time however.  Malls have driven the old-time department stores out of city centers.  Online purchasing, especially through Amazon, has increased dramatically.

Still in the middle of this time of uncertainty regarding the COVID pandemic, there are signs of hope in the retail world though."You can see here that these panels are designed to be completely collaborative, but if a threat level exists you can move them," says Brian Whiting, CEO of the Telos Group, the company leasing and marketing the project.

"We're in lease with about 100,000 square feet, we were in process with a couple hundred thousand square feet of tenancy in January," Whiting told Susie Jones.  "And we had hoped that by March we would be announcing.  But then when COVID came the entire commercial real estate world went on hold.  There's maybe some life to it, a little bit.  People are still talking to us.  Most of the tenants we were in lease with we're still talking to.  We expect to be able to open that up to more discussions once we get to what I call COVID clarity.  COVID clarity for us means when corporations are feeling comfortable to make a decicion on when they're back to work, and what their workspace will look like after the fact."

Economic experts say larger retail companies are likely to survive including stores like Saks Off 5th, Target, and Norstrom Rack still located in downtown Minneapolis.  They do say some of the smaller ones may not survive this.

"The challenge retail faces is different based on who their basic customer is," says George John, marketing professor at the University of Minnesota's Carlson School of Management.  "If you're selling sneakers, you know, business will snap back.  But if you're selling men's clothing that's intended for the baby boomer crowd, it's a much tougher thing."

John says it's hard to say to what extent people will be coming back to shop.