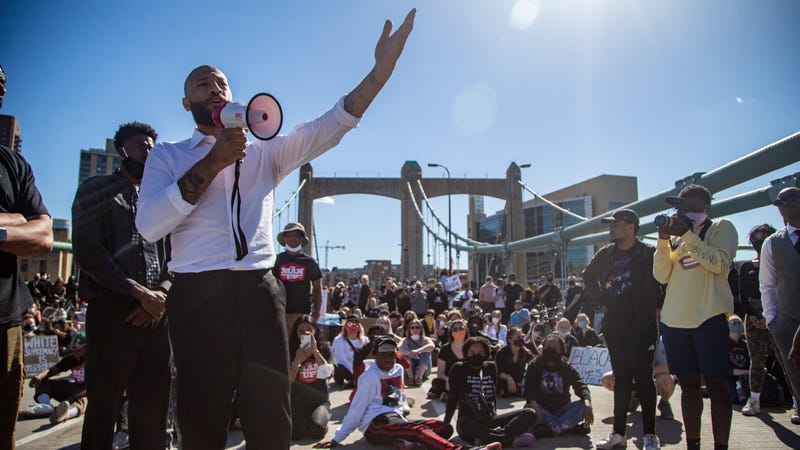 Since the May 25th death of George Floyd at the hands of Minneapolis police officers, former NBA player turned MMA fighter Royce White has led thousands in peaceful protests with 10K Foundation.

Now, White plans to begin the longest walk of his life, one that will take him from 1,000 miles from the site of George Floyd's death at 38th and Chicago to the gates of the White House in Washington D.C.

"I spent a lot of time at the epicenter of this George Floyd movement, or in response to the George Floyd murder. I think it's time for us to up the ante of self-sacrifice and raise the bar for people who are trying to engage in social change in a way that really means to give something in order to see that through," White told WCCO Radio's Dave Lee during the Morning News on Thursday.

I will be walking from 38th and Chicago to the White House. President Trump here we come. Status Quo... Challenged. #LEAD https://t.co/1KHCDeWlqH

With him, White plans to carry a message that includes "a Declaration of Sovereignty and a Reparations Act." Over the projected span of 25 days, White will cross battleground areas ahead of November's election including Madison, Chicago, Gary, Akron, Pittsburgh.

Related: Business is booming at Black-owned Chx for longtime friends who took a risk

According to White, he hopes to meet with President Donald Trump when the walk ends in front of the White House.  In the meeting, he wants to discuss a new social contract between the Free People and The State, which will include reshaping the economic infrastructure of Black America.

White, who's also been out in front of mental health conversations, organized peaceful protests just days after Floyd's killing when riots and looting rocked the Twin Cities.

"I was in front of the third police precinct when the conflict started between the civilians and the cops in that area. It was a sight most people have never seen especially up close and in person," he said. "It just dawned on me that night that it was time for myself and some others to go to the front lines to change the narrative and bring a message of needing to change the dynamic between the people and the state and the monopoly on violence that the state has."

The first 10K Foundation march on May 29 drew 8,000 people to downtown Minneapolis. In the two weeks following George Floyd's death over 50,000 people marched along with ith White and 10K Foundation.