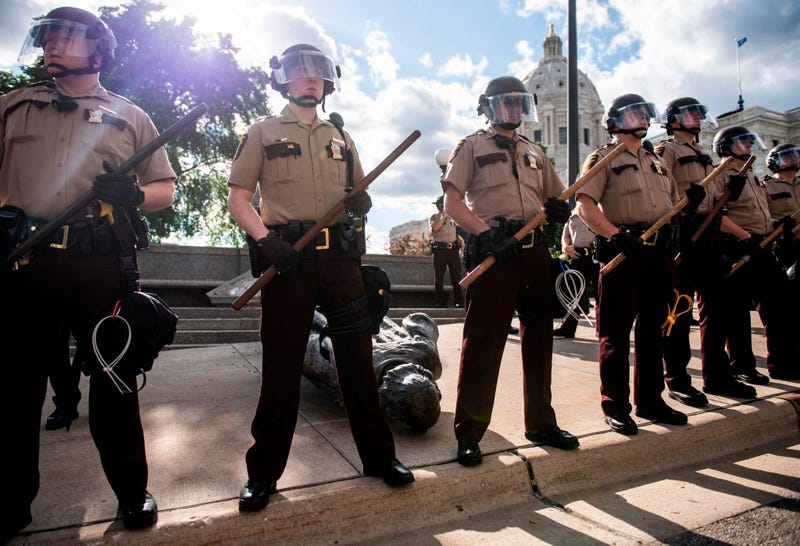 Just an hour after Minnesota Department of Public Safety Commissioner John Harrington said officials would talk to a group who was planning to tear down the Christopher Columbus statue at the Capitol in St. Paul, the statue came flying down to loud gasps and cheers.

Members of the American Indian Movement are preparing to tear down the statue of Christopher Columbus at the Minnesota State capitol pic.twitter.com/8vLdELlxqG

Christopher Columbus, the man credited with colonizing America, and his statues have become a symbol of racial divide due to his ties to slavery in early America. Protesters have taken statues depicting him down in other cities such as Boston and Richmond.

Governor Walz addressed the statue before it was torn down today saying that the symbolism is very important. He added that this shouldn't be seen as division but as continued conversations that are needed to be had.

"I hear it get pushed off as frivolous or political correctness. These are historical pains that led to what we saw happen with George Floyd and the anger that came out."

Thursday morning, WCCO's Dave Lee spoke to Mike Forcia, a member of the Bad River Band of Lake Superior Chippewa, who organized the protest and who called the statue a symbol of genocide. Protesters also called for justice for George Floyd.

Forcia did say that they've been working for years to remove the Columbus statue from the Capitol grounds.

"About two years ago, we were there, maybe three," said Forcia. "And they said that the Capitol grounds has their own department and they're the ones who decide on statues in the monument. So we started that process just like it was done before. Yesterday when the State Patrol came out and he had his, you know, a handful of paperwork that starts the process. We told him when we left yesterday, it was gonna be coming down, and we were willing to be arrested for it. And he promised he wouldn't arrest us, and he didn't. It was very, very peaceful.

"The process took 20 years," added Forcia. "I spoke with the governor and the lieutenant governor a couple of months ago about this. I agreed to wait. Wait for the process that we were gonna have it done, you know, through the proper channels. And we're gonna have a big celebration and a big pow-wow on the Capitol grounds. But the process too long."

Officers did gather at the scene, but not until the statue came down.  Forcia and other protestors were not arrested.  Forcia did say he turned himself over to the BCA.  He has not been arrested or charged at this time.

Lt. Governor Peggy Flanagan, a member of the White Earth Band of Ojibwe, tweeted on Wednesday night about the statue coming down saying, "Our state is long overdue for a hard look at the symbols, statues, and icons that were created without the input of many of our communities."

All Minnesotans should feel welcome at the Minnesota State Capitol, and our state is long overdue for a hard look at the symbols, statues, and icons that were created without the input of many of our communities. pic.twitter.com/O7SP2jSAkm

Governor Walz has released a statement saying that protesters should have followed a formal process to have the statue removed. “While that process was too long for those who were pained by the statue’s presence, that is not an excuse for them to take matters into their own hands ... . Even in pain, we must work together to make change, lawfully,” Walz said.

Forcia hopes the statue coming down allows Minnesotans to have more conversations about the history of the native community.

"I hope we will learn come to terms with the foundation that Minnesota is built on the looting, the stealing of the land, the genocide, the the court of 38 being hung in Mankato, Minnesota. You know, Alexander Ramsey and Sibley and the whole beginning of Minnesota and the country. You know, the country's foundation is built on greed, corruption, genocide and slavery. When you have a foundation built like that is going to crumble and we see it crumbling before our eyes."

Senate Majority Leader Paul Gazelka released a statement on Thursday about the statue falling down.

"Yesterday, the Governor failed the state of Minnesota, again. They knew there was a threat to the Christopher Columbus statue, and he failed to adequately protect it. The mob mentality to do whatever people want without repercussion has got to stop. The Governor didn’t protect the Third Precinct, he didn’t protect businesses on Lake Street, and the Lieutenant Governor condoned the destruction on public property."