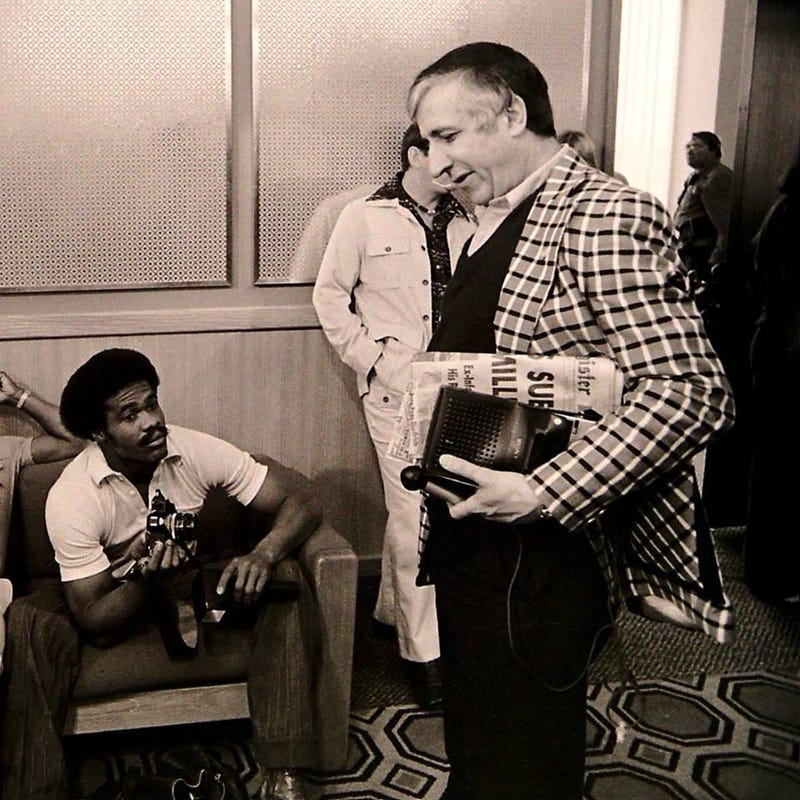 September 1st, 1955.  The average cost of a new house was $10,950.  You got gas for 23 cents a gallon.  That new technology that was all the rage?  Black and white Television.  A new TV would set you back a shocking  $100.  McDonald's fast food chain was started by Ray Kroc.  Escalation in Vietnam was still a decade away, WWII hero Dwight D. Eisenhower was the President while John F. Kennedy was a young Senator from Massachusetts.  Orville Freeman had taken over that January as Governor of Minnesota.

Meanwhile, a 35-year-old newspaper reporter from North Minneapolis was talked into doing some sports reports by the General Manager of WCCO, Larry Haeg.  While writing daily for the newspaper and also acting as the General Manager the Minneapolis Lakers.  Behind the scenes, he was busy trying to lure the Washington Senators to the Twin Cities and bring an NFL expansion franchise to town too. Clearly this was a man who liked to stay busy.

Sid has written books about his life growing up poor in north Minneapolis.  Dropping out of school, selling newspapers in Minneapolis to help put food on the table as a kid, the run-ins with the local 'gangsters', etc.  Certainly the stuff of legend.  Sid is a walking history of Minneapolis and the Twin Cities.

RELATED:  Sid Hartman OK after being stuck in an elevator.

Frequently, he'll stop into my office where I have a framed copy of a Life Magazine from 1961 that had Roger Maris and Mickey Mantle on the cover.  He tells me a story every time about how he used to call the Yankee hotel during the run to 60 home runs that season.  Each time he'd call, he would be told "they are not talking to anyone today".  Which would be followed by "tell them Sid Hartman is calling".  Suddenly, the call would go through and they'd go on the radio.  Close, personal friends.

How about Prince?  Yes, the legend goes beyond sports.  In 2007 when Prince was getting ready to perform at Halftime of the Super Bowl, Sid decided he wanted to meet "that Prince guy".  Well, Prince isn't seeing anyone right now.  "Tell him it's Sid Hartman".  Suddenly, the door opened and Prince says "hi Sid, nice to finally meet you".

There's also the story of Sid getting the only interview with Joe Namath following his "guaranteed" win in Super Bowl III.  The story goes, "if you want to talk to me Sid, follow me into the shower".  So, Sid followed him into the shower and got his scoop.

In the short period of 20 years that I've known Sid, the one thread that goes across all the stories for me is perserverance.  He never gives up.  He is always trying to win.  That singular mind is what keeps someone who is now 99 years old going.  He never forgets each month to ask me for his ratings on Sunday morning.  He still wants to win.

On Sid's 99th birthday, let's all wish this man the best.  He's been a part of all of our lives in some way or another.  It's a wonder he is still in the paper each week, and on the radio.  Even national writers like Peter King of NBC Sports points out the miracle that is Sid Hartman.  As King notes in his weekly NFL column this past Monday:

"Hartman was of voting age, 21, when the Japanese bombed Pearl Harbor in 1941. Hartman was 41 when the Vikings played their first game in 1961. He has covered the team for all 58 of its seasons. When the NFL played its first game, in September 1920, Hartman was six months old. It’s all pretty amazing to me," said King.