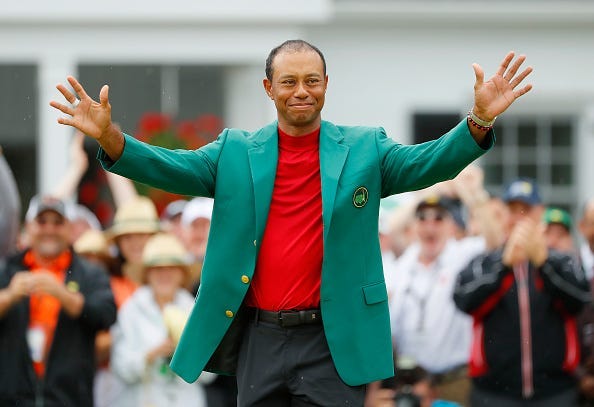 Fresh off his exhilarating win at the Masters over the weekend, Minnesotan's are hoping Tiger Woods may make an appearance at the inaugural 3M Open at TPC Blaine this July.

Tournament Director Hollis Cavner joined the Morning News with Dave Lee Monday morning from Augusta, Georgia and the Masters.  Cavner has been busy recruiting players to commit to the 3M, Minnesota's first regular PGA Tour stop in five decades.  "We had talks with him already, and he likes to play two weeks before a major.  Go back and look at his record.  Two weeks before every major, he plays", Cavner told Dave Lee.  "Tiger's people said the same thing, if he plays anywhere he'll play us, not anywhere else.  Let me tell you, these guys are very regimented in their schedules and how they prep."

The 3M Open is scheduled for July 4th-7th, two weeks before players head to Northern Ireland for the Open Championship at Royal Portrush.

Tiger has twice played in tournaments in Minnesota in 2002 and 2009, both PGA Championships at Hazeltine.  In both tournaments Tiger finished runner-up (to Rich Beem and Y.E. Yang respectively).

For two decades, Cavner and the 3M Championship welcomed the best Senior Tour (later the Champions Tour) players to Blaine.  This new version of the 3M with regular tour players is Minnesota's first regular stop since 1969 when the Minnesota Golf Classic was played at Braemar in Edina.  It was also at Hazeltine for one year (1967) and most frequently played at Keller Golf Course in St. Paul.  It was dubbed the St. Paul Open from 1930-1956 before being renamed the Minnesota Golf Classic.

Cavner is also hoping to create much more than a golf tournament when the 3M is here in July.  The lineup includes mthe Zac Brown Band on July 5th followed by what the tournmant is calling "an epic fireworks show".  Cavner told Dave Lee, "This is going to be the biggest party of the summer.  We are going to have some serious fun.  This will be the best thing to happen in the summer."