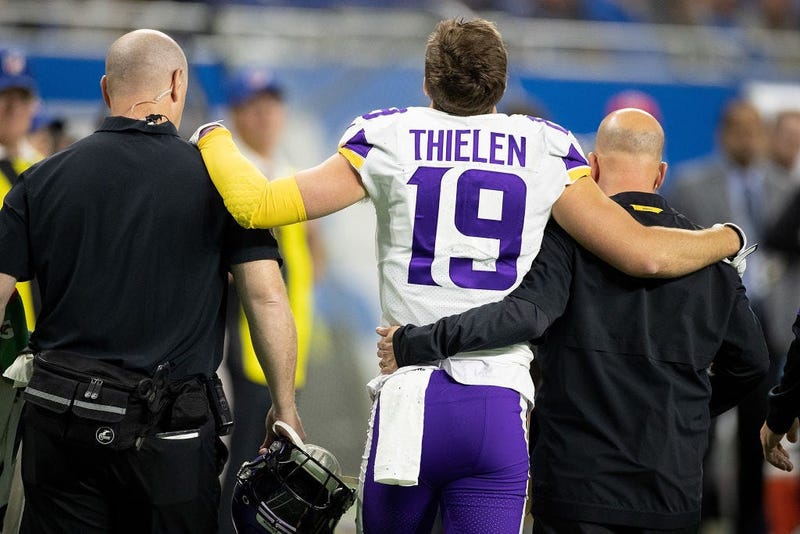 This story was updated on 10/23 at 1:15 pm after the Minnesota Vikings released an updated injury report
Adam Thielen hadn’t missed a game in his NFL career. Thanks to a hamstring injury - and with the Minnesota Vikings scheduled to play on Thursday night -   his impressive 87 game streak has officially come to an end.

Thielen was optimistic about his chances of playing when he joined News Talk 830 WCCO’s Dave Lee in the morning.

“The good thing is still have another day, a full day, to recover so we’ll see.”

The team didn’t have practice on Wednesday, just a normal pre-game walk through but when the official injury report was released on Wednesday afternoon Thielen was listed as OUT for Thursday's game.

“I have a lot of trust in this training staff and this organization,” he said when asked about the final decision on whether or not to play. “I am not sure exactly who makes the call, but I trust them to make the right one for this team and for me.

“There’s nothing I can do but try to do everything I can to play and leave it up to them.”

Although you know the former undrafted free agent turned all-pro didn't go down without a fight.

“A lot of lobbying. I think they’re sick of me by now. I’m trying to relax today on that because I am probably pushing them too hard.”

Through seven games this year Thielen has six touchdowns on 27 receptions.