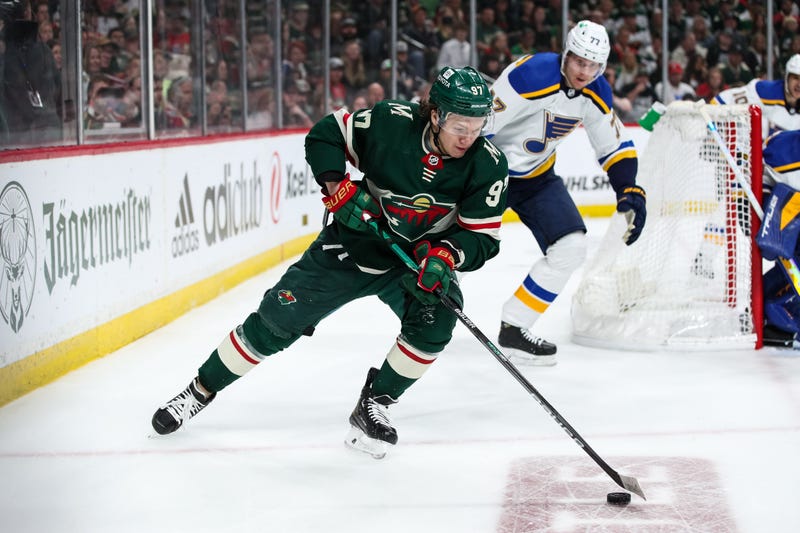 He’s trying. In fact, Kirill Kaprizov is doing everything for the Minnesota Wild. But hockey is not a sport like basketball where a team can just ride on the back of a LeBron James to a championship. Kaprizov has scored seven goals in a playoff series, the most of any player in franchise history. And yet, the Wild need to squeeze more out of their superstar to stave off elimination in St. Louis for Game 6.

The Wild eventually succumbed to two early third-period goals by Vladimir Tarasenko to fall 5-2 on home ice in Game 5. But before that, it was Kaprizov who nearly willed the Wild single-handedly. He was absolutely dominant throughout the game. The Wild’s Russian finished with five shots, and two power-play goals. The first goal tied the game at one, and the second gave the Wild a 2-1 lead after the first period.

kaprizov has eyes in the back of his head, I wont hear otherwise pic.twitter.com/rPTndVc8Wr

Kaprizov did more than fill the stat sheet. He made dazzling plays all over the ice. He fought off Ivan Barbashev in the corner to make a slick pass for a one-timer by Mats Zuccarello. Kaprizov was sprung for two partial breaks by utilizing his skating. And he skated some more, in his patented clockwise pattern trying to find open teammates and open nets to keep the scoring going.

Schenn really tried to do something to Kaprizov here pic.twitter.com/OWyuF7jnCn

But that’s where the problem lies. Somebody other than Kaprizov needs to step up and make a play. While 97 is picking himself back up after Brayden Schenn launches right into the nameplate on the back of his jersey, Ryan Hartman misses his shot over the net. As Kaprizov is dealing with a stick right in his mug, Alex Goligoski’s geometry on his bank passes continues to miss the mark.

Sure, Marcus Foligno upped the ante with the physicality and the line that has become the identity of the Wild looked like they were back after taking Game 4 off. At least for the first two periods. The physicality was great, and a good thing to re-establish. Yet, the line couldn’t get clean looks at the net like they had been earlier in the series. It’s time to make a play.

Where is the line of Frederick Gaudreau, Kevin Fiala, and Matt Boldy? They haven’t been able to find any room on the ice. But more than that, the few opportunities they do get, Fiala is fanning on open looks, or Boldy can’t get to the open rebound before it’s swept away by the Blues defenseman.

What about special teams? Why hasn’t Dean Evason found the right combination yet? The Blues have scored a power-play goal in every game this series. St. Louis keeps getting extra chances because of failed clearing attempts at the blue line. It led directly to Ryan O’Reilly’s first-period tally, and it forced the Wild to chase the game right off the hop. To have a penalty kill, or a power play that’s been bad for 87 games now is inexcusable.

The Wild need players to step up and make a play. They’ve gone into the last two games like they have the best player on the ice and they know that he’ll do something magical. He’s been incredible and worth every penny to this point. But Minnesota needs more from the rest of the squad and the coaching staff.

Dropping Game 5 at home only magnifies the missed opportunity that was Game 4. Letting the Blues get back into the series and feeling good about their own game can only make for an uphill battle in Game 6. The Wild are a team that prides itself on having depth to go with the superstar player. That depth has been missing since Game 3 and must show up in a big way now. Time for Minnesota to prove that they’re a special group. Kaprizov is doing his part. Will anyone else step up?