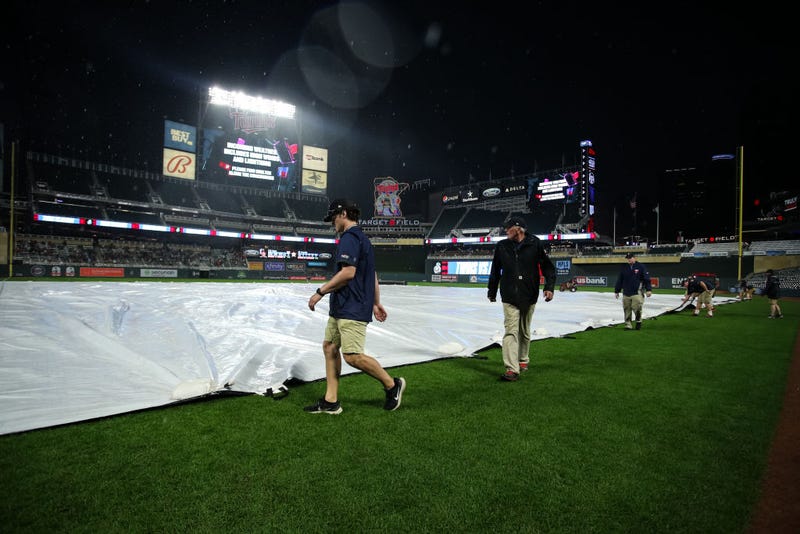 Members of the grounds crew pull a tarp on the field before the start of the fourth inning. Photo credit (Photo by David Berding/Getty Images)
By Lindsey Peterson

Wednesday's night severe weather in the Twin Cities forced the Twins and Astros off the field after three innings. Now that game will be made up as part of a shortened doubleheader on Thursday.

With the Twins down 5-1 after three innings the game went into a delay. Even after the severe weather wound down, the rain, thunder and lightening persisted forcing the game to be postponed.

Thursday's 12:10pm first pitch will now take place in the 4th inning of the postponed game. That game will be followed 30 minutes later by the regular scheduled finale of the series against the Astros.

Tonight's game has been suspended and will resume tomorrow at 12:10pm

Both games can be heard in their entirety on News Talk 830 WCCO and the Audacy App (restrictions apply) starting with the pregame show at 11:30 a.m.

Ticket Policies for Wednesday, May 11 and Thursday, May 12

Twins Season Ticket Holders with tickets for tonight’s (Wednesday, May 11) suspended game will receive credit back on their account. If a Season Ticket Account is paid in full, this credit may be applied for any future 2022 Twins regular season home game ticket purchase. Season Ticket Holders on the monthly payment plan will automatically have the value for this impacted game applied to their remaining balance.

Due to capacity limitations, ticket holders in the Thomson Reuters Champions Club, Delta SKY360° Suite and Premium Suites will be contacted by their sales representatives regarding their status for tonight’s (Wednesday, May 11) suspended game and will receive compensatory tickets to another 2022 Twins home game.

Single-game buyers holding tickets purchased directly from the Twins for tonight’s (Wednesday, May 11) suspended game will receive credit within 72 hours, which can be used for a future 2022 regular season home game. Fans holding tickets that have been purchased through a secondary ticket reseller must consult that reseller for ticket information.