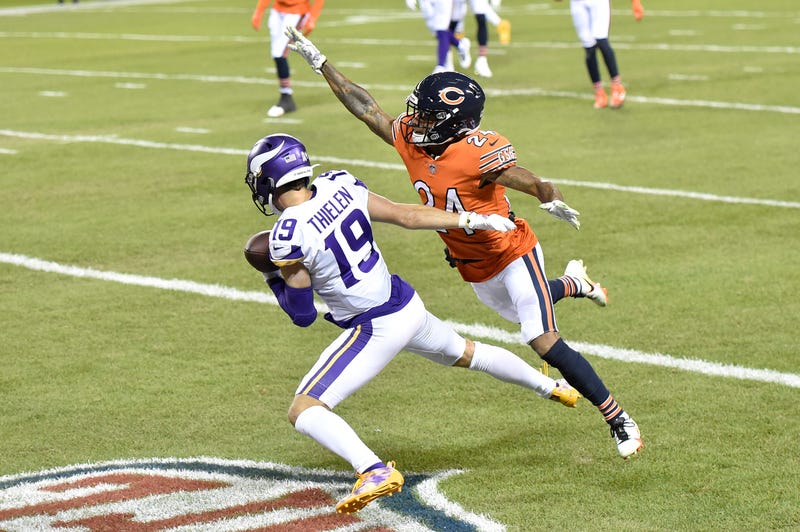 Adam Thielen was in the hot spotlight of media attention last week for two things: A catch for the ages ... and his choice of footwear.

Thielen honored game show legend Alex Trebek with his cleats and scored the game's first touchdown on a 17-yard one-handed catch -- in his left hand, no less -- that led the Vikings to beat the Bears 19-13 on Monday Night Football. He later scored the game-winning touchdown.

"I don't do a lot of one handers, but those are just more reactionary when you need to do it," Thielen explained live on WCCO Friday morning, adding that he didn't know for sure the ball was coming to him. "Kirk did a great job of trusting me and throwing it even though it was tight coverage and letting me make the play."

Thielen gave Cousins credit for both big plays, saying his instincts drove them.

This week the Vikings face Dallas, which Thielen said has had some bad luck but is still a good team. "We're going to get their best effort, they're coming off the bye ... They're in the hunt. We've got to be prepared and ready for battle."

But back to the shoes -- Thielen wore cleats emblazoned with the words "We will miss you, Alex." The inscription featured a blue background similar to the one from the final segment of "Jeopardy!" and included a "wager" of $1,900, an ode to Thielen's jersey number.

"Pretty cool, obviously wanted to honor him," Thielen said. He confirmed that Cousins did not, however, call the plays in the form of a question.

He's the most popular game show host of the NFL. Who is Alex Trebek?

Turns out Aaron Rodgers is a fan, too.

"Look, I've met a lot of famous people. It's probably rare that a person is very personable and can carry a conversation and makes you feel great about the interaction than the opposite, which is almost like, 'Oh man, maybe I wish I hadn't met that person because I would still think they're the greatest thing ever.' But Alex is definitely the former," Rodgers recently said of Trebek.