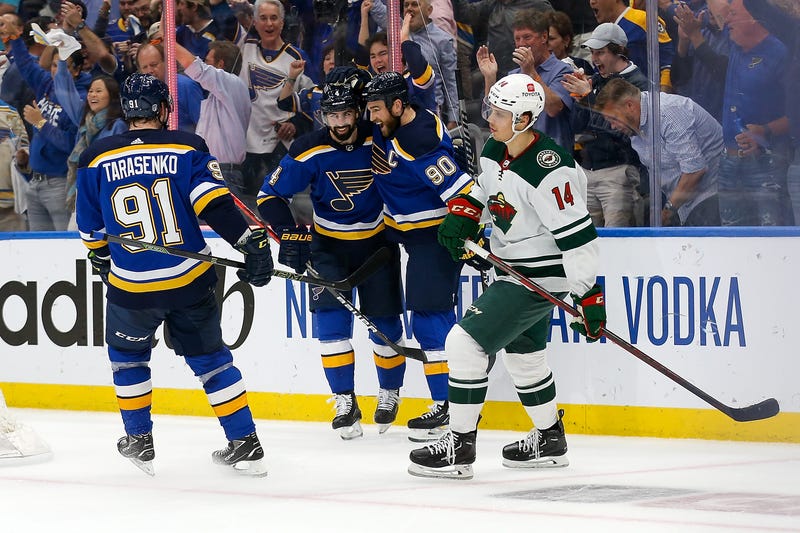 The opening minutes looked promising, but then a native son of the state of hockey changed everything.

Nick Leddy, the former Minnesota Mr. Hockey from Eden Prairie and standout underclassmen with the Gophers, broke the scoreless tie late in the first period to start the St. Louis Blues on their way to a 5-1 win to advance to the second round of the Western Conference Stanley Cup playoffs.

Ryan O’Reilly, Tyler Bozak and Vladimir Tarasenko scored in a dominant second period during which the Blues outshot the Wild 22-5 and took control of the game.

Dean Evason on our season and playoff series. #mnwild pic.twitter.com/KfHO8hmnd2

“We’ve been able to handle adversity, we’ve been a bounce-back group and we got to this spot tonight and we didn’t handle it very well,” Wild coach Dean Evason said. “You know, why? We’re gonna have to sit down and evaluate individually and collectively.”

The loss ends what many felt was the Wild's best chance to advance deep into the postseason for the first time since their unexpected run to the Western Conference Finals in 2003.

“This is one of the most special groups I’ve been a part of,” said goaltender Cam Talbot, who made his first appearance of the playoffs on Thursday night. “We’re really building something here. So, as much as this hurts right now, I’m proud of the guys, proud of the way we battled all season long.”

The Wild have now lost in the first round of the Stanley Cup playoffs six straight times.

Leddy's goal got the Blues going.

He took the puck in the St. Louis end, skated through center ice, and with his teammates on a line change and surrounded by all five Wild players, shot the puck past Talbot.

"Ledds makes a great play and a great goal,” O’Reilly said. “That just kind of helped us kind of settle down and start you know, building our game.”

Colton Parayko added an empty-netter and David Perron had two assists as St. Louis won its first series since defeating the Boston Bruins in the Stanley Cup Final in 2019.

The Blues will travel to Colorado to face the Avalanche in Game 1 of the second round. The date and time had not yet been announced.

Matt Dumba scored in the third period for the Wild, who hit three posts in the game, including two in the third.

After losing Games 4 and 5 and facing a must-win, Wild coach Dean Evason started Talbot over Marc-Andre Fleury in goal. Talbot, who finished the regular season on a 13-0-3 run, made 22 saves.

“It was a tough, tough battle,” Bozak said about the series. “That’s a very good team over there. It’s kind of a shame we played in the first round of the playoffs. It was two of the top teams in the West and they deserve a lot of credit for the season they had.”