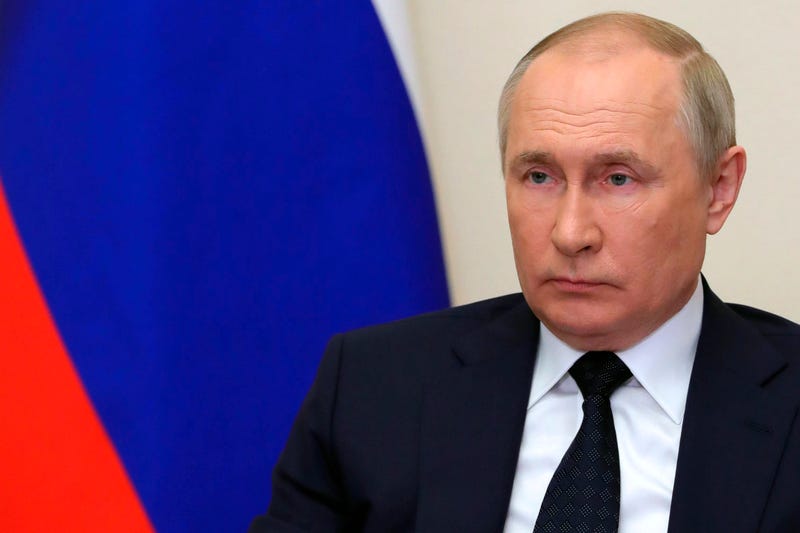 Putin told a meeting with government officials that “a number of Western countries made illegitimate decisions on the so-called freezing of the Russian assets, effectively drawing a line over reliability of their currencies, undermining the trust for those currencies.”

“It makes no sense whatsoever," Putin added, “to supply our goods to the European Union, the United States and receive payment in dollars, euros and a number of other currencies.”

As a result, he said he was announcing “measures” to switch to payments for “our natural gas, supplied to so-called unfriendly countries” in Russian rubles.

The Russian president didn’t say when exactly the new policy will take effect. He instructed the country’s central bank to work out a procedure for natural gas buyers to acquire rubles in Russia.

Economists said the move appeared designed to try to support the ruble, which has collapsed against other currencies since Putin invaded Ukraine on Feb. 24 and Western countries responded with far-reaching sanctions against Moscow. But some analysts expressed doubt that it would work.

“Demanding payment in rubles is a curious and probably ultimately ineffective approach to attempting an end run around Western financial sanctions,’’ said Eswar Prasad, a professor of trade policy at Cornell University. “Rubles are certainly easier to come by now that the currency is collapsing. But exchanging other currencies for rubles will be quite difficult given the widespread financial sanctions imposed on Russia."

“The hope that demanding payment in rubles will increase demand for the currency and thereby prop up its value," Prasad added, "is also a false hope given all the downward pressures on the currency.’’

Neil Shearing, group chief economist at Capital Economics, said: “It’s not an obvious move to me, since the (Russian) economy needs a supply of foreign currency in order to pay for imports — and energy is one of the few sources left.”

Habeck said Putin’s announcement shows once again that Russia is not a stable partner, dpa reported.

Despite severe Western sanctions, natural gas flows are still heading from Russia to Europe. The European Union is reliant on Russia for 40% of the natural gas it needs to generate electricity, heat homes and supply industry — a key reason why the EU has not applied its sanctions to Russia’s energy industry.

At the same time, across Europe, governments are slashing fuel taxes and doling out tens of billions to help consumers, truckers, farmers and others cope with spiking energy prices made worse by Russia’s war on Ukraine.

Vinicius Romano, a senior analyst at Rystad Energy, suggested that Moscow’s insistence on payments in rubles “may give buyers cause to reopen other aspects of their contracts — such as the duration — and simply speed up their exit from Russian gas altogether.”