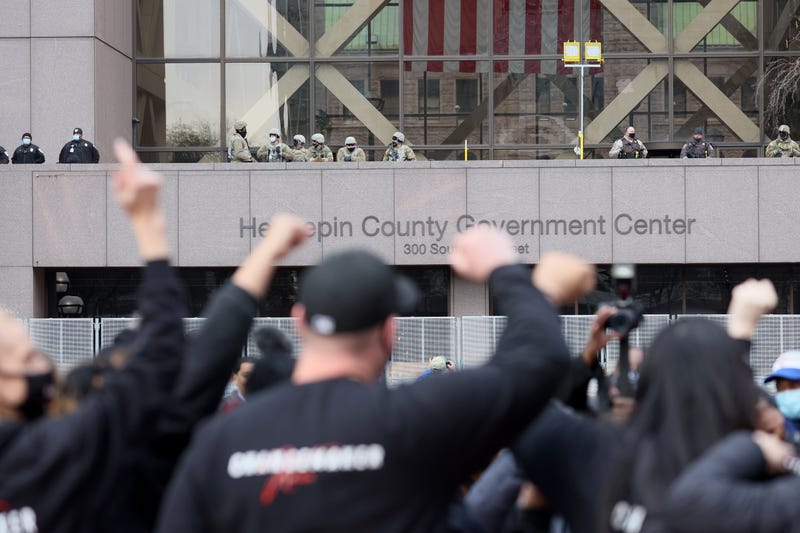 People react outside the Hennepin County Government Center after the verdict was read in the Derek Chauvin trial on April 20, 2021, In Minneapolis, Minnesota. Former police officer Derek Chauvin was on trial on second-degree murder, third-degree murder, and second-degree manslaughter charges in the death of George Floyd on May 25, 2020. After the video was released of then-officer Chauvin kneeling on Floyd’s neck for nine minutes and twenty-nine seconds, protests broke out across the U.S. and around the world. The jury found Chauvin guilty on all three charges. Photo credit Scott Olson/Getty Images
By Joe Hiti and Sheletta Brundidge

The protest will be led by the Minnesota Association of Black Lawyers, who have connected with bar associations across the state, according to Porter. The lawyers will be standing outside of the protest silently in the way of saying, “we want to see justice done.”

“So that’s where I’ll be tomorrow. I’ll be at the silent protest outside the government center … with other members of the legal profession in just kind of some silent camaraderie,” Porter said. “We want justice to be done at the sentencing hearing.”

Porter also spoke about the trial and how she would sentence Chauvin if she were in Judge Peter Chaills position.

“I would put it up to probably about 30 years given the aggravating factors that Judge Cahill found,” Porter said.

When it comes to the possibility of Chauvin getting probation, Porter thinks there is a “0.1%” chance that it will happen.

Porter also spoke about how she doesn’t think the defense has shown that Chauvin has any remorse or feels responsible for his actions. According to court documents, it looks like he chose not to speak with a probation officer, and since he did not testify either, there is no perspective from him, Porter said.

Porter thinks that Chauvin has been unable to humanize himself to the public and Judge Cahill by not showing remorse. Because of this and the four aggravating factors, Porter thinks Cahill will go above the sentencing guidelines.

“I would probably say we are looking at maybe 25 to 30 years,” Porter said

While some are worried that the sentencing from Cahill may not be what they are expecting, Porter believes that he will make the correct decision, not because the world is watching but because it’s the right thing to do.

“He was very fair and very thoughtful and really keen on individualized justice,” Porter said.

Porter is a lawyer and technopreneur who founded Seraph 7 Studios, a video game development company. Her company develops games with BIPOC heroes and storylines. Porter is also a USMC veteran and graduate from St. Thomas Law School.