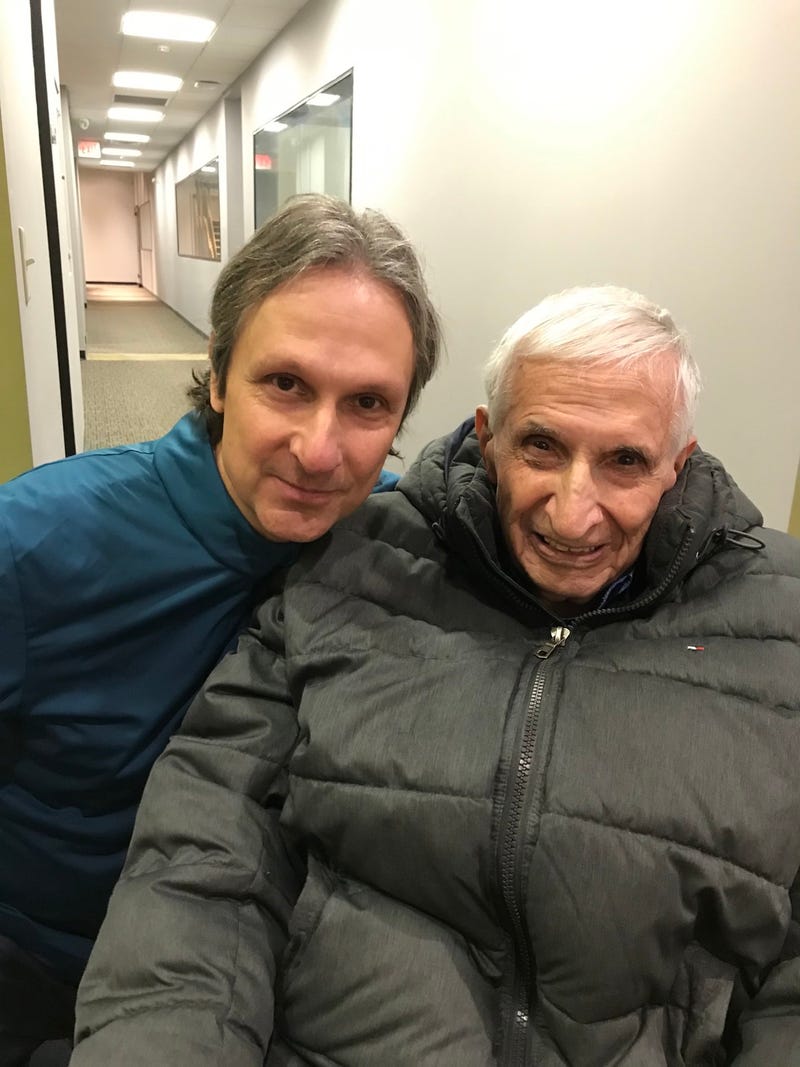 It was Chad Hartman, the son and News Talk 830 WCCO host, who first alerted to world to the passing of his father, Sid. His tweet announcing the passing was sent at 2:04p.m. Sunday afternoon and it’s been ‘liked’ over 34,200 times as of this writing.

My father’s extraordinary and resilient life has come to a peaceful conclusion surrounded by his family.

Sid Hartman was Minnesota’s voice inside the world of sports.  His legacy spans over 70 years in print with the Star Tribune and other papers which proceeded it in Minneapolis, and over 65 years on WCCO Radio, plus countless television shows, live appearances, etc. 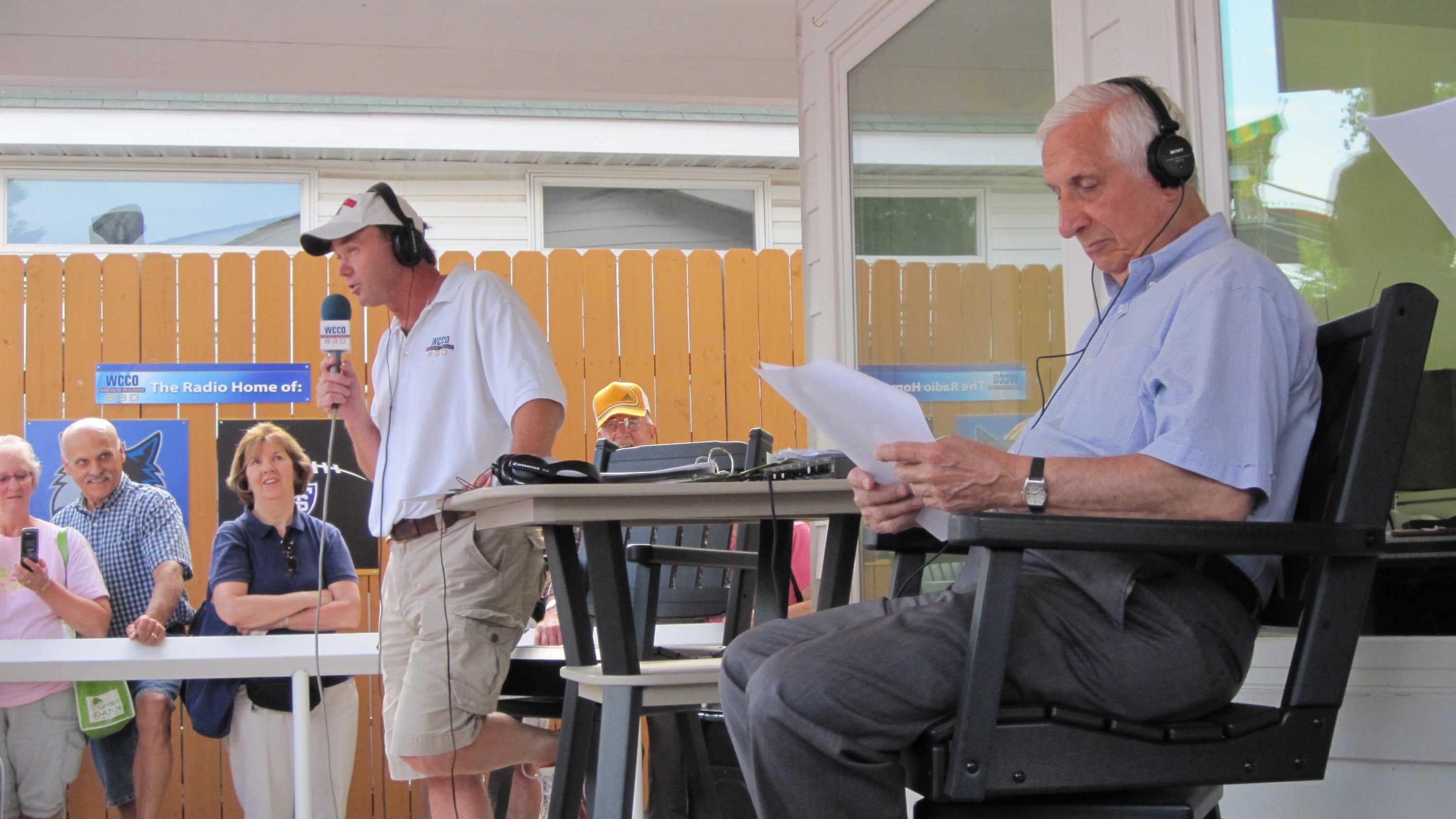 There is also a side of Sid Hartman most people didn’t see, and that is family man.

Hartman was married relatively later in life, in his mid-40s, in 1964.  It didn’t last long, divorcing in 1972. He had two children in that time, daughter Chris, and son Chad.

Sid was first of all married to sports and his job which meant sometimes that family took a back seat.

In later years, that softer family side came out, talking lovingly of his grandchildren, especially Quintin, Chad’s son who has unfortunately struggled so much with his health.

The family had gathered in Sid’s home as it appeared the end was near.  Chad told Dave Lee on the WCCO Morning News Monday about the last day of Sid Hartman’s 100 (and a half) years with us.

“There was a lot of crying yesterday,” Chad said. “There were a lot of storytelling.”

In a year that has seen so much, especially the pandemic, it has to be noted that Sid Hartman did not pass away because he had COVID.  However, Chad does think it contributed in a different way.

“His life was changed,” said Chad.  “Because of his age because he was so vulnerable, he had to stay home so much. We had to take care of him and hope we would make more progress.  And it took him from a man who I mean, you spent hundreds of days with him where he was out about and he was as competitive or he was living life. And unfortunately, he was at his house so much and it just changed who he was and a lot of his life.  The quality of life was still good. It's just, um, started to take a fairly dramatic turn.”

Sid was surrounded by a nurse at all times the last couple of years.  Anyone who ran across him saw one of two sisters, Lacey and Larissa, sisters who are always with him making sure he was taken care of, helping him get in and out of the car, get in and out of practices and games, and in some cases helping him record interviews.

Sid’s famous tape recorder he lugged around forever was finally replaced by an iPhone once his nurses learned how to help him record with it.

Saturday night, the call came from one of them to Chad, who immediately went to Sid’s house.

“I had to go over there in the middle of the night Saturday and he recognized me, and he rallied for a while.  And then I was able to get a number of family members over there and in the morning, we definitely had some hope.  But, unfortunately, his life came to conclusion. It was peaceful.”

Chad, at this point choking back some tears, explained how he said goodbye to his father.

“I told him in a very loving voice that I want him to hear me, that I loved him, and he said it back.  Everybody there heard it. And it's just a moment I'm not going to forget.”

WCCO Radio certainly played a large role in Sid Hartman’s life.  Sid would often say, more times than not when someone recognized him on the street, they would say, “I listen to you on the radio,” before anything else.

Sid came to us at WCCO in 1955, hired by General Manager Larry Haeg Sr.  He had done the occasional radio hit on WDGY, but it was WCCO that made Sid famous.  At that point, he had already been a reporter with the Star Tribune, and was in the midst of his time running the Minneapolis Laker franchise behind the scenes.

Chad talked about how much doing his radio shows meant to Sid.

“People need to realize to how much he loved WCCO Radio and how he so enjoyed talking to you (Dave Lee). And he loved being a part of this show. And it was just, it was essential to him, you know, for a long, long time. For the 6:40, 7:40, 8:40. That was it. And his competitive nature was every bit as strong with WCCO Radio and being great on your show on being great with Roger (Erickson) and Charlie (Boone) and Steve (Cannon) and this entire company.  You know, that meant the world to him.”

It was the legendary Steve Cannon who coined the famous phrase “close, personal friends” when it came to Sid.  Cannon also gave Sid the nickname “Oracle” because he knew everyone and everything when it came to sports.

During his last show on WCCO Cannon told listeners, “Sid’s been a real asset to this show. This is the man who works harder than anyone in sports in this market. What I want to do with Sid is not all this monkey business, yelling and screaming and pretending to be putting each other on. That’s show business. I don’t do that with Sid. I elicit the information. Because he’s got it.”

As much as WCCO may have meant to Sid, it’s been clear over the last 24 hours that Sid meant just as much to listeners.  When you get space in someone’s kitchen, clock radio, car radio, and in the last several years on their phone or computer, there’s a relationship built.  Especially over the course of seven-plus decades.  Sid basked in the glory of a win and was saddened by the losses along with all of the fans.

Sid’s family meant the world to him.  But Sid was certainly a part of all of our families too.  We join his son, daughter, grandchildren, and extended family in mourning the loss of this legendary figure in Minnesota’s history.

This certainly is a time for sadness and loss, but also for a life to be celebrated.  Chad told Dave Lee, “I say this with humility. He loved his life, Dave, because he loved the pursuit.  A genuine thank you to all the people have reached out because most importantly, my father would have been so touched by it. So I really appreciate what everybody's done.”