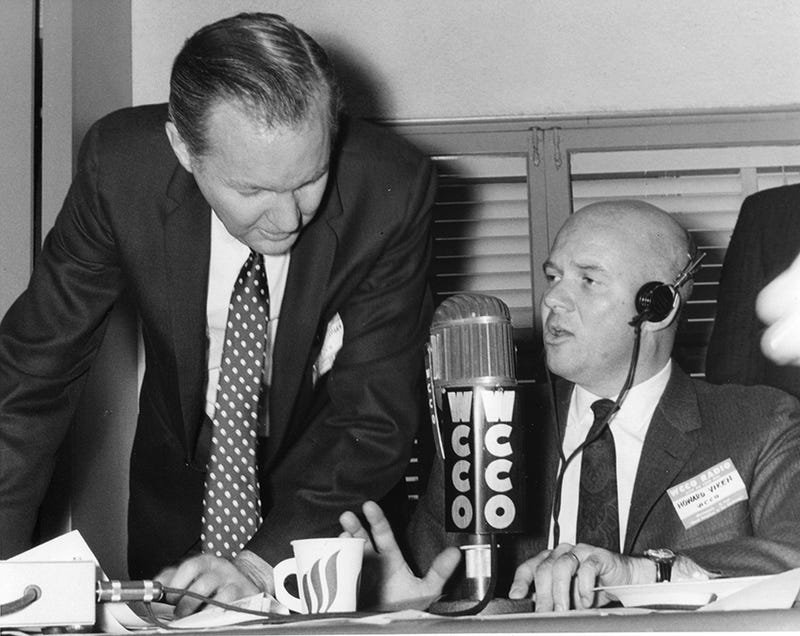 Legendary voice of WCCO Radio Howard Viken passed away Saturday morning at the age of 97.

Viken had been in "so-so" health recently, according to former WCCO Managing Editor Steve Murphy who spoke to Viken just last week. He had retired to Florida, but returned to the Twin Cities in recent years.

Viken joined WCCO in 1950 and began an amazing 39-year run for the station. Viken became one of the most recognized names in his home state of Minnesota.

"When Howard started, he told me his job was to introduce segments of network radio like soap operas and comedies," Murphy said. "Once television came along, the local radio stations had to come up with local programming and Howard was one of the first to pick-up that mantle."

"When you hear 'CCO Radio as opposed to WCCO Radio, think of Howard, because that's when the station made that transition to becoming the good neighbor and the friendly station people enjoyed having on at home, in the car, and in the barn," added Murphy.

Viken was a former Marine who fought in World War II in the Battle of Guadalcanal and Iwo Jima. He returned home to study speech and journalism at the University of Minnesota, and then continued on to further study broadcasting at Brown College.

Viken famously said at one time he was able to pick up WCCO's clear-channel signal while stationed in Guam, 7,000 miles away.

Viken’s shows on WCCO were filled with jokes and wit.  According to the Pavek Broadcasting Hall of Fame, Viken, “in response to management’s dictum to be fun and be yourself, led broadcasting into a new era. Just as his predecessor, Cedric Adams, set the standard for a casual and spontaneous on-air style, Viken was the first to successfully transition into the creative and high-energy morning show format that is commonplace today.”

Viken did shows that were an extension of his personality. His shows were lighthearted, full of laughs and fun. If he liked a song or comedy routine, he figured his audience would, too––most often he was right.

"Eric Eskola, Denny Long, and I had the good fortune of visiting Howard in January 2020 before the COVID restrictions were placed on visiting people in nursing homes, we had the greatest time," Murphy said. "There Howard was, 96 years old, and he had great fun talking about the days he was at WCCO Radio from 1950 until 1989."

Viken had a smooth, deep voice that made audiences feel right at home. Viken often shared the airwaves with Joyce Lamont, who passed away in 2014. The two had a remarkable, folksy chemistry that was beloved by WCCO listeners.

"The thing that people mentioned time and again is that they felt Howard was a friend and they grew up with him."

Obituary details are not available yet but will be shared by Viken’s family at a later time.