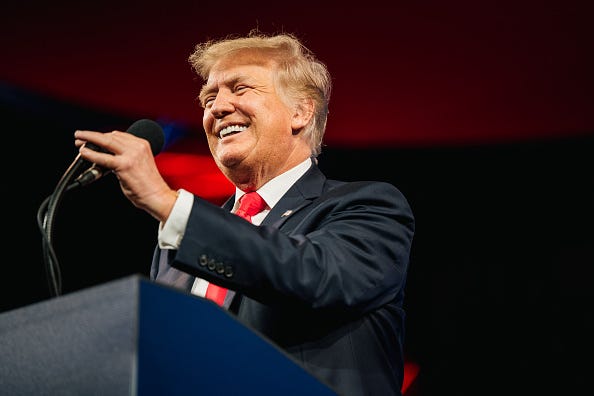 Former President Donald Trump offered his opinion of Kyle Rittenhouse on Tuesday with Fox News' Sean Hannity after meeting with the teen at Mar-A-Lago.

Trump opined the teen had been a subject of "prosecutorial misconduct" in his trial on charges of shooting three men, killing two, during civil unrest in Wisconsin.

"[Rittenhouse] should not have had to suffer through a trial for that. He was going to be dead if he didn't pull that trigger, that guy that put the gun to his head in one-quarter of a second he was going to pull the trigger. Kyle would have been dead," Trump said.

TRUMP: Kyle Rittenhouse “just left Mar-a-Lago a little while ago.”

Rittenhouse did a sit-down interview with Tucker Carlson in which he also talked about prosecutorial misconduct.

"I believe there's a lot of prosecutorial misconduct not just in my case but in other cases," he said. "It's just amazing to see how much a prosecutor can take advantage of somebody. If they did this to me, imagine what they could have done to a person of color who doesn't maybe have the resources I do or is not widely publicized like in my case."

Kyle Rittenhouse: "This case has nothing to do with race."