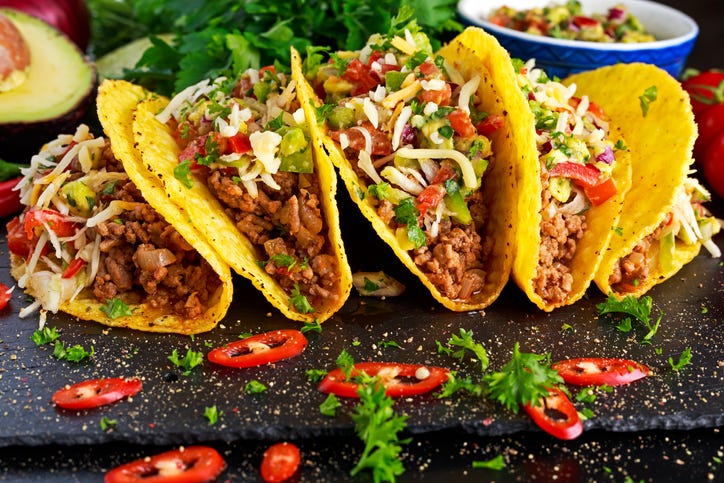 Taco Bell has announced they are bringing back their popular “Steal a Base, Steal a Taco” deal.

For those unfamiliar with the offer, the fast food chain will once again give fans a free Doritos Locos Taco whenever the first base is stolen during the upcoming World Series. Game on!

Despite its “crazy” name, the Doritos Locos Taco isn’t all that strange as it’s beef, cheese and lettuce wrapped up in a taco shell made out of Nacho Cheese Doritos. Tasty and simple.

Now for those looking to step out of their taco box, there are a slew of utterly insane options out there.

From the exotic to the unconventional, here are seven truly bizarre tacos waiting to wet your appetite --if they don’t make you lose it.

Soft, blue corn tortillas, chilies, cheese and ...wax moth larvae! This taco will definitely have you bugging out.

Known locally as chapulines, this Mexican delicacy is just a hop, skip and a jump away from getting in your belly.

Kangaroo tacos anyone? I made this creation in the spur of the moment when I came across these kanga fillets. And damn it was #yummilicious😋 Kangaroo fillets are really nice cooked medium or medium rare, over cook them and it’s a bit chewy. . . #kangaroofillet #kangarootaco #tacos #adventurousfood #foodporn #tacofusion #adventurouscooking #lovetocook #thuycooks #thuyeats

It may look like regular beef, but these have more kick. Australia legalized kangaroo meat for human consumption in 1980 and has seen its popularity slowly rise. Book your tickets Down Under if you’re up for the gamey treat.

If you want Mexican and they want Japanese, compromise! A tempura nori (seaweed) shell, filled with salmon, tuna, rice and drizzled in eel sauce. Delicious and you don’t even have to learn to use chopsticks.

There's never too much caviar. #CaviarTaco

A post shared by The Ritz-Carlton San Francisco (@ritzcarltonsanfrancisco) on Jan 6, 2018 at 5:39pm PST

If you’re feeling bad and bougie - and have money to burn - a $78 fish egg taco will hit the spot.

Yes you see it and damn it's definitely on my re-up list. #baconshelltaco

This is what it looks like when you die and go to Keto heaven. Go ahead, pig out on all this low-carb crispy goodness.

I scream, you scream, we all scream for ice cream tacos. Sweet!