This past year in 78 games, Thompson switched from wing to center and netted 38 goals.

How does a player improve his career high in goals by 30 in just one season?

It started with Don Granato.

The Sabres head coach does a lot of thinking in these summer months and a lot of it is out of the box. Granato analyzed what Thompson brings to the ice, and decided his talent fit those of a center. Granato didn’t care that he hadn't played center regularly since before his college days at UConn.

The reason Granato thought it was a good idea is teams were using the boards to kill plays that Thompson was trying to make. Opponents would attack him from his open side, knowing the boards would shut him off on the other side.

Granato wanted Thompson cutting to the middle, which opened up all the options for the big man with long reach, good speed and huge talent. Things worked so well, Thompson should’ve been the Sabres' All-Star representative instead of Rasmus Dahlin.

Thompson is 24-years-old, and he knew he had to take the next step in his career.

“I think it was important that it happened now, and it goes back to before the season," said Thompson during his end-of-season press conference. "'Donny' and I had a lot of talks on our outlook for my long-term future, and we both felt that I was going to be a good player in the league. His biggest thing was it’s got to happen now, and that’s something that I took to heart. I wanted to be a difference maker for our team.”

The center position wasn’t totally new to Thompson, but he hadn’t played the position on a regular basis since before he started at UConn during the 2015-16 season.

“I always played center growing up, but hadn’t had the opportunity in pro hockey yet," Thompson said. "It took adjusting, and it's something that I still need to work at and get better at.”

Before the 2021-22 season started, Thompson had scored 18 goals in 145 NHL games with Buffalo and the St. Louis Blues. I felt Thompson had, at least, 25 goals in him, but I didn’t know if he could ever bring that talent out into his game.

“It’s shown me that I can be what I set out to do at the beginning of the season and exceed my own expectations," Thompson said. "That gives me excitement and confidence moving forward to see, 'Can I beat that? Can I go even higher?' I think it gives you that internal hunger to do more and continue to grow and get better.”

Since Thompson hasn’t had to take faceoffs in seven years, it only stands to reason that he’d struggle with it at the NHL level. He understands that he must be better than 40%, and it’s something he’s been working at.

Patrice Bergeron of the Boston Bruins led the league, winning 61.9% of his draws. Former Sabres center Ryan O’Reilly was second at 56.8%.

You’d be hard-pressed to find just one player on this current Sabres team that is selfish, entitled or thinks he’s better than another teammate. These guys are close, and it’s very obvious that it’s not an act.

Thompson very much enjoys being with his teammates on and off the ice.

“It’s good character guys that care for one another, and it’s fun coming to the rink," he said. "Even when you leave the rink, you want to go and hang out with them still. There’s no clicks (that’s a big change from the past), and everyone hangs out with everyone. That’s important.”

The Sabres have four good young players to play center in the top-nine, which means one may have to move to the wing. That position went from having Jack Eichel and nobody else to now being a strength with Thompson, Dylan Cozens, Peyton Krebs and Casey Mittelstadt. 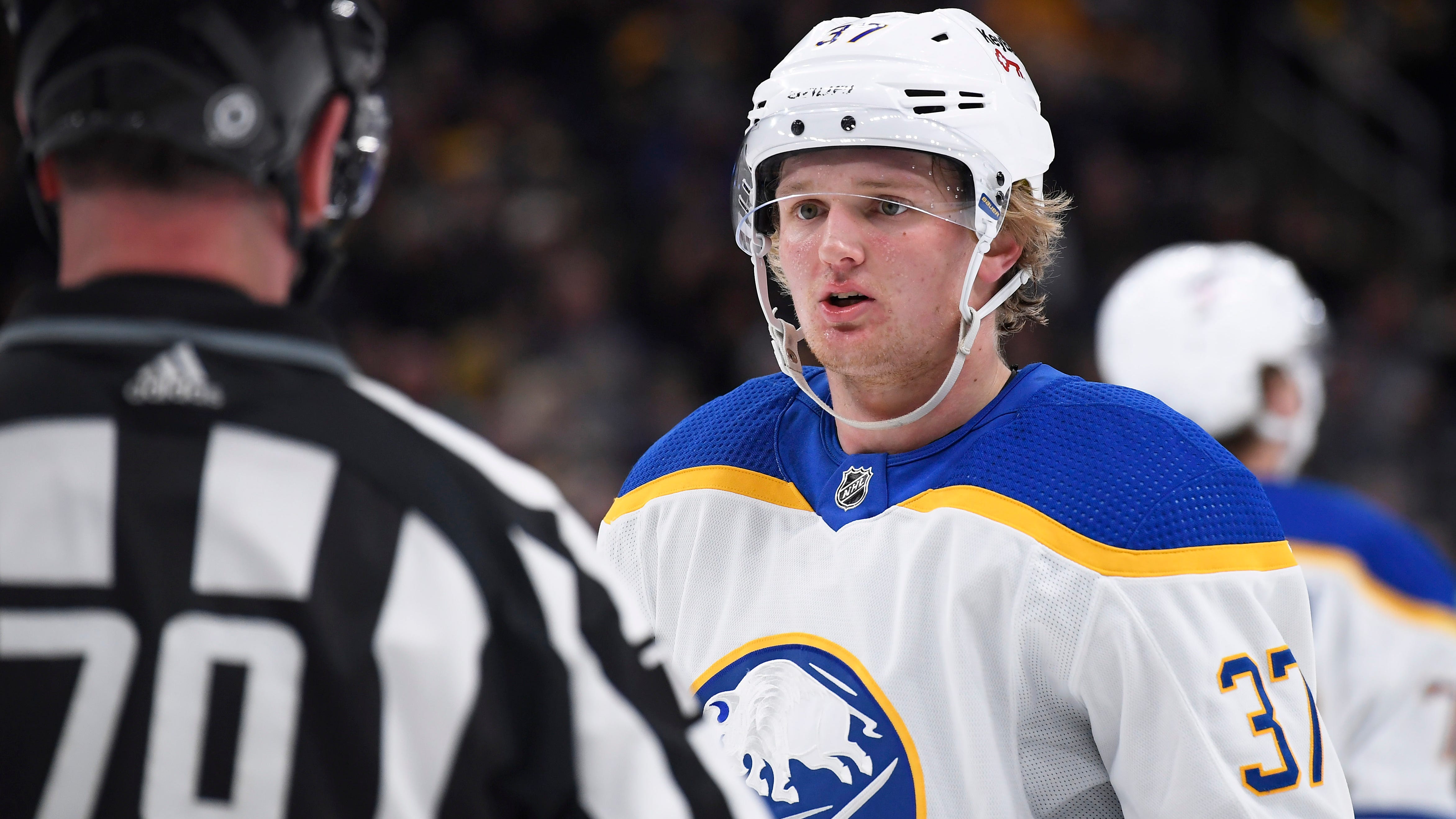 Sabres know one young center will have to play wing

That also doesn’t include the three 2022 first-round picks the team selected with Matt Savoie, Noah Ostlund and Jiri Kulich.

Cozens played very well down the stretch for the Sabres last year, but it didn’t translate into goals. Where it did lead him was to Team Canada’s top line at the World Championship, scoring a tournament-high seven goals from the left wing.

Thompson can’t wait to see how good Cozens is going to be come next season.

“He’s an incredibly internally driven person. It’s going to be exciting to see what he did in the offseason," he said. "I don’t think there’s any question that he’s going to have a big year, because he’s willing to do whatever it takes.”

What I liked about Thompson is, it didn’t matter if it was Alex Tuch or Victor Olofsson on his right wing. He pushed the play and never dropped off in his play, as both wingers excelled playing with him, as did Jeff Skinner.

Thompson still has one year left on his contract that pays him $1.4 million. Only one 40-goal scorer makes less than $6 million, and that is Elias Lindholm of the Calgary Flames at $4.85 million. Only 16 players scored 40 goals or more, and only five of them were centers.

If Thompson’s production doesn’t fall off, he will likely see his salary go up to around $7 million dollars per-year.