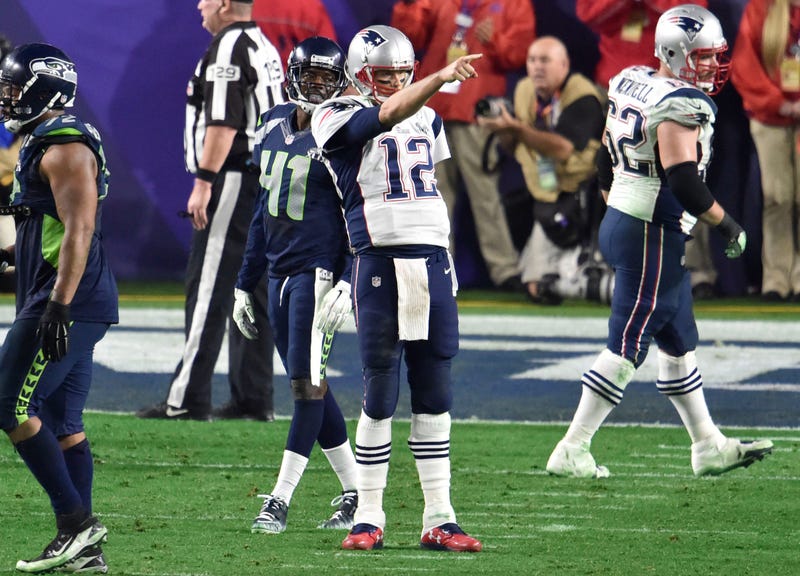 The Patriots were one yard away from transferring their decade of dominance over to the Seahawks. One of the most powerful running backs in football, Marshawn Lynch, was ready to bulldoze his way into the end zone to give Seattle the lead in Super Bowl XLIX with 26 seconds remaining.

At that point, the Seahawks were led by a dominant defense and good young quarterback with a penchant for game-winning drives. They were playing in their second straight Super Bowl, having routed the Peyton Manning-led Broncos in 2014. And now, they were on the verge of beating Tom Brady, too.

Of course, that did not happen. Malcolm Butler intercepted Russell Wilson and cemented the dramatic Patriots win. The Seahawks have never been able to shake that loss. According to our pal Seth Wickersham, it remained a cause for contention deep into the 2016 campaign. Richard Sherman, more than any other player, seemed to be permanently scarred. He berated offensive coordinator Darrell Bevell for passing from the one-yard line at the end of a Thursday night game, even though Wilson connected with Doug Baldwin for a touchdown.

Since Super Bowl XLIX, the Seahawks have only won two playoff games and missed out on the postseason entirely last year. Instead of being poised for more Super Bowl appearances, they appear to be heading towards a massive rebuild.

The Patriots ruined the Seahawks, and in turn, reminded us of their own excellence.

There’s little doubt the Super Bowl loss left a psychological scar. But the cold realities of the NFL also wound up torpedoing the Seahawks’ dynasty in waiting. First, there was Lynch’s surprise retirement during Super Bowl 50. Then, linebacker Bruce Irvin left in free agency, because there wasn’t enough money to pay him. In 2014, the Seahawks inked Sherman and Earl Thomas to big extensions. The following year, they tied up Russell Wilson. Last season, they re-signed Kam Chancellor.

As a result, only four teams have less money to spend this offseason than the Seahawks.

Injuries have played a role, too. Thomas publicly pondered about retirement after breaking his leg in 2016 and Chancellor and linebacker Cliff Avril both suffered gruesome neck injuries last season. At the NFL Combine, Pete Carroll said he wonders whether those two will ever be able to play football again.

The dismantling of the Seahawks has already started. They traded Michael Bennett to the Eagles Wednesday, despite the lineman’s three straight Pro Bowl appearances. Sherman’s teammates and mother also posted cryptic messages on social media, hinting at the All-Pro’s exit. On Wednesday night, it was reported Sherman, who is coming off surgery on both Achilles, will likely split with the Seahawks in the coming weeks.

At the NFL Combine, Carroll warned it could be a time of big change.

The Patriots have faced all of the same obstacles over the last 17 years. They’ve suffered major injuries, lost key free agents and shuffled out entire rosters –– save for the best quarterback of all-time. Tom Brady’s excellence is the No. 1 reason for the Patriots’ success under Bill Belichick. But in moments like these, it’s worth pointing towards Belichick’s roster construction, too.

The Patriots gradually replace their nucleus. In 2009, it was Richard Seymour. The next season, they traded Randy Moss. Then in successive years, they lost Wes Welker and Aqib Talib. Chandler Jones and Jamie Collins departed within eight months of each other, but the latter exit appeared to be sudden.

At the same time, an entire new crop of players were brought into the fold: Julian Edelman, Devin McCourty, Rob Gronkowski, Dont’a Hightower, Butler. And when the Patriots do makes lots of changes, like in 2007 or last offseason, they add. They haven't been in a position like the Seahawks, who are being forced to replace.

This is all possible, because Brady is content with playing at below market value and Belichick has a proclivity for dumping players at the right time. Seemingly every general manager in the league would have extended Darrelle Revis after Super Bowl XLIX. But Belichick let him walk, and three years later, he’s on the fringes of the NFL.

There is a lot of uncertainty around the Patriots right now, leading with Gronkowski’s rumored retirement. But it took 17 years to get to this point. The Seahawks, and their Legion of Boom, only lasted six.