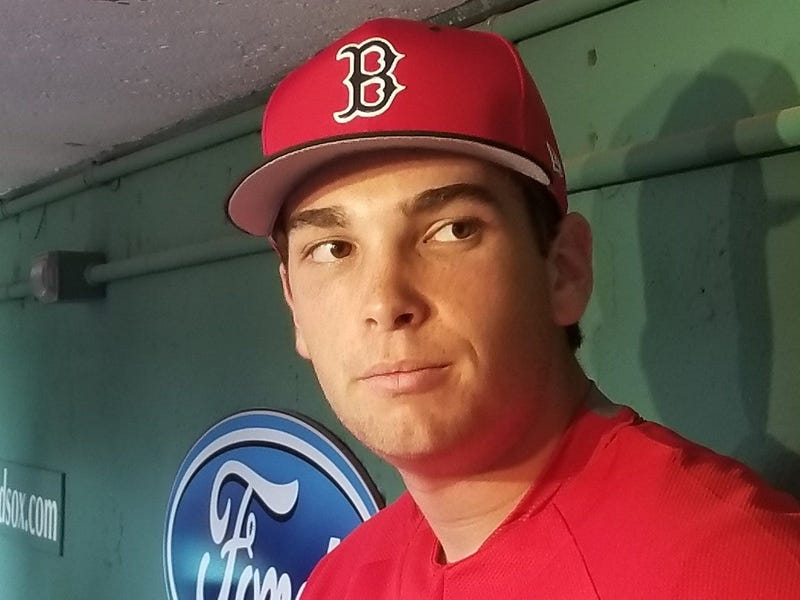 Standing at 6-foot-4, the lefty hitter routinely lofted mammoth fly balls into the Fenway seats. If you were looking for launch angle, what Casas offered was right up your alley. It was the second time he had gotten the opportunity to test his skills at the home of the Red Sox, having worked out with the team just prior to June's draft. And while the environment wasn't exactly the same -- with a gaggle of media members anxiously looking to get a glimpse of the third baseman -- the results and the swing remained the same.

"I mean, BP's BP and baseball's baseball," Casas said. "The only thing that was different was the park and the players around me but felt pretty normal. Hitting baseballs is what I do best."

But then you get a reminder of where we're at with this kid.

He, of course, was referencing the 27-year-old Christian Vazquez.

But, more times than not during Saturday's workout, it seemed like Casas belonged. His stature is one thing -- standing an inch over the other guy in his hitting group, J.D. Martinez -- but it was the demeanor when conducting an interview that went for about six minutes in the Red Sox' dugout that separated the Florida native from your garden variety high-schooler.

"I just wanted to come out here, I didn't want to look stupid in front of these guys," he said. "I wanted to make a good impression and trying to be myself around them and they welcomed me with open arms, so I'm really happy they welcomed me so graciously."

As for Fenway Park, Casas added, "I like that it works with my swing. My swing is one that, it’s pretty uppercut toward left-center, so hopefully down at JetBlue and eventually, hopefully, here I can work that wall pretty well, and then I’ve got pull-side pop to the right side too. So, I like the way it fits my swing, and I can see myself playing here."

The plan for Casas is to start playing in games for the Gulf Coast League Red Sox next week, having simply observed the goings on in Fort Myers since agreeing to terms. And while Red Sox manager Alex Cora bemoaned the loss that his alma mater, the University of Miami, endured in not getting the slugger to enroll, Casas offered a pretty good explanation for his chosen career path.

"My love for the game. It speaks for itself," said Casas when asked why he chose to go pro (signing a $2,552,800 bonus) instead of heading to college. "I love coming out here and competing, it doesn't matter if it's down in the GCL, it doesn't matter if it's any level of this organization, and it hasn't mattered ever in my career, no matter where I've played, whether it's high school or any country or anywhere. My love for the game speaks for itself and I love playing the game. It was an easy choice for me."