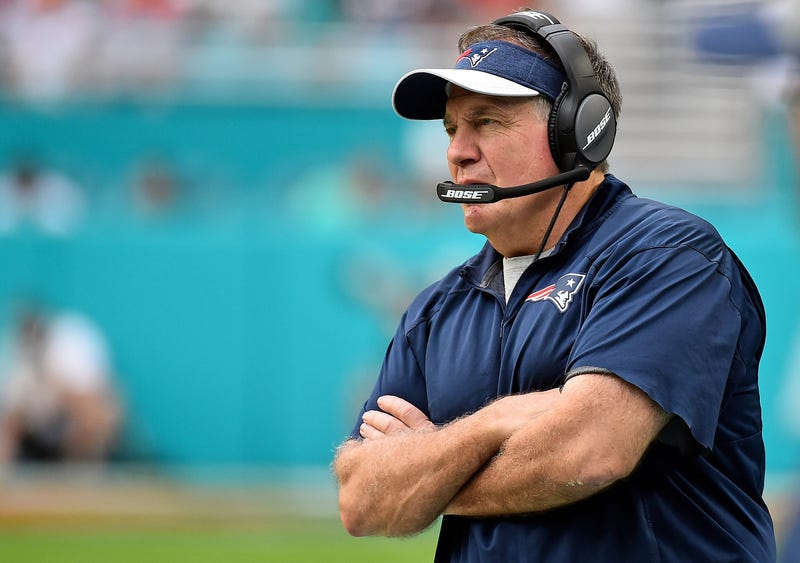 It's not too often NFL referees get publicly praised, as the majority of their attention usually comes in a negative light following missed or questionable calls.

But, Bill Belichick had tons of praise for the job they do when speaking on a conference call Monday. The long response came following a question about Walt Coleman officiating his final game Sunday at Gillette Stadium. Robert Kraft presented him with the game ball in the officials locker room following the contest.

"I saw Walt before the game," Belichick began." Before every game the referee comes over to you in pregame warmups and goes over the things that you’ve talked to – so before each game, an hour-and-a-half before each game, you meet with two officials from the crew and talk about things for that game that they may bring up or you may bring up or whatever it is. And then when you go out for pregame warmups, the referee comes over and just confirms that he’s discussed the things that were talked about in the first meeting and might either follow up on that to see if there are any other questions or comments or anything and kind of go through a little bit of the communication procedure. It’s basically all the same but some crews just do it a little bit differently than others. Just the efficiency or the way they do it, so it’s a good thing. When I saw Walt there before the game we exchanged that, and then I saw him after the game. He’s had a great career.

"There’s no doubt those guys – all of the officials – they have such a hard job to do. I know we look at the replays and analyze them millisecond by millisecond and everybody has all of the answers on what it should be and what it shouldn’t be. These guys are out there trying to do it live and at full speed. They make so many amazingly good calls and some of the plays are just so close that it’s less than an inch or less than, not even a split-second. Just again, just a millisecond of whether it goes one way or another way. They just get so many of them right. I think their ability to control the game, which I think over the last couple of years, particularly this year, I’ve seen especially in our games, seen very few incidents. A couple of years ago there were brawls and stuff like that. I’m not saying that there isn’t – obviously, it’s an emotional game but I think they do a great job of keeping the game under control of officiating with a discipline that enhances the game without it becoming a bunch of fights and taunting and all of the stuff that we’re trying to keep out of the game. That’s a fine line. It’s a hard thing to do, but they do an excellent job of it and Walt’s done it for a long time.

"Look, I respect all of the officials. I respect what Walt did and some of the other guys that are now commenting on the games, like Mike Pereira and people like that that have gone from – Dean Blandino – that have gone from officiating to TV or guys like Ed Hochuli that have retired in recent years. What they added to the game during the time that they officiated it, regardless of what their position was, they were incredibly valuable to the game. We saw a short period of time where we didn’t have that quality of officiating and I think we’re all glad that we have the guys that we have and appreciate the job that they do."