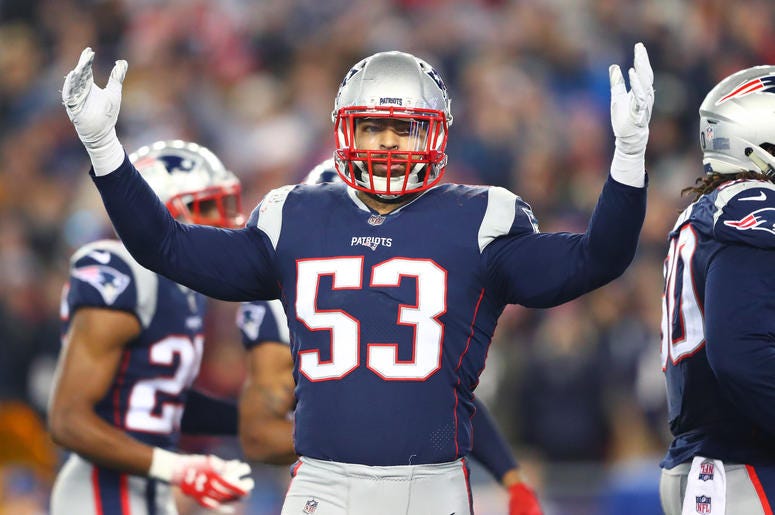 FOXBORO -- Thursday was a big day for Kyle Van Noy.

It is the two-year anniversary of him being traded to the Patriots from the Lions.

New England sent a sixth-round pick to Detroit in exchange for Van Noy and a seventh-rounder just before the trade deadline in 2016. The Patriots linebacker noted the anniversary on Twitter Thursday morning: Happy anniversary to me and my trade day! What a day that turned out to be! #blessing #thanksbilltrill #thanksbob #champ

Speaking in the Patriots locker room later in the day, Van Noy detailed how much the trade did for his career.

“Saved it, probably, honestly,” he said. “It’s been a blessing. Yeah, kind of changed my whole life type of deal. It was a huge blessing.”

Van Noy expanded on thanking Bill Belichick in his tweet.

"Definitely got to thank him,” he said. “He’s a big part of why I’m here. If not the reason. … I feel like all the coaches — since I’ve played numerous positions here — I feel like all of them, you name it, from Coach Flo [Brian Flores] to BD [Brendan Daly] to when Matty P [Matt Patricia] was here, they’ve all seemed to bring the best out of anybody that’s in the room. It’s kind of the expectation here. And just trying to do the best that I can to provide for the team.”In three years with the Lions (30 games), Van Noy had 36 tackles and a sack. In three seasons with the Patriots (27 games), Van Noy has 135 tackles and 6.5 sacks.

And you can see why he's so thankful for the opportunity.