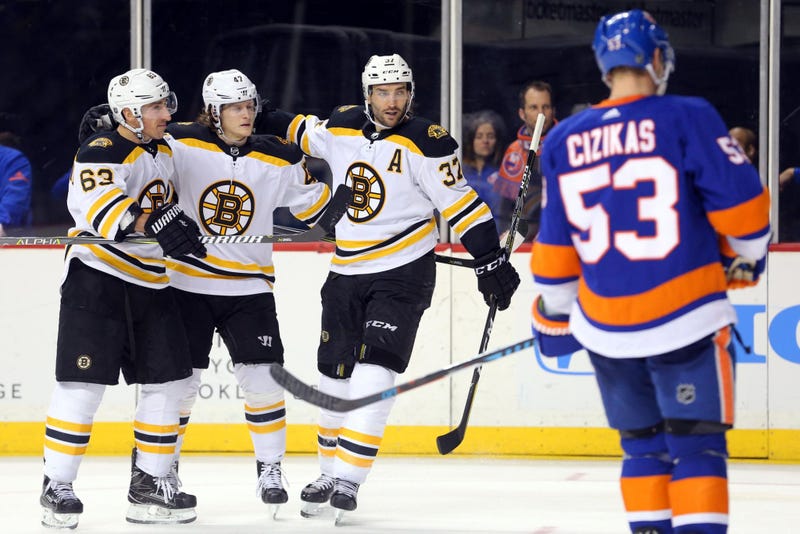 The Brad Marchand-Patrice Bergeron-David Pastrnak line saw one of their truly ridiculous runs come to an end in Tuesday night’s 5-1 win over the Islanders.

It was in the first period that Bergeron won a defensive-zone faceoff, but saw the puck deposited into their own net when Jordan Eberle jumped on a seemingly unchallenged and random fall-and-turnover from the Bruins’ Brandon Carlo. It was the first time that the line had been on the ice for a five-on-five goal against this season -- it’s January, in case you didn’t know -- and that’s with over 220 minutes together entering play.

It’s painfully unfair given the fact that the line did almost nothing wrong on that goal against (it doesn’t happen without Carlo falling down), but it was the response from the Black and Gold’s top line that told you why they’re the best at what they do.

Midway through the second period, and just seconds after the Boston power play had come to an end, Bergeron took advantage of some confusion from Islanders goaltender Jaroslav Halak and banked a puck off him and in for his 12th goal of the season.

And it was in the third period that Pastrnak came through with a nifty takeaway from New York’s Cal Clutterbuck at the Islander blueline and dished it to Marchand for the B’s third goal of the night, and the one that officially put the Islanders to bed.

In addition to their production and normal puck-possession prowess, Marchand and Pastrnak each paced the Bruins with a team-high five shots on goal. Bergeron, meanwhile, won 12-of-17 battles at the dot, including a 10-of-13 mark at five-on-five. They also help keep the John Tavares line, one of the NHL’s top units, in check.

It’s hard enough to limit this line, which has straight-up eviscerated the competition since first united last season, but tonight was proof that not even a streak-snapping goal against can slow them down. If anything, it does the opposite and gets ‘em angry.