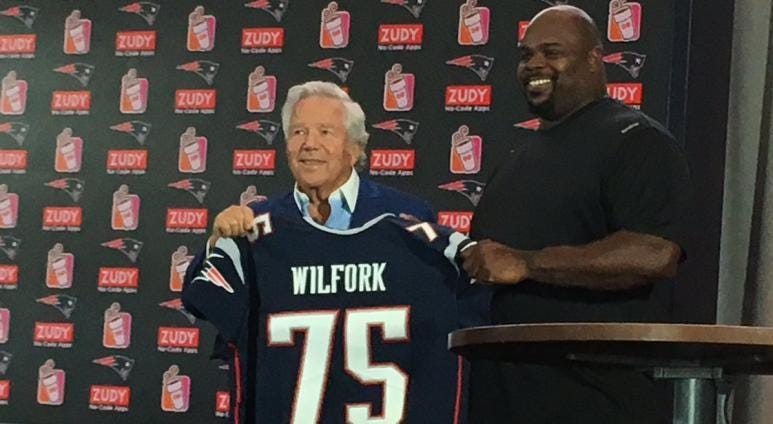 When Vince Wilfork was presented with a symbolic one-day contract during his Patriots retirement ceremony Wednesday, he jokingly asked if he would receive a check. Without skipping a beat, owner Robert Kraft said the team had already given it to Wilfork’s wife, Bianca.

Wilfork will largely be remembered for his dominant play on the defensive line and outstanding leadership qualities. Head coach Bill Belichick called him the “captain of captains,” which is perhaps the highest level of praise the Hoodie could ever dole out. But Belichick didn’t only compliment Wilfork. He also acknowledged Bianca, saying she attended more practices than a “quarter of the team.”

Standing at 6-foot-2 and 325 pounds, Wilfork was a ferocious force on the gridiron. But off the field, the real force in Wilfork’s life was Bianca, who served as his business advisor and closest confidante. It’s an unique relationship that serves as one of Wilfork’s greatest legacies.

Wilfork and Bianca met in 2001, when he was a freshman at the University of Miami. At the time, Bianca had just thrown her baby’s father out of the house, and was working two jobs so she could support him.

It wasn’t long before Wilfork and Bianca became inseparable. Bianca often spoke with Wilfork’s college professors, who called to make sure the stout defensive tackle was on top of his assignments. When Wilfork decided to go pro, Bianca interviewed prospective agents, quizzing them on intricate contractual details.

"His job is to go out on the field and [play>, and my job is everything else," she told the Boston Globe in 2008. “What he takes on his body, I take on my brain. We do it together.”

Bianca’s influence didn’t stop at the financial end. She also played a leading role in his training and on-field preparation. This was especially evident prior to the 2014 season, when he was rehabbing from a torn Achilles. Bianca and Wilfork worked out together, waking up at 5:00 a.m. to train and shed weight.

“We worked our tails off. My training camp began a long time ago -- in March,” Wilfork said to reporters, per ESPN. “I’ve been working for a long, long time and there’s a reason I feel good and a reason I have the confidence to play. It won’t stop.”

A gregarious two-time Super Bowl champion, Wilfork’s post-career options appear to be limitless. If his incredible ribs-sponsored retirement video is any indication, Wilfork will excel during his next phase of life.

There’s little doubt Bianca will be the driving force behind his next ventures, too, wherever they may take him.