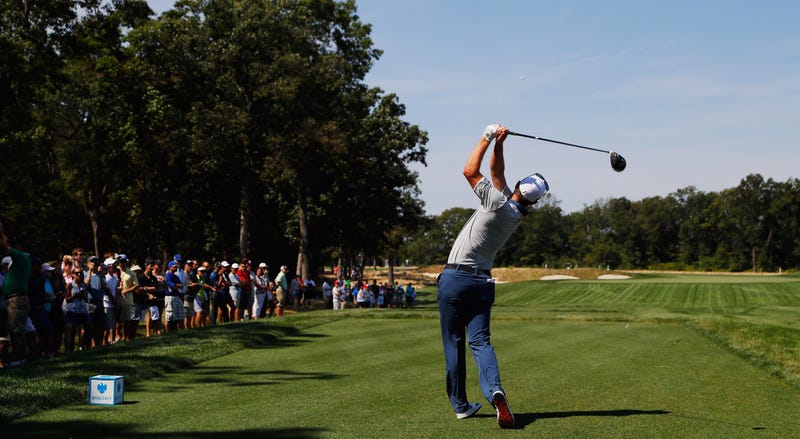 Bethpage Black is ready to host 156 of the top golfers in the world.

The famed public course is in tremendous shape for the PGA Championship, which tees off May 16 at Bethpage State Park in Farmingdale, Long Island, despite 16 consecutive days of rain and/or an overcast gloomy mist. And despite the course receiving 1.2 inches of rain Sunday and an additional inch leading up to this past weekend, the playing surfaces made it through very well, according to Andrew Wilson, director of agronomy for Bethpage State Park.

“Last week, local PGA pros played Bethpage Black in a charity outing, and they were surprised and happy with the firmness of the greens,” said Wilson, who has been working on course conditions at Bethpage full-time since 1994 and graduated from Rutgers University’s turf school in 2000. He and Mike Hadley, who has been the superintendent for Bethpage Black since 2013, have been working on getting the course into ultimate shape for the pros since it was announced in 2013 that it would be hosting its first PGA Championship. The PGA Championship became the second major on the men’s calendar when it moved from August to May this year. Bethpage Black hosted the U.S. Open in 2002 and in 2009 and will host the Ryder Cup in 2024.

The fact that the course was not aerated this spring or last fall has helped the greens remain firm despite the rain.

“As superintendents, we’re always perfectionists," Wilson said. "We’d like the greens to be a little firmer, but we’re content with where we are, and hopefully the weather will cooperate in the next week and a half."

If by chance the course gets deluged by rain during the competition like it did for the 2009 U.S. Open, when the final-round finish had to be pushed to Monday, “the plan of attack includes squeegeeing the greens and fairways to get water off and using pumps, if we need them,” said Wilson. “During the 2009 U.S. Open, when each round bled into the next day, we were able to roll the greens and keep them firmer and faster than people expected. We’re professionals, and we have our ways.”

"We were concerned about the weather, not so much about the actual dates, but more concerned about what the weather would be like for the build' because we bring everything in months ahead of time to begin setting up," he said. "But we were very fortunate we had a mild winter in terms of no snow. It’s not very nice working in the cold and wind, but nonetheless, our crews did such a great job in getting this ready. ... It’s hard to believe it’s here.

“Andy and his staff have done a tremendous job in getting the course ready,” Reid added. “We couldn’t have asked for anything better than what the condition of the golf course is right now. It’s outstanding. We were concerned whether we’d get the rough to where we’d like it, but fortunately with some warmer temps over the last couple weeks, the rough is just fine. The Black Course is difficult already without the rough, but everyone is happy with where we’re at.”

Ultimately, Wilson said that the superintendents and the grounds crew members, which number over 100, prefer when all the attention is on the greatest players in the world.

“The competition is what people tune into," Wilson said. "We want to have a fair course. We hope to fade into the background. The players are the ones people want to see; we just want to build a great stage.”

And that great stage is a golf course where this saying greets those who dare to play it as they approach the first tee: "-WARNING- The Black Course Is An Extremely Difficult Course Which We Recommend Only For Highly Skilled Golfers."
Ann Liguori/WFAN

Next Thursday, when the 101st PGA Championship gets started, the "highly skilled golfers" will encounter an extremely challenging test because of the course’s length, elevation, tight fairways, deep bunkers and varying wind direction, particularly on the last four holes.

The front nine is generally a bit easier than the back. The first two holes are manageable par 4s; the third hole gets tougher as a 230-yard par 3. The 517-yard, par-5 fourth hole is one of the most photographed holes in golf and features a glacier bunker that crosses the width of the fairway. The 520-yard seventh hole will play as a par 4 instead of a par 5. That will require length and accuracy. The eighth is a long par 3, playing approximately 210 yards. The ninth hole is a difficult hole in terms of scoring average, even though it has the widest fairway on the course, but the uphill and downhill lies make it tricky.

Then you make the turn, and holes 10, 11 and 12 are long, tight par 4s with not much room for forgiveness and deep bunkers. They are very difficult holes to birdie. Holes 15 through 18 are another tough stretch because of the elevation and what will surely be a boisterous crowd. The 17th is a monster par 3 playing 215 yards. And although the 18th is only 411 yards, the wind can be shifty, and there are a lot of sand traps. The finishing hole certainly tests a player, both physically and mentally.

And with Mother Nature always having the last say, throw in some "weather" and Bethpage Black will continue to remain one of the toughest tests in golf.