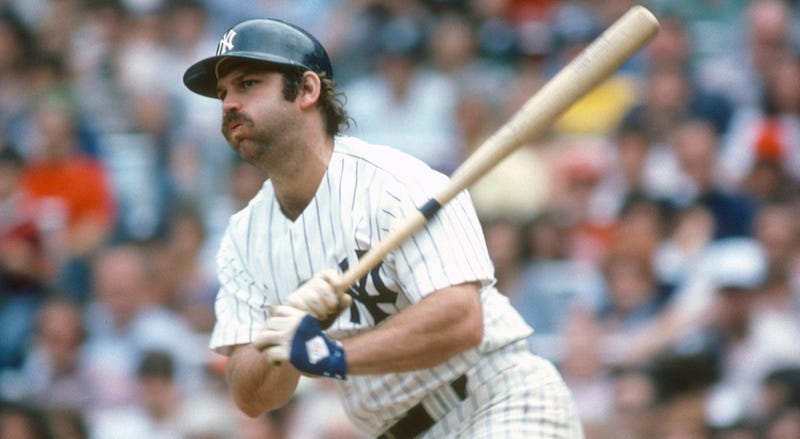 Has any player in Yankees history ever had a harder job than Jerry Narron?

Babe Dahlgren replaced Lou Gehrig, but no one yet knew Gehrig’s condition was fatal, and he lived for two more years after ending his famous streak in 1939.

Narron went behind the plate as Yankees catcher one day after starting catcher and team captain Thurman Munson was killed in a plane crash that took place 40 years ago Friday.

Narron was the Yankees' backup catcher, a 23-year-old rookie, in 1979. Now 63, Narron was at Yankee Stadium this week as the bench coach for the Arizona Diamondbacks.

“It’s not just the first week in August,” Narron said when asked if this is a week that brings back some tough memories. “I think about Thurman a lot.”

The most memorable game from that week in 1979 is typically referred to as the Bobby Murcer Game. It was played on Aug. 6, the day of Munson’s funeral, four days after the fatal plane crash in Canton, Ohio. The entire Yankees team flew to Canton for the funeral that morning, and Murcer gave the eulogy. That same night, back in New York, Murcer hit a three-run homer and a walk-off double to drive in all five runs in a 5-4 win over Baltimore.

But it’s the game on Aug. 3, also against the Orioles, that is sometimes forgotten and just as emotional.

The Yankees considered cancelling the game, but relented after Diana Munson told Murcer that her husband would have wanted them to play.  And so the Yankees played, with Narron as their catcher.

Drafted by the Yankees out of high school in Goldsboro, North Carolina, in 1974, Narron had gotten to know Munson in spring training the previous three seasons. Narron got a taste of Munson’s sense of humor the first day of live batting practice, as Munson got into the cage with Narron in catcher’s gear behind him.
Stan Szeto/USA TODAY Images

“He looked at me and said, ‘You want my job, don’t ya?’” Narron recalled. “I said, ‘Yeah,’ and he said, ‘Well, let me practice on my foul tips.’ And the first pitch he swings and fouls it right off my mask. I don’t know how he did it, but he was just messing. He was always doing stuff like that.”

Narron had a brief September call-up in 1978 but did not get into a game. He made the team out of spring training in 1979, a rookie backup on the club that had won three straight American League pennants and two consecutive World Series titles. He admired everything about Munson.

“He was very athletic,” Narron said. “He wasn’t your (by-the-book) technique-type catcher. He did a lot of things athletically. If he caught the ball down in the dirt, he was going to throw it from down in the dirt. If he got it far out from a right-handed hitter, he’d throw it sidearm if he had to. But he was just so athletic. He ran much better than people think. I would have loved to have seen him hit against these shifts they have today, because you couldn’t put three on the left side, he’d have worn that right side out.”

And the persona that still resonates with fans 40 years later -- that is very much ingrained in Narron’s mind.

“I understand completely how the people in New York loved him,” Narron said. “The fans loved him because he was a tough guy, played hurt, played tired. Just an outstanding competitor, played with a lot of heart and passion and it was a pleasure to be with him.”

The tragic news came on the afternoon of Aug. 2 suddenly and shockingly. George Steinbrenner personally called a handful of the team’s veterans to tell them their leader, who they had just played with the night before in Chicago, had perished. Those heartbroken teammates then informed the others. Narron got his phone call from Catfish Hunter.

“Just like everybody else, complete shock and sadness,” Narron said of his reaction. “You think first about his family before you even think about the team. But a very difficult time for all of us ... really devastating to everybody here.”
Getty Images

Before the game on Aug. 3, Steinbrenner told Narron not to take the field with his teammates right away at the start of the game.

“Mr. Steinbrenner came to me and told me that he wanted home plate left empty,” Narron recalled. “He said when we go out of the dugout be next to (bench coach Yogi Berra), and Yogi will let you know when to go out on the field.”

After a heart-wrenching pregame tribute, the other Yankees starters went to their positions, while Narron stood with the rest of the team in front of the first-base dugout. All the Orioles were standing in front of their dugout. The umpires stood alongside home plate. There was no catcher on the field.

What began as a moment of silence turned into an extended ovation. Chants of “Thurman, Thurman,” rang out loud from more than 51,000 fans. Not even two announcements by PA man Bob Sheppard could quell the crowd.

“It was about 15-20 minutes,” said Narron, who was still standing in his catcher’s gear in front of the dugout. “And I think Yogi said, ‘If you don’t go out there, this thing might go on forever.’”

Narron finally took his position. Yankees starter Luis Tiant began to warm up, and the game got underway. The Yankees lost 1-0, held to six hits by Baltimore’s Scott McGregor and Tippy Martinez.

The Yankees lost 5-4 the next day before beating the Orioles 3-2 in the third game. Then came the day of Munson’s funeral and the Murcer Game, replayed several times each year on the YES Network.

Another rookie, Brad Gulden, started that game behind the plate. It was only his fourth major league game. Narron came in for him later in the game and spilled out of the dugout with his teammates for a celebration after Murcer’s two-run, ninth-inning single lifted the Yankees to what is still considered one of the most emotional victories in franchise history.

“It was awesome to see Bobby get the winning hit,” Narron said. “Those guys who had been with Thurman the longest. It was difficult for all of them, especially for Bobby.”

Narron shared catching duties with Gulden for the final two months of the 1979 season.

Narron was traded to Seattle after the season and played parts of the next seven seasons with the Mariners and Angels. He has spent over 30 years coaching and had managerial stints with the Reds and Rangers.

There are things about Munson that make Narron smile and laugh. His advice on dealing with manager Billy Martin comes to mind.

“Thurman says, ’Let me tell you something about Billy -- if he ever looks like he’s pissed off at you, go ahead and hit him before he sucker punches you!’” Narron said

He cackles telling that one.

But as with everyone who knew Munson, there is also great sadness. Especially when Aug. 2 rolls around every year.

Then Narron stares out, and his voice trails off a little.

Follow Sweeny on Twitter at @YankeesWFAN.
WFAN is the flagship station of the Yankees. Tune in to 660 AM or 101.9 FM this season to hear all the action.