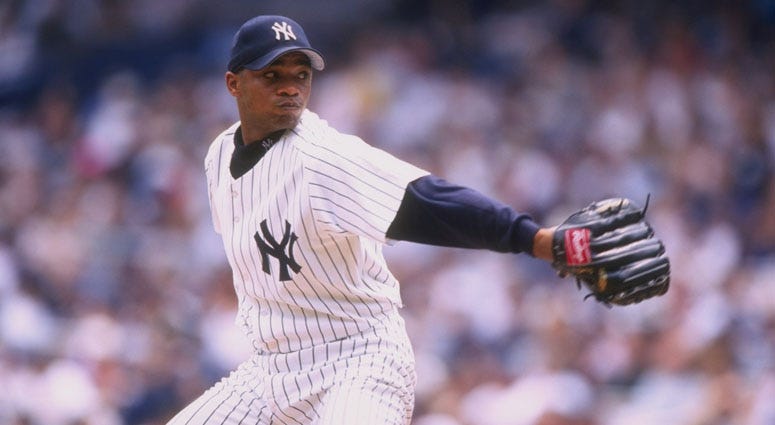 Finding the guy who can pitch in New York under the pressure of the October spotlight. It’s an annual event it seems for Yankees general manager Brian Cashman. He’ll probably never find anyone better at that than Orlando “El Duque” Hernandez.

A fan favorite for his distinctive leg kick and postseason dominance, El Duque appears to be much happier these days. Not that he was a brooding soul when he played, but he could certainly be moody with the media, coaches and even teammates -- he once had a pregame scuffle in the clubhouse with Jorge Posada.

But in a 20-minute chat over the phone earlier this month, El Duque was laughing easily and often as he recalled some of his biggest moments as a Yankee.

And what is there not to be happy about?

“I have good friends, a good life. I play golf (3 handicap), and work at ESPN Deportes. I enjoy my family and enjoy my friends and watch a lot of baseball, man,” says the 53-year old father of five (ages ranging 29 to 4) and grandfather of two.
Joe Raedle/Getty Images

Hernandez was a star pitcher for the Cuban national team for a decade before defecting in December 1997. He landed with the Yankees in March 1998 on a four-year, $6.6 million contract that Cashman has always claimed as one of his best deals, dollar for dollar.

El Duque went 61-40 with a 3.96 ERA over parts of six seasons for the Yankees from 1998-2002, then again in 2004. He also pitched for the White Sox, Diamondbacks and Mets in a career that lasted parts of nine major league seasons and also included minor league stops with the Nationals and Rangers organizations. He officially retired in 2011.

These days Hernandez is an analyst for ESPN’s Spanish language radio and TV broadcasts. He was at Yankee Stadium last month for a Sunday night Yankees-Red Sox game and has worked postseason broadcasts the last few years, including the 2017 ALCS between the Yankees and Astros.

It was in those October moments when El Duque shined, going 8-1 for the Yankees teams that won three straight World Series titles from 1998 to 2000. He was named the MVP of the 1999 ALCS victory against Boston.

What was his secret to October success?

“I never separated a postseason game from a regular season game or a World Series game,” Hernandez says. “Never. I think every time in my mind: ‘This is a baseball game. That’s it.’”

I tell Duque that to the rest of us it looked like he pitched better in the postseason, that he took things to another level.

“OK,” he says. “I pitch good under pressure.” And then he laughs a good laugh.

On only one occasion did Hernandez admit to being a little nervous: his first major league start, June 3, 1998.

“Oh yeah, why not? I’m human,” he says. “But I remember the guys around me, everyone was worrying about my first game more than me.”

El Duque credits coaches Mel Stottlemyre and Jose Cardenal (a fellow Cuban) as well as Posada, the Yankees’ longtime catcher, with calming what nerves he had, and then he fired seven innings of five-hit, one-run ball, walked two batters and struck out seven in a 7-1 win over Tampa Bay in front of 27,291 at old Yankee Stadium. It was the first of his 90 major league wins, the last of which came with the Mets in 2007.

Even after going 12-4 with a 3.13 ERA in 21 starts for the 1998 Yankees juggernaut, there was still some mystery about how Hernandez would pitch in the postseason.

Because the Yankees swept the division series over Texas in three games, that first postseason start didn’t come until Game 4 of the ALCS in Cleveland, and even worse was that the Yankees were staring at a 2-1 series deficit, in danger of wasting their historic 114-win regular season.

Told the night before by Cardenal that he would be pitching Game 4, El Duque replied with a calm, cool “OK, thank you.”

The next day, manager Joe Torre spotted his starter in the hotel restaurant, relaxed and enjoying time with his family. Hernandez even helped a busy waitstaff bus tables and hand out menus, so the thought of him being nervous quickly escaped Torre’s mind.

Turns out that Hernandez really did treat every game the same. Why would he have been nervous for that one? As Torre, Stottlemyre and others prodded him about being ready for his first start in 15 days, El Duque couldn’t help but wonder what the big deal was.

“Why is everybody asking me about the game tonight? Tonight is a baseball game,” he said he was thinking to himself. “I didn’t know how important it was for us.”

Seven scoreless innings later, the Yankees beat the Indians 4-0 to even the ALCS at two games apiece. They didn’t lose again that October, and El Duque picked up another victory in Game 2 of the World Series against San Diego with seven innings of one-run ball.

Hernandez would help the Yankees win two more World Series titles in 1999 and 2000. He added a fourth World Series ring with the White Sox in 2005.

In his broadcasting role these days, it’s hard for Hernandez not to notice the change in the game, all the hard throwers. But it’s no surprise that velocity isn’t the only thing that matters to a pitcher who had the varied arsenal that El Duque had.

El Duque was a classic everything-but-the-kitchen-sink kind of pitcher, one who would throw whatever he could toward the strike zone, using that leg kick and multiple release points to get hitters out.

“I go to the mound with the three C’s,” he tells me. “Cabeza, Corazon and Commando.”

Head, Heart and Command. El Duque had it all, and still does have it all. Born in Fidel Castro’s Cuba he is now living the American dream.

I ask what he thinks his life would be like if he never came to the U.S.

“I have no idea, but I think maybe no good,” he says. “Free is the best thing in life.”

The day we spoke was July 5, one day after Independence Day.

WFAN is the flagship station of the Yankees. Tune in to 660 AM or 101.9 FM this season to hear all the action.