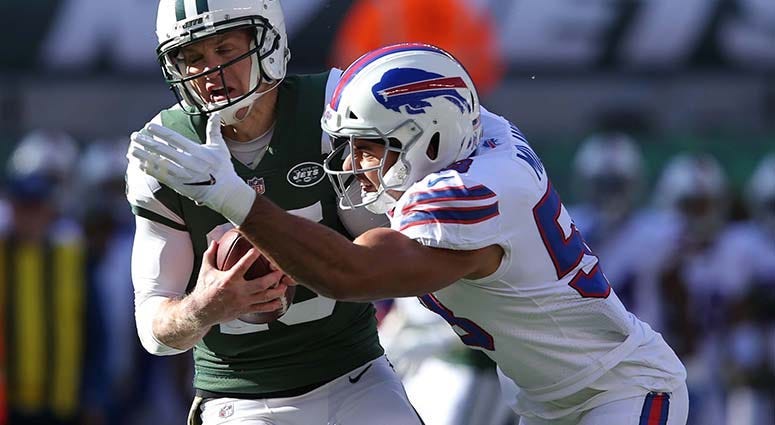 Matt Barkley had just put the finishing touches on a stunning victory when he jogged over to the sideline, found his mother in the stands and handed her his well-deserved game ball.

It was quite a moment for the Buffalo Bills quarterback, who looked nothing like a guy who had no job and an uncertain future just a few weeks ago.

Barkley sparked Buffalo's bumbling offense with two touchdown passes, including one to offensive tackle Dion Dawkins , LeSean McCoy broke out of a season-long slump with 113 yards rushing and a pair of TD runs, and the Bills embarrassed the New York Jets 41-10 on Sunday.

"For me, I knew I could play in this league," Barkley said. "To get back out there after two years, it was, and I don't want to be cliché by saying it was like riding a bike, but I've done this for years. I feel like I was made to play football and (today) was an example of going out there and doing what I was made to do."

Barkley made his first start in nearly two years, and looked the best of any of the four quarterbacks the Bills (3-7) have trotted out this season. The 28-year-old journeyman was 15 of 25 for 232 yards while helping Buffalo snap a four-game losing streak as the Bills put up 451 yards of total offense.

Barkley got the nod from coach Sean McDermott ahead of the ineffective Nathan Peterman despite having just two weeks of practice with the Bills since signing on Oct. 30. Rookie Josh Allen has missed four straight games with a sprained right elbow, and Derek Anderson is sidelined with a concussion. Barkley's last start came in the 2016 season finale for Chicago.

Now the question is: Should Barkley be the Bills' starter moving forward?

"I don't know," Barkley said. "That's a question I don't have the answer to, nor the authority to answer. I'll be ready to play. This QB situation seems to be fluctuating. In whatever way I can help this team, that's my goal."

Added McDermott: "Give me some time on that."

Meanwhile, the hot seat under coach Todd Bowles reached a boiling point as the Jets (3-7) got completely manhandled by a team that entered with a league-low 96 points and had two touchdowns in its previous four games.

The Jets have a bye-week break and the future of Bowles, in his fourth season, is in serious doubt. Owner Christopher Johnson declined comment to reporters after the game.

New York started 39-year-old Josh McCown in place of injured rookie Sam Darnold, but he couldn't prevent the Jets from their fourth straight loss in front of a frustrated fan base that booed lustily throughout.

McCown was 17 of 34 for 135 yards with two interceptions, and the Jets finished with just 199 total yards.