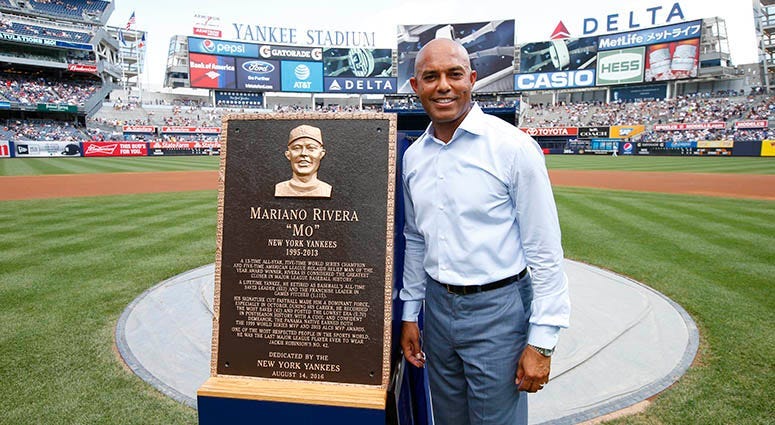 It's now official. As everyone on the planet expected, former Yankees closer Mariano Rivera was elected into the baseball Hall of Fame on Tuesday -- the first-ever unanimous selection to Cooperstown.

Rivera spent all of his 19 seasons with the Yankees. He began his career as a starting pitcher but struggled before being moved to the bullpen, where he would establish himself as the most dominant closer in MLB history. The rest is history.

There are so many classic Mariano moments to look back on, but let's take a look at the five greatest in his Hall of Fame career:

Rivera's 13th and final All-Star Game appearance came at none other than ... Citi Field. It was the second-best place besides his own ballpark where he could be given his final All-Star send-off. I was at this game, and it was a pretty special moment to see in the rival ballpark. Even Mets fans were standing up and tipping their caps to baseball's best closer. Rivera came out in the bottom of the eighth inning to "Enter Sandman" and a huge ovation from the crowd. He pitched a 1-2-3 inning and went on to win All-Star Game MVP. It made him the only player to win an MVP in an All-Star Game, league championship series and World Series.

Rivera was able to close out four World Series championships for the Yankees -- 1998, 1999, 2000 and 2009. This one truly stands out coming against the Mets -- and with Mike Piazza at the plate. The Mets catcher came up to the plate as the tying run, and off the crack of the bat, the ball looked like it had a chance to leave the park. Instead, it was caught by Bernie Williams in center, and the series was over in just five games. It gave the Yankees their third straight World Series title and put the exclamation point on the iconic dynasty.

Everyone remembers Game 7 of the 2003 ALCS for Aaron Boone's walk-off home run to left against the Red Sox in the Bronx. Many, however, forget that Rivera is a big reason they were even at that point in the 11th inning. He entered the game in the ninth inning and didn't allow a run. Same for the 10th, and same for the 11th, as he tossed 48 pitches in total. It was the second-longest relief appearance of Rivera's career, and it came at the perfect time, helping to send the Yankees to the World Series. Rivera won the ALCS MVP for his tremendous performance.

Rivera was sensational yet again in the 2009 World Series, his final title and the most recent Yankees championship. He pitched in all four wins, tossing 5 1/3 innings and not giving up a run. The Phillies could not do a thing against Rivera, as he allowed just five baserunners. He pitched two innings in Game 6 en route to the victory. It capped off a magical first season at the new Yankee Stadium and gave Rivera his fifth world championship -- a ring for each finger.

Recording career save No. 602 on Sept. 19, 2011, to pass Trevor Hoffman's 601 and officially become the greatest closer ever is Mo's best moment, even if it did come in front of a sparse make-up game crowd on a Monday afternoon. Rivera left the field but came back out to the mound, thanks to his teammates, to receive a big ovation for the record-breaking save.