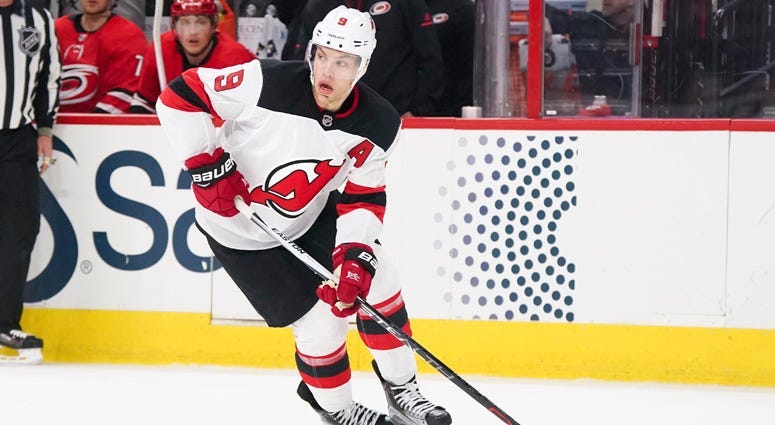 LAS VEGAS (AP) — Taylor Hall doesn't love public speaking, and the New Jersey Devils forward's nervousness grew while the NHL Awards show moved along.But after Hall and the hockey world watched moving tributes to the Humboldt Broncos and the victims of two mass shootings, he was ready to accept the Hart Trophy with the proper perspective."It's not all about you," Hall said. "It's not all about winning awards. It's about enjoying life and doing what you love."Hall was named the NHL's most valuable player Wednesday night, becoming the first New Jersey player to win the award after edging Colorado's Nathan MacKinnon in a close vote.

MORE: Lichtenstein: Devils Can Fortify Defense In NHL Draft, Just Not Right AwayThe hometown Vegas Golden Knights also went home with four trophies in recognition of their incredible expansion season from a celebratory and occasionally somber evening at the Hard Rock Hotel and Casino.Hall, who finished sixth in the league with 93 points, beat out fellow first-time Hart finalists MacKinnon and Anze Kopitar of Los Angeles. Hall got 72 first-place votes and 1,264 total points in the voting, while MacKinnon got 60 first-place votes and 1,194 points.Hall likely got the nod over two worthy contenders because of the way he carried the Devils offensively while they rebounded from a last-place finish in the Eastern Conference and reached the playoffs for the first time in five years. Hall put together a 26-game points streak during the season, and he finished with 41 more points than rookie Nico Hischier, New Jersey's second-leading scorer.

MORE: Graziano: Islanders Have To Be Active Leading Into NHL Draft"If there is one thing I'm proud of, it's to be the first Devil to win MVP," Hall said. "At the start of the season, people wrote us off. People have wrote me off, and it feels pretty good standing up here now."Indeed, the award is a sweet validation for Hall, who was traded by Edmonton to New Jersey for defenseman Adam Larsson just two years ago. The Oilers gave up on the No. 1 pick in the 2010 draft, but Hall never gave up on reaching his potential.He reached it on the Devils' top line with Hischier, forming a potent scoring tandem with the Swiss rookie."I was a good player for a long time, and I feel what really brought me to the next level was being in Jersey, playing with my teammates, drafting Nico No. 1 overall and getting to play with him as a centerman all season long," Hall said. "I think probably the biggest reason why I'm up here today is No. 13 (Hischier) on my team, and the trust that (general manager) Ray Shero and (coach) John Hynes have put in me."While Hall closed the show with the biggest trophy, the Golden Knights were big winners as well.Coach Gerard Gallant won the Jack Adams Award, and George McPhee was named the NHL's general manager of the year in recognition of the Knights' immediate growth into champions of the Pacific Division and the Western Conference.High-scoring Knights forward William Karlsson won the Lady Byng Trophy for the player best combining sportsmanship and ability. Defenseman Deryk Engelland also won the Mark Messier NHL Leadership Award for his actions during his team's breakthrough season in the wake of the shooting massacre on the Las Vegas Strip shortly before their first game."It's been a remarkable season," Engelland said. "(We had) a great group of guys. They did a tremendous job putting the group together. For myself, I know there's a lot of other guys in our locker room that could be here right now in my place. It's just an honor, and once we look back on the season, it's pretty special."Tampa Bay's Victor Hedman won his first Norris Trophy as the NHL's top defenseman, while New York Islanders center Mathew Barzal won the Calder Trophy in a landslide as the league's top rookie.Nashville's Pekka Rinne won his first Vezina Trophy as the league's top goalie, while Kopitar won his second Selke Trophy as the NHL's best defensive forward.Connor McDavid won the Ted Lindsay Award as the NHL's most outstanding player in a vote of the players' union membership, but the Edmonton Oilers star was not a finalist for the Hart, which he won last year.New Jersey veteran Brian Boyle won the Masterton Trophy for perseverance and dedication to hockey after putting together an All-Star season in the wake of his cancer diagnosis and healthy problems for his young son.The NHL also welcomed the survivors of the Humboldt Broncos bus crash onto the stage late in the show for an emotional tribute. Darcy Haugan, the late coach of the Broncos, was honored with the Willie O'Ree Community Hero Award.Gallant was an obvious choice over Colorado's Jared Bednar and Boston's Bruce Cassidy after he masterminded the most spectacular expansion season in recent sports history. The Golden Knights went 51-24-7 and handily won the Pacific Division before winning 13 postseason games and reaching the Stanley Cup Final in their first playoff campaign.Engelland was honored for his leadership and contributions to society. The veteran defenseman already was a Las Vegas resident when the Golden Knights acquired him, and he emerged as a public face of the team during its inspirational performances in the wake of the shooting.Kopitar was named the NHL's top defensive forward for the second time in three years after a standout all-around season.Hedman beat out Los Angeles' Drew Doughty for the Norris after scoring 17 goals and racking up a plus-32 rating in another dominant season for the Lightning.Barzal was the runaway winner of the Calder after scoring 85 points in 82 games for the Islanders in his first full NHL season. The 16th overall pick in the 2015 draft scored 20 points more than any other rookie, racking up 22 goals and 63 assists while centering the Islanders' second line.A few trophies awarded in Las Vegas carried no suspense because they were earned based on statistical achievements in the regular season.Washington Capitals captain Alex Ovechkin won his seventh Richard Trophy as the NHL's top goal-scorer, and Los Angeles' Jonathan Quick won the Jennings Trophy for the second time as the goalie for the team allowing the NHL's fewest goals.McDavid won his second straight Art Ross Trophy as the NHL's top scorer.

(© Copyright 2018 The Associated Press. All Rights Reserved. This material may not be published, broadcast, rewritten or redistributed.)