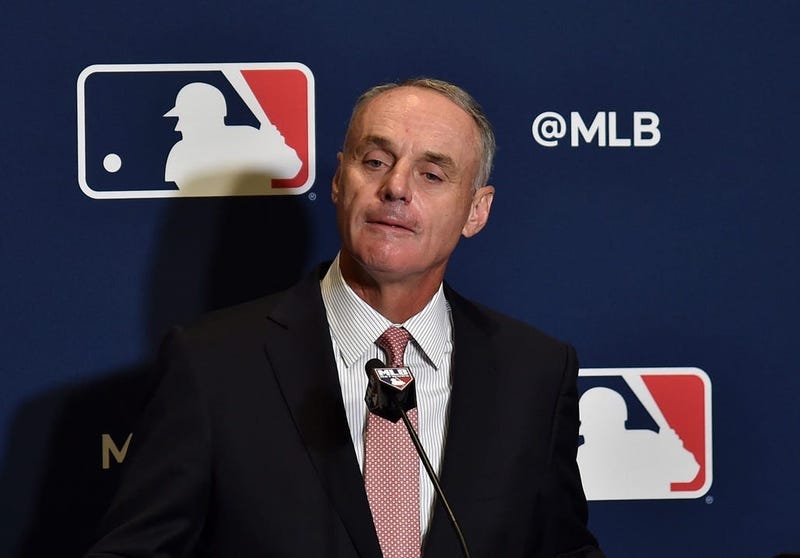 This has been historically difficult year for weather, which has created problems for the teams and fans alike.

"It's actually been kind of tough,” Manfred said. “We've had a record number of games postponed, but even worse, early in the year, I think we played 35 games in April where the game time temperature was 40 degrees or less."

This has raised the question of refiguring the game schedule. There's a delicate balance between overreacting to one year of bad weather and making a positive change to the league. Altering the schedule would incorporate more warm weather cities and domed stadiums early in the season.

"Well, first of all, we don't have enough warm weather, domed sites to actually make a material change in terms of the schedule." Manfred explained. "But you also have to remember, everybody wants to get opened at home at some point. They don't want to play for any extended period of time without a home opener."

Further, he said baseball officials have closely looked at the numbers and firmly believe that this season is an anomaly.

Another debate that's been circulating is the addition of designated hitters to the National League. Boomer and Gio commented that they don't agree with it, but it feels like an inevitable change.

"It has long been a constant source of conversation among fans, among people in the game, but I do not think that we are on a path that inevitably leads to a designated hitter in the National League," Manfred said. "I think it's going to remain a topic of conversation. Outcome to be determined."

Boomer and Gio raised yet another big topic right now: the growing legalization of sports gambling. Manfred was initially against this idea, and the WFAN hosts wondered if his view has changed and how MLB will approach it.

"We understand that it's here to stay. ... We have to expend time, effort, resources to make sure that the increased legalized gambling doesn't become a threat to the integrity of our game," the commissioner said.

"We also recognize that gambling can be a source of fan engagement," he said. "We want our fans engaged with our sport in every possible way and we will take advantage of this new landscape to try to make people even more interested in Major League Baseball."

One of the precautions that MLB will take against letting sports gambling affect its game is attempting to implement an integrity fee, a tax that would have to be paid to the league to keep the game clean. Many are deeming it an attempt to get a cut of the sports betting profit, but Manfred explains why that's not the case.

"Integrity monitoring is a really expensive undertaking," he said. "It's very sophisticated. It involves the analysis of massive amounts of data in order to detect patterns in the betting that can be of concern."

However, he cedes to the accusation that they want to make a profit off of the legalization.

"The fact of the matter is, the sports leagues spend literally billions of dollars to stage these games," Manfred said. "I do not think it's unreasonable to suggest that people who are free riding on our product ... should have to compensate us."

Las Vegas has not had to deal with this issue, so New Jersey is arguing that it should not have to either. Manfred commented on how he's approached this.

"I do not believe that it is appropriate for Major League Baseball ... to rely on a bunch of state regulators to ensure the integrity of our sport. ... Quite frankly, I don't believe they'll be as good at it as we will be," he said.

Boomer and Gio asked Manfred what his main integrity concern is with the rise of legalizing sports gambling.

"The deepest fear is that somehow people involved in betting try to influence the outcome of the game on the field," the commissioner said. "That's the deepest fear."