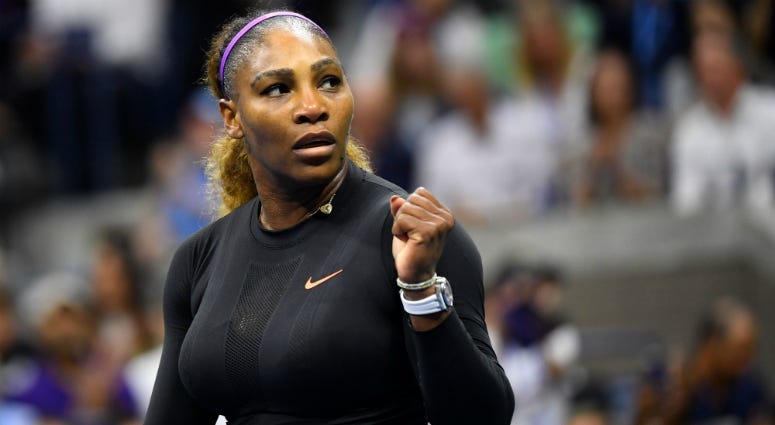 Four players remain in the women’s draw from the 128 players who started.

Only two of the four remaining are ranked in the top ten in the world.

Eight of the top ten seeds have gone by the wayside including top seed and defending champ Naomi Osaka, ousted in the round of 16 by No. 13 seed Belinda Bencic, who has advanced to the semifinals for the first time in her career.

One of the four owns 23 Grand Slam titles, the other three have yet to win a Major.

Bencic, the 22-year-old from Switzerland, will play Bianca Andreescu, the 15th seed from Canada, in the second semifinal this evening. Bencic figured out a way to get through Donna Vekic 7-6, 6-3 in the quarters. Andreescu rallied from dropping the first set yesterday to dispose of Elisa Mertins, 3-6, 6-2, 6-3. Like Bencic, Andreescu is through to her first Grand Slam semi-final.

I like Andreescu’s power game and feistiness. The 19-year-old won her first two WTA titles this year and she’s 7-0 against top 10 players. I’ll go with Andreescu in three sets, over Bencic. Andreescu is quick and on a roll. The two players have never played each other. I think Andreescu will figure out a way to get through Bencic with her power and speed.

The first semifinal at 7 p.m. features the biggest name in the women’s game, Serena Williams against No. 5 seed Elina Svitolina of Ukraine. This is Svitolina’s second straight semifinal. She advanced to the semifinals this year at Wimbledon as well. Svitolina hasn’t dropped a set yet during her impressive U.S. Open. The 24-year-old got rid of Johanna Konta 6-4, 6-4 and showed off her consistency. She’s a human backboard, getting everything back. And practicing with her boyfriend Gael Monfils has made a difference.

Serena was in peak form on Tuesday evening, destroying Qiang Wang, 6-1 6-0 in their quarterfinal matchup in 44 minutes. Serena overpowered and overwhelmed Wang, the 18th seed from China. No mercy. No nonsense.

Serena is too powerful and on too big of a mission to let anyone get in her way at this point. Serena is two match wins away from winning a record-tying 24th Grand Slam title. I’m picking Serena to get through Svitolina in straight sets and then win the women’s title on Saturday to grab her first Major title since the Australian Open in 2017, thus tying Margaret Court’s long-standing 24th Major title record. Since Serena’s last Major win at the Australian Open, she’s been to three Grand Slam finals, only to fall just short.

But this time, it will be Serena, all the way. She has a lot to prove after last year’s controversial loss in the finals to Osaka. She’s more than ready to close this time at the U.S. Open. She’s been calm and cool throughout the fortnight, controlling her emotions. Serena should get it done this weekend and breathe a huge sigh of relief as she continues to make history.