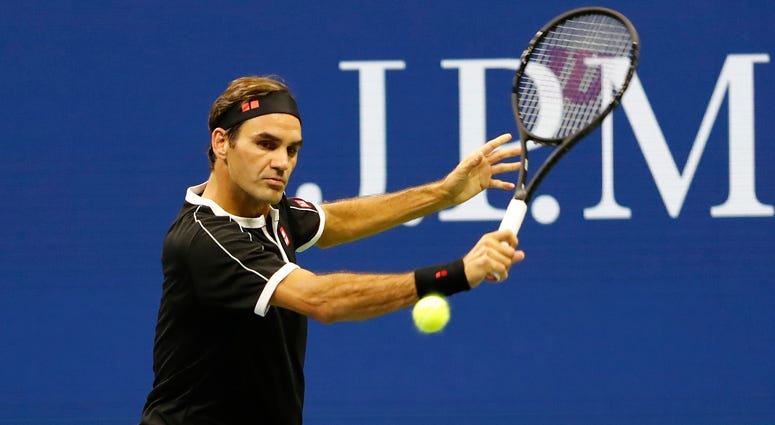 Roger Federer was ahead two sets to one against the unseeded Grigor Dimitrov on Wednesday evening in their quarterfinal match before the 20-time Grand Slam champ lost in five sets. Federer had beaten Dimitrov all seven previous times they had played.

I had the pleasure of watching this match from the President’s Box, sitting directly behind the baseline, and I heard so many Federer fans ask what was going on with the 38-year-old. Why was he so flat? Why was he making so many unforced errors (61 in total)? Why did he need the medical timeout he took after the fourth set? What is going on with Roger Federer?

After the match, he didn’t say much about any physical woes, preferring to keep the attention on Dimitrov’s fine play.

“Well, I just needed some treatment on my upper -- what is it -- back, neck. Just needed to try to loosen it up, crack it and see if it was going to be better,” Federer said. “Yeah, but this is Grigor's moment and not my body's moment, so. ... It's OK."

Federer was asked what made Dimitrov so tough this time around.

“Well, I thought he was tough off the baseline. He mixed up well, which gave me all sorts of problems with the rhythm. Could never really feel comfortable off the baseline. That's something in the past I've always been able to dominate, I'd say. That was not the case tonight. He did a good job there.

“He has the arsenal to do all sorts of things,” added Federer. “He used it all tonight to great effect.”Dimitrov was asked what he did differently to beat Federer for the first time in eight tries.

“Well, everything was different," he said. "I mean, different circumstances, different court, different time of the tournament. I mean, I can say so many things that are different."I was more present, to be honest. I was more of myself throughout every point, every game that I played. In the past, it's always been very hard to play against him. He always came out pretty fiery, make an early break."I felt very comfortable from the first point despite the fact that I was missing a little bit here and there. I had a few opportunities. I kept on believing in what I had to do, in my game plan. I was moving really well. I was hitting my backhand pretty good, changing up the shots.”Bottom line, Federer is not the same as the Federer of old. He turned 38 years old on Aug. 8. There are days when he will continue to dazzle and there are matches like Wednesday evening, where his body can’t perform at its top level. He’ll be a step slow. He may not feel 100% physically.

Can he still win a major? Yes, if all the cards fall into place. At the Wimbledon final, Federer had two match points on his own serve in the fifth set and lost to Novak Djokovic. Djokovic was able to take the fifth set tiebreaker. At 12-all in the final set at Wimbledon, a tiebreaker is now played. Djokovic won it, 7-6, 1-6, 7-6, 4-6, 13-12 (7-3).

The best part of Federer's aging is his attitude. He’s a great sport, and even though his body doesn’t always cooperate, he never gives up and tries his best. And he rarely talks about what’s ailing him, preferring to praise his opponent.

Sure, Federer is disappointed, but when you’ve had the career that he has had and a beautiful family (his wife, Mirka, and two sets of twins), losses in tennis can’t keep you down for too long.

Federer said he will next take a break, practice, “reassess and attack from there.”“But got to take the losses," he said. "They're part of the game. Looking forward to family time and all that stuff, so ... life's all right.”