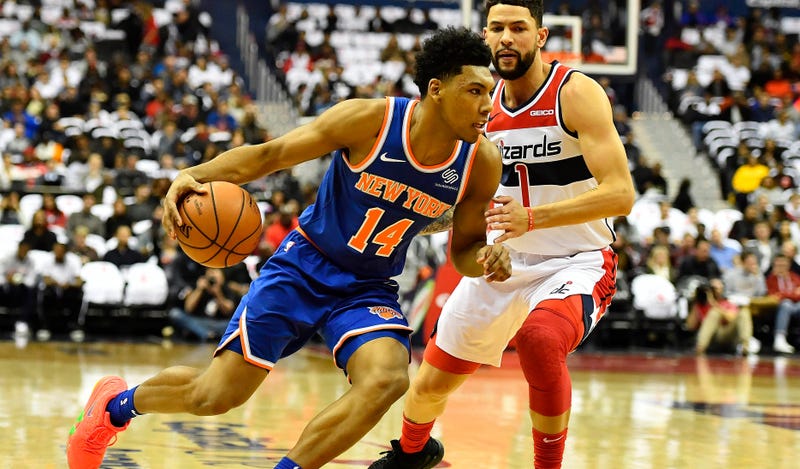 The Knicks rookie class has made the team’s front office look very good through the first ten games of the season. It hasn’t been the team’s top ten selection, Kevin Knox, who has been out with an ankle injury. Mitchell Robinson, the team’s second round selection, has shown a ton of promise, especially defensively.

But neither player has been as impressive as Allonzo Trier. Undrafted out of Arizona, mostly because of two PED suspensions, Trier has been a revelation. In his first nine games (Sunday night’s stats not included), Trier is averaging 11 points in just under 22 minutes per game. His efficiency is the real story. Trier is shooting 53 percent from the field, 43 percent from behind the arc, and 89 percent from the free throw line.

Trier’s True Shooting Percentage is a ridiculous 64 percent, and his Effective Field Goal Percentage sits at 58 percent. His ability to be so efficient despite the fact he is often asked to create his own shot in one on one situations is very impressive. He has a high usage rate for a player with that minutes load, at 20 percent. ISO-ZO is also EFFICIENT-ZO. Those two rarely go together.

If you dig deeper into his numbers, there aren’t any signs that his shooting should crash down to earth either. He is shooting an inflated 57 percent on shots between deeper than 16 feet but inside the three point land, which will likely normalize. His 30 percent shooting on shots between 10-16 feet balance that out to give him a more reasonable 48 percent from mid-range (between the paint and the three point line).

This isn’t a situation like Trey Burke last season, where he was shooting an unreasonably high, and unsustainable percentage on two point shots outside the paint. The primary reason Trier is so efficient is his ability to get to the rim and score at a high rate when he does.

According to basketball-reference.com, 34 percent of Trier’s shots are coming within three feet of the basket. He is making an excellent 73 percent of those shots. Trier has shown the ability to not only create space off the dribble with various hesitation and change of direction moves, but also finish through contact at the rim. 22 percent of his shots are coming from behind the three point line.

Even with 22 percent of his attempts coming from between 16 feet and the three point line, his shot chart is fairly efficient, especially for a rookie. His overall scoring efficiency is downright special for an undrafted rookie playing his first nine games in the NBA. He is carrying over his shooting from his final year at Arizona when he shot 50 percent from the field and 38 percent on threes.

Schmeelk: Hardaway’s Improved Play Helps Knicks Not Only In The Present, But The Future

Trier has shown improvement throughout the season as well. In the summer league, and then the preseason, he would often be caught holding the ball far too long trying to score one on one. While he still does stop the ball from time to time, he is making his decisions far faster and not bogging down the offense nearly as much.

He went through a three game stretch against good teams (Bucks, Heat, Warriors) where he scored 10 points on 4-14 shooting with five turnovers. He tried to score the same way he did against lesser competition in the Las Vegas Summer League and in preseason action and it didn’t work. He adjusted by holding the ball less ad making quicker scoring decisions. In his last four games he has scored 58 points on a ridiculous 23-32 shooting, 3-7 beyond the three point line, and 8-11 from the free throw line in 94 minutes.

He also plays with an attitude and a chip on his shoulder of someone who is trying to prove to everyone he deserved to be drafted. He went right at John Wall on Sunday night, even picking up a technical foul in the process. Trier has the confidence and attitude of a go-to scorer and plays that way nightly. He has been the Knicks spark plug off the bench, and has made Trey Burke’s scoring an after-thought.

Trier even gives effort on defense and is starting to be known for chase down blocks defending transition opportunities. He cares on both ends. He has shown flashes of future potential as a two-way player.

Trier is currently on a two-way contract, allowing him to spend 45 days with the Knicks this season. He’ll reach that limit by the beginning of December, and then the Knicks will have to sign him to a NBA deal. It will cost someone else a spot on the roster, (Luke Kornet? Emmanuel Mudiay?) but Trier has earned it. The Knicks will undoubtedly try to sign him to as long of a rookie contract as the rules allow.

No one deserves more credit than Trier, who is taking advantage of the additional space on a NBA floor, and showing everyone he is more suited to the pro game than the college game. How good can he be? An eventual starter? Very realistic. A good starter? Possible. A 20 point a game scorer one day? It is not out of the question. Trier can score. He is for real. The Knicks found him as an undrafted free agent. Perhaps this new Knicks era will be different after all.

You can follow me on twitter for everything Knicks, Giants and the world of sports at twitter.com/Schmeelk.